It is very easy to calculate the speed of the CPU and the performance of the CPU. For this instance you can just go for the CPU Meter which is a windows 7 gadget. When you focus on the CPU meter you can find two particular meters small and the big one which shows different things together. The big one is how much of your CPU's capacity is being used, and the small one is how much of your RAM is currently in use. They are accurate at the point in time at which they update, but they only update every couple of seconds. I am not sure about accuracy but the "CPU" indicator is how much of the processor's power is being used and the "RAM" indicator is how much RAM (random access memory. the memory that your running programs stuff is in) is being used. 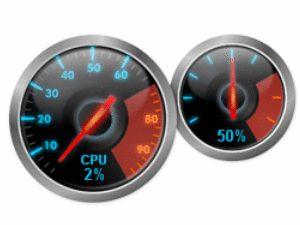 If your computer is slow and one or the other or both indicators are at or close to 100% then your computer is overloaded with too much stuff running at the same time try closing some stuff. Central processing unit will do arithmetic and logic function. To run any application in your pc cpu will send certain commands like our human brain numbers on the meter indicates that how much cpu usage is consumed by the application you launched just type ctrl+ alt+ del and click on process button to know the cpu usage of programs running in your computer. Zero means that the CPU is not being accessed by that process. 5 or 6 means 5 or 6% of CPU is being used.

Add the CPU Meter gadget to the Sidebar

2. Use the readouts to monitor your CPU and memory use. 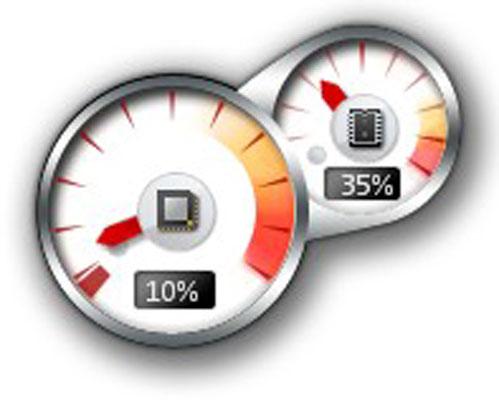 You can monitor the following things:

• CPU Usage monitors how hard your CPU is working to Process various Programs and processes running on your computer.

• Random Access Memory (RAM) monitors the percent of your computer memory that is being used.

You can't make or change any settings that you track with this gadget. It's just a little tool that helps you watch your computer's performance. If memory is almost at 100%, consider freeing some space. If the CPU is at a higher percentage, odds are you've got lots of programs running which could be slowing down your computer's performance; consider shutting some down. 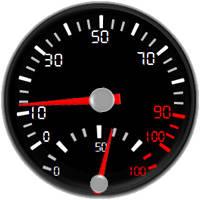 If anything you are looking for something that is taking 90 to 99% of processor power. If this large leap in processor usage I only temporary then you shouldn't worry, yes, even if you are not doing anything. In most cases it is only sporadic. On my Core2 Due machine both cores hit 100% a few minutes after the machine has booted to the desktop. It isn't anything that worries me, because the percentage decreases again quite rapidly. I'd be more worried if the percentage rate stayed at 90 to 100% for hours with you not doing anything.

How to check the temperature of CPU in your computer

Do you feel your laptop is getting very hot? Learn how to check the temperature of your CPU and take steps to keep it cool.

How to install and use Windows 7 CPU Meter Gadget?

Read this article to know about Windows 7 CPU Meter Gadget, its functions and much more information on Windows 7.

How to increase the speed of computer?

This resource deals with the tips and ways to improve the speed of your computer. These tips includes defragmentation, registry clean up utility, use of antivirus with latest updates, use of default themes, removing temporary files and many more.

Review of Piriform's CCleaner- Cleaner and optimization software for Windows

Are you worried that your PC or laptop is getting slow every day? Do you want to increase your hard disk space which is getting reduced due to various changes made? Do you want to fix your PC or Laptop registry errors? If yes, then read this article to know all details about CCleaner software which solves all the above mentioned problems and many more. The article explains the various features of CCleaner and reviews it.