Windows 7 improved a lost compared to Windows Vista in terms of the performance, User Interface, scalability and Security. Many of the operating system security that included Kernel Patch protection, Data Execution Prevention, Enhanced UAC, Fingerprint scanner support, BitLocker. There are so many security features available in Windows 7, some of those are already in Vista and some of them are enhanced and some of them are new in Windows 7.

Action center is the one of the new feature that is available in Windows 7. Action Center combines all the security related feature s and some of the maintenance features together so that all the related features can be organized in one place. Action Center will be quite useful and it will show the message in task bar when Windows 7 finds any issues in the system it will be shown in the taskbar as an icon and by opening the icon in turn will open the Action center it will list all the errors, warning related to security and windows update, System back up notification. All the security related issues can be seen in a place and it can also be resolved easily. The notification itself will give meaningful information to identify the risk easily. It is one of the useful feature to troubleshoot and fix the issues in Windows 7 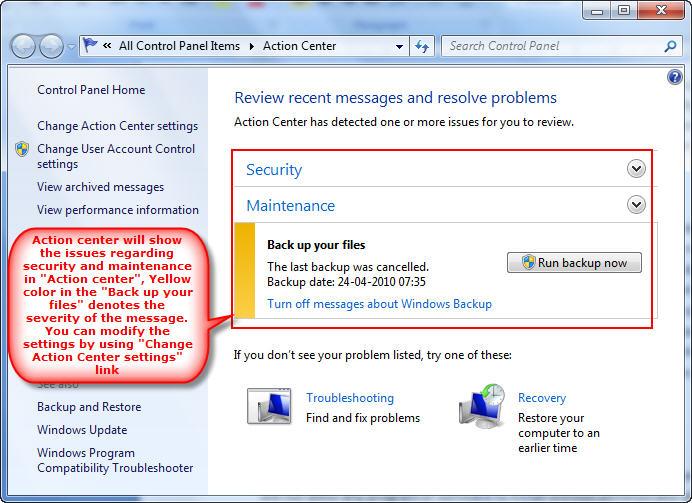 User Access Control (UAC) is invented in Windows Vista and it is improved a lot in Windows 7. UAC will not allow any program or software to install without administrator permission. It is one of the useful features to prevent Malware. Even logged in to the system as a administrator requires privileges to install applications. In Windows 7 UAC is modified to allow actions automatically for the programs which will not cause any damage to the operating system. UAC can be customized in Windows 7. Windows 7 UAC has 4 options for the notifications which is useful to modify the settings. 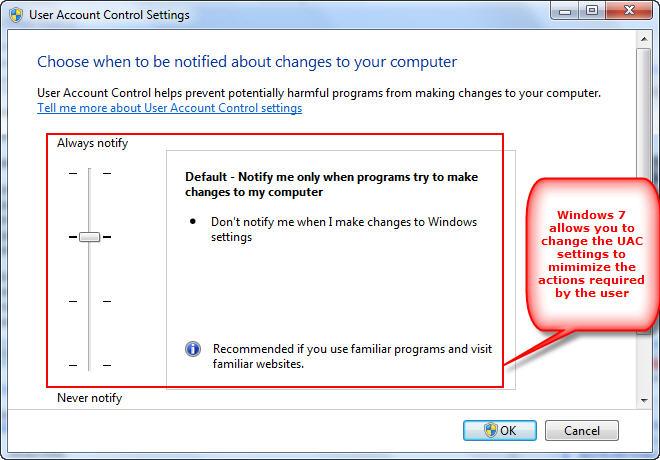 Parental control is used to control Standard system users to login access to certain time, so that the Standard user can login to the system at the specific time set by administrator. You can set a different time for each day.

Parent control restricts the standard user to install or modify or open any software, only allowed software can be opened by the user.

Parental control allows to run specific games based on the rating set by the Admin user. Rating is based on the age level of the game. 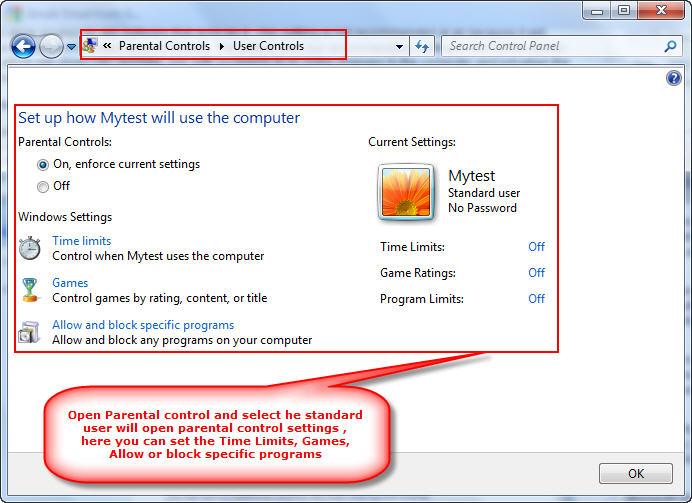 Windows 7 is able to encrypt the external drives. BitLocker is not included in Windows 7 Home edition . When you open the BitLocker applet in Control Panel it will show all the Fixed drives and as well as Removable drives.
While encrypting the drive you can set password and you can create a password recovery key so that if you forget the password also you can recover it by using the recovery key.

Automatically unlock the drive facility is available only for the fixed drives.
It will be useful in the network environment where the files are stored in a USB drive and the files can be encrypted to protect the data from the users to copy the sensitive data. Bit locker tool is very useful to encrypt and decrypt the Flash drive and memory card data.

DirectAccess is a new feature which is included in Windows 7 and Windows Server 2008. This is very useful for the Network users who want to access the office network from remote computer without using VPN with secure access. You can set the group policy settings of a computer from the remote machine which is connected to the internet. It allows the users to connect to the office network from the home network using internet without the need of VPN.

In order to use the DirectAccess feature in Windows 7 you need to have a DirectAccess server which should run in Windows Server 2008 R2 and in client machine should be Windows 7. It requires 2 network cards.

Top 10 Features Of Windows 7 and Its Review

A detailed review about windows 7 and its new feature.I will also describe why windows 7 better than other Operating systems.

For every operating system security is the key factor and it is very much necessary that we need security. This resource is very good in providing information about the security features in windows 7.


Thank you so much for both of your comments. I will do better and post more good resources in the future.