Computers are the powerhouse of the information age. While in the modern world, every computer lying in the homes have music, videos and what not loaded on the hard disks of massive capacities, important documents fill a large part of the computer spaces. While music and movies are important to a home user, nothing replaces the value of the sensitive documents people keep on their computers. Employees all around the world use their personal computers to store sensitive data related to the office and the office PCs are filled with sensitive information.

Cases of cyber information theft are rising with an alarming rate. From the network hacking to social engineering, everything which can be used to gain control over the information located inside the idiot box, the computer are a challenge to the organizations large and small, alike. While there are quite a few methods available to counter the cyber information theft attacks at every level, the first thing which comes to mind is 'Locking the file folder with a password'. A Google search on the internet for file folder protection software which allows you to lock the files and / or folders with a password will reveal a whole lot which would get you everything from crappy freeware, program trials and expensive programs which are not feasible for personal use. Either they are very tough to use, have cluttered interface or are filled with a whole lot of technical terms which make the process unnecessarily complicated.

While it may have been very simple solution for one to consider, or have slipped your fast gazes on the screen or maybe you never bothered to explore the options, but Windows itself comes with a really great feature for encrypting files and what an easy way you can use it! It is the EFS – The Windows Inbuilt File Security (Encryption) Mechanism. If you have never used the feature, you are perhaps at the right place to learn it. Well, actually it's so simple; you would not need anyone's help even. But to start off, here are the steps: 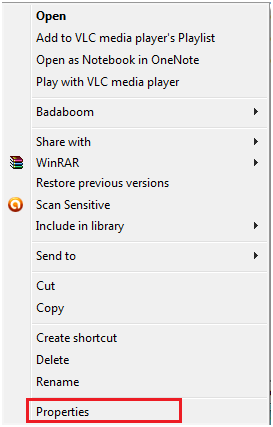 2. On the "general" tab in the properties window, click the "advanced" button. 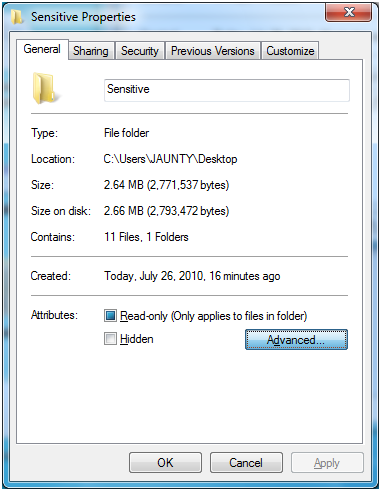 3. Select the option of "Encrypt contents to secure data" and click "OK". 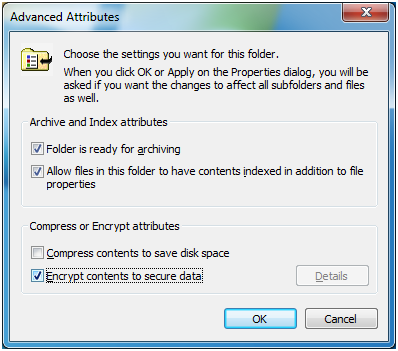 4. Now click on "Apply" On the "Properties" Window. It will ask you a question whether you want to encrypt only the files in that folder or all the subfolders and their files as well. I prefer to encrypt everything but it depends on you in the end. Here I will select the option of encrypting everything inside the subfolders as well. 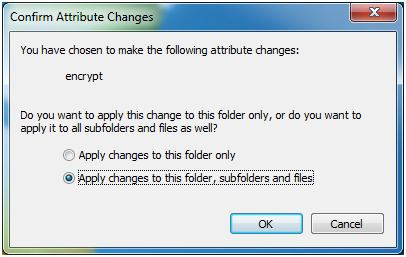 5. Now, a new window may open depending on the size of contents of the folder. If there is a whole lot to encrypt, then the window will remain there and show the progress of things while your computer is encrypting things.

6. After the process is complete, the folder will appear in 'green' color in the Windows Explorer. This would mean that the folder / files are now encrypted. 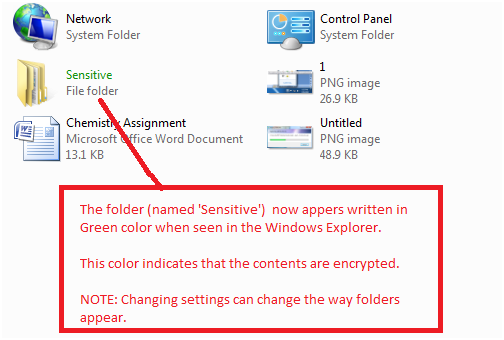 Remember that after encrypting, it is better to backup your keys. Windows prompts you for the same. You can see the icon on the toolbar and click it to follow the wizard and it will backup your keys. Backing up your keys is important. The reason why it is so important is that in case, you happen to forget your password, then the files you encrypted will be encrypted forever and you will not be able to open them, just as someone else is not permitted to. Also, if you happen to save the files on a different partition and re install Windows, the files become inaccessible because the encryption done is related to your Windows account. Even if you create another account with the same username and password upon the re install, the keys are changed. So if you lose the keys, the files will be left encrypted forever! So it is important to backup your keys.

The encryption process transparent when using Windows EFS feature. What we mean by this is that the user who actually own the files (and has encrypted them) will not find any difficulty in accessing them. So when the user who has encrypted the files will double click the file, open it, edit it or saves it, there is nothing which will make him feel that the file is something special and something special has been done to the file. The file is opened just like a normal file. Hence, the process is said to be transparent and the user will not feel any difference, apart from the green colored file names which indicate the encrypted status of the file. But when someone else tries to open the file, the file shows an "access denied" message, or opens in the default program with some garbage as its content. This garbage is actually the 'encrypted' contents. Even if the file is copied using external methods like moving the file to another partition or using Live booting systems< to copy file to external disks or even if the disk is stolen, the file remains intact and will contain only the encrypted contents which make no sense unless the person trying to open the file has the right password to open it.

Now for the last small question, it is called "EFS" because it is implemented as a part of the NTFS file system and is called as "Encryption File System".

This article talks about a trick that you will not discover all over the Internet. It tells you a legal way out using which you can use a trial version software for as long as you wish in Windows Operating System.

How Windows OS came into existence? This article provides the history of Windows operating system.