Linux is one of those exciting topics which draw a computer enthusiast towards it. It is one of those Operating Systems which are rapidly changing the world. While the name might be new for few people, Linux on contrary is not. Linux was born in 1991 and has been under development since then. This Operating System is well known among server administrators because of the high use on servers of all kinds. It is used for teaching system programming in universities and is touted to be more secure than Windows.

While it is easy to get a Linux distribution off the internet, it is not so easy to experiment with it, especially when you have lot of data on your computer and you are not ready to lose anything. Partitioning your hard disk for using Linux on it alongside with Windows is a tough task specially because at times, Linux may not start off from an logical partition well (specially because logical partitions can be created in a more dynamic manner than primary partitions). Moreover in most of the cases, if you partition your hard disk while installing Windows, Windows creates all the partitions except the C: drive as logical partition which makes the task of creating a new primary partition quite problematic. In these cases, you may be never able to install a new Linux Operating System. Moreover the Linux terminology is quite different and technical compared to Windows which makes installing Linux even more difficult for the newbie user.

We all know that one learns by experimenting and in this condition it appears that almost all paths to experimentation are closed. So how would you start using Linux without making a mess of your system and the files on it? The answer is Virtualization. There are many products in the market which can make the virtualization possible. One of the products which lead this field of software is known as VMware Workstation. For those who don't know what virtualization is; Virtualization is a process of running an Operating System inside another Operating System. It visually looks as if you are playing a movie inside a media player; with a difference of the 'video area' replaced by a full 'Operating System'. The following picture might make you understand what running a virtual Operating System looks like: 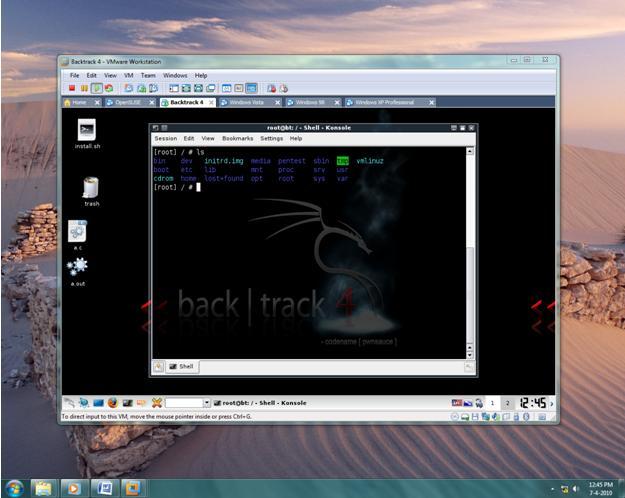 You can see in the above picture that a full blown Linux distribution (Backtrack 4 Linux) is being run inside another Windows 7 Operating System. The Linux system is running inside a window so you can minimize the window and work on other things just like you can do with a media player.

What VMware Workstation is and what it can do

VMware Workstation is virtualization software which can be used to run different kinds of Operating Systems without requiring you to make changes to your disk partitions. All you need to do is to use the VMware Workstation to create a new virtual machine and install inside the virtual machine the Operating System of your choice. This makes things easier than trying to partition the hard disk and later discover that you have lost all your data and you need to start off from scratch again! So VMware Workstation saves you from many problems and allows you the following benefits:

1. No Partitioning in VMware: You don't need to partition your hard disk at all! All you have to do is to create a new file. Of course, you must have right amount of empty space available. VMware saves the 'virtual' hard disk of the Operating System you are trying to install in the system as files so it is mandatory that you have the 'space' available on the disk to accommodate the Operating System.

3. Trying out new softwares – VMware: Almost every one of us is fond of installing any new software we get your hands on. We tend to think that if the software does not give us what it promises then we would uninstall it, which is correct. But installing and then uninstalling software one after another slows down the performance of Windows Operating System significantly and hence it is advised by many that you don't install and uninstall the software one after another repeatedly. But VMware workstation allows you to create a virtual system which you can use to experiment with your new software. In case your virtual system slows down (which would happen someday) then you already know the solution – to delete the virtual Operating System and then install it again! Isn't that a great way to test what's best for you?

4. Snapshots in VMware Workstation: By now you would have already imagined that how easy it would be to experiment and try new and new things with your system and in case of any problem all you would need is to delete the Operating System and reinstall it! But wait; creators of VMware workstation already knew that their software would be used to experiment on things. So they have made a great feature in the software. This feature is "snapshot" and is used to give you the effect of "rolling back in time".

Basically using snapshots you "take a snapshot" of a 'state' and in future you can "return" or "roll back" to that previous state. Let me explain this to you using an example with steps:

Ubuntu has been one of the best open source Linux OS over the years, in this article I tell you the features of the OS and the pros and cons of the OS.