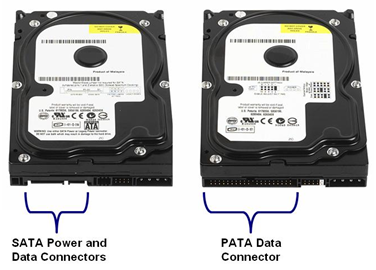 PATA stands for the Parallel Advanced Technology attachment. The PATA drives were used in the previous generations before the existence of the SATA drives. The PATA uses a Parallel bus with 16 bit interface to give connections and for the data transfer. This helps in transferring 16 bit of the data at a time. A 40 pin ribbon cable is used in PATA for the transfer of the data. In a single cable there will be two provisions for the hard disk connection which means that two hard disk can be connected at the same time in on single cable. But the jumper pins are used in the hard disk to discriminate and decide upon the master and the slave.

SATA stands for the Serial Advanced Technology Attachment. The SATA drives are used nowadays after the generation of the PATA drives. The SATA technology is proved to be the best in all the aspects including the speed phenomenon. SATA also helps in reducing the complexity of the wires. This technology was introduced in the year 2000 and it came into existence in the year 2003. It uses smaller cables thus helping in high cycling speeds because there is no synchronization is needed. The routing is very simple with 7 pin cables making the data transfer very fast. Each cable supports only a single device so there is no necessity for the jumper pins in the hard disk. SATA hard disk can be used with the jumper pins removed. 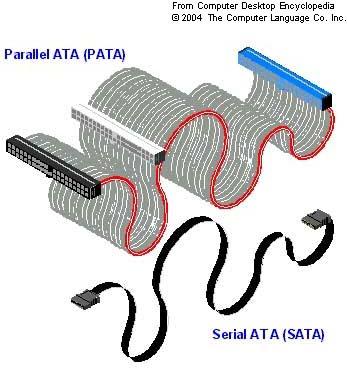 Installing a Hard disk in a system

When we go for the SATA hard disk the hard disk can be inserted in the slots that are available. There will not be any necessity to choose among the master and the slave. There are also options available to keep the jumper pin in master or the slave position. But it is not necessary to take into consideration.

How to install PCI Sound Card in a Computer

I will explain you the steps required in the installation of the Sound card ? Sound card responsible for the sound coming from your PC.

This resource will provide information on steps to identify bad sector formation in hard disk and the steps that are available to keep the hard disk clean.

This resource is for explaining the concept of Multiboot which is also termed as dual-boot. Multiboot feature is nothing but installing two operating systems on one computer. The pre-requisites for having the multiboot feature are also explained here.