Ubuntu is a free open source Linus OS which has won millions of hearts all over the world. Ubuntu which means "humanity towards others", is just serving that purpose by distributing free OS to users who cannot afford to buy one OS. Ubuntu provides an up-to-date, stable operating system for the average user, with a strong focus on usability and ease of installation. Ubuntu can be either downloaded free from the internet or can be requested to be delivered on your doorstep free of cost, with the help of delivery companies, it is sponsored by a UK-based company called "Canonical", instead of making profit by selling the OS they create revenue by distributing the Free OS.

Ubuntu as a Linux is virus free unlike Windows, so there is no need of Anti-Virus. Ubuntu is best used by user who have Windows and Linux side by side with important documents as Linux acts as a safeguard to the PC, whenever Windows crash and there is need to back-up files, Ubuntu can be booted without any problem and back-up can be made from Ubuntu itself. Ubuntu comes installed with a wide range of software that includes OpenOffice.org, Firefox, Empathy (Pidgin), Transmission, GIMP, and several lightweight games to help pass your time. Additional software that is not installed by default can be downloaded using the package manager. GNOME (the current default desktop) offers support for more than 46 languages. Ubuntu can also run many programs designed for Microsoft Windows (such as Microsoft Office), through Wine. Ubuntu is mainly designed for users surfing on the net so Ubuntu has one of the most powerful in-built firewalls for safe internet connections. Ubuntu can also work in a pretty low end computer as it consumes very less resources.

Ubuntu can be installed by a Live CD. Ubuntu can be installed in the computer as only a CD based OS, for users having very less hard disk space or having a "test-drive" of the OS or can be installed on in the hard disk for users who want to use it on a regular/daily basis. The Live CD also contains the Ubiquity installer, which then can guide the user through the permanent installation process. CD images of all the previous Ubuntu can be downloaded from the Ubuntu home page if you find the old OS better and easier to use. Users can download Ubuntu from the Ubuntu Home Page as a disk image(.iso), which can be later written to a CD and used as a Live CD. A Microsoft Windows migration tool, called Migration Assistant, can be used to import bookmarks, desktop background ,and also various settings from Microsoft Windows. Ubuntu and Kubuntu can now also be booted and run from a USB Flash drive making it more portable which is one of the main factors in the modern world, with the option of saving settings to the flash drive. In newer versions of Ubuntu, the USB creator program is available to install Ubuntu on a USB drive. 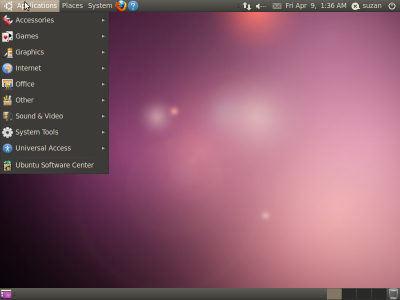 
Download free Ubuntu OS for your desktop from - www.ubuntu.com

Download free Ubuntu OS for your desktop from - www.ubuntu.com