The world is changing, and it needs to change faster. That sentiment has been ingrained in us from a very young age. In the context of technology, that means embracing voice technology that will soon be taking over our lives faster than we can prepare for it.

In the near future, voice will become the new way we interact with our gadgets from music systems to fridges. That might sound a little scary at first but it's time to get used to this brave new world because voice technology is going to be more popular than ever before. The covid-19 pandemic has elevated its use, especially as more people spent time at home in lockdown. 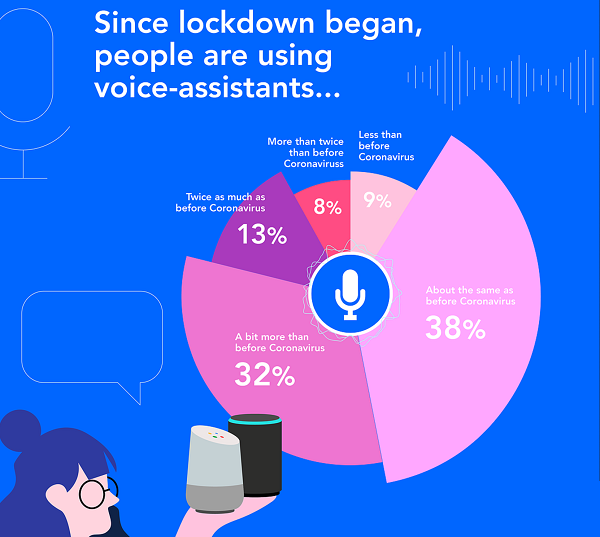 Voice technology goes by a lot of names such as voice-activated commands, voice-control technology, or simply speech recognition. Voice control is already in use by the likes of Apple and Google, who have developed the Siri and Google smartphones now virtual assistants respectively. To date, however, there has always been some kind of screen involved in order to trigger these systems but that could be about to change.

A recent article published by FoxNews, highlights the potential for voice being used in your home without the need to pick up a remote control or fumble around with a touch panel. Imagine being able to ask your TV what you should watch, or asking your fridge what time lunch is served at work tomorrow.

In the near future voice technology will start to become more mainstream, helping us to get ready for it quicker than we might have thought possible. Voice-controlled devices are already here now and they are only going to become more integrated with our lives over the next few years.

Voice technology will be the future and this is why

With a speed of advancement we may have not anticipated, modern age innovations are already shaking up how we interact with technology. We can't take our eyes off of voice and voice recognition technology can help usher in a re-imagining of life as we know it.

How can you use Voice Technology?

Voice technology allows you to control smart appliances and locks via the Ok google app or Amazon Alexa. They are not very expensive, and they make your life easier by allowing you to talk to devices rather than controlling them with physical materials such as remotes or touch panels.

Voice search and recognition services are already relatively well established in the tech industry. Siri and Google Now are both voice technology-based, which allows users to search for information on their phones and laptops by speaking instead of typing. As voice technology becomes more advanced it will inevitably find its way into our everyday lives. It may be as simple as using voice technology to operate your mobile phone or home appliances, or it may be something bigger, like ordering groceries for delivery at home with a few spoken commands.

As these technologies continue to improve we will need to adapt our day-to-day lives to include them. This is not a bad thing, however, in fact, it can make things easier and more convenient than ever before.

What voice technology can do for you?

Companies are developing software that can understand voice commands and execute them.

Nothing is too hard for voice technology, and it will soon be changing the way we use our phones and appliances in order to make life as easy as possible.

Voice technology is on its way to becoming mainstream and it will be here quicker than you think. The potential of voice recognition and command software can do many things that we could have never imagined before, and the tech industry is more than happy to embrace these new innovations.

Many companies are developing apps that make it possible for users to operate their appliances using their voice instead of physical materials such as remotes or keypads. With the growth of voice technology comes a need for users to adapt their day-to-day lives in order to accommodate this new innovation. For example, you might want to purchase a TV with built-in Bluetooth capabilities so that you can control it with your phone or tablet. In the future, you'll be able to control your appliances and make purchases using your voice without ever needing to touch anything.

Apple has created a voice interface for their phones called Siri. It lets you play music, send messages, schedule reminders and more just by talking to your phone. It is an incredible piece of technology but it is also only scratching the surface of where voice recognition may take us in the future. The major tech companies are all working hard on developing more advanced speech recognition software that can respond to a wider variety of commands and requests than ever before.

Google is obviously leading this revolution in voice technology and has developed its own version of an assistant called Assistant. Just like Siri, you can make calls and send messages just by saying what you want to be done. It will even read back your messages to you when it turns on. This is just the beginning of these applications, and they are already getting lots of praise from fans and customers alike.

Samsung also has a version of their own voice assistant which they call Bixby. This assistant allows users to make phone calls, send text messages, schedule appointments, play games, pay utility bills and much more without ever taking out their phone from their pocket or bag.

Bixby has been developed to work alongside Samsung's smart appliances, so when you switch your washer or dishwasher on, you can use your voice to ask for a wash and tell it what type of cycle you want.