As a computer repair technician and IT support professional, I have two indispensable toolkits. The first is a physical toolkit, with screwdrivers, prying tools, pliers, scissors and other useful tools. The second is a USB flash drive containing a wide range of utilities and applications. This flash drive is attached to my keyring and goes everywhere with me. I'd like to describe the contents of this flash drive and hope that this might be useful for anyone just starting off in IT support.

One of the most important things about my flash drive is that it's a bootable drive. This means that it can be used to boot a Windows computer into a mode other than its normal Operating System. This feature has many uses and applications. Probably the most obvious one is for the installation or reinstallation of Windows or a Linux distribution.

It's necessary to create the flash drive as a bootable drive before beginning to fill it up with your tools and applications. In order to do this, I use Easy2Boot. This is a completely free utility which allows you to create a bootable drive, onto which you can copy numerous ISO files. The drive can be created either as a legacy drive using MBR partitioning or as a UEFI drive.

The Easy2Boot website contains comprehensive instructions about how to create your bootable flash drive. Once created and booted you'll be presented with a GRUB menu from which you can select what you want to do next. After you've created your drive, you can then view it in the Windows File Explorer and drag and drop content to the drive in the normal manner. 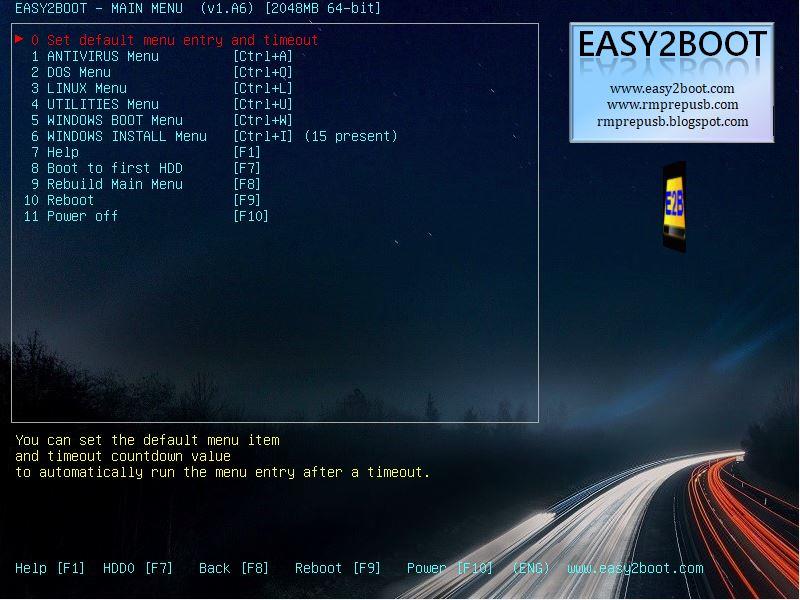 The most useful feature of the bootable Easy2Boot drive is that you can use it to boot your computer into any number of different modes by copying various ISO files onto the drive. These will then appear in the menu when you boot the drive.

My bootable flash drive has quite a number of different Windows installers. Of course, I have a Windows 10 installer and I like to keep this one up to date by always having the most recent release. At the time of writing, that's Windows 10 20H2. I'll usually also have the previous release available and have both the 32-bit and 64-bit versions on the drive. Nowadays it's rarely necessary to have the 32-bit version but it is possible that you could come across an older 32-bit computer onto which you'll be installing Windows 10 for the first time.

As well as Windows 10, I have Windows 8.1 32-bit and 64-bit installers, various versions of Windows 7 (Home Premium, Pro, Ultimate), and even a number of versions of Windows Vista. I like to have these older versions of Windows available in case I come across an older computer which requires a reinstall and whose owner doesn't want to upgrade to Windows 10. In these cases, I would reinstall whatever version they had and activate it using their existing license key.

I have various other ISO files on the flash drive. These include the following -

Aside from the bootable utilities and applications on the flash drive I also have a whole range of applications and tools for use within Windows. I've grouped these all into a folder called My stuff and the screenshot below shows what's there at the moment. I won't go through all of this in detail but I'll highlight what I consider to be my most important and most commonly used applications. Many of the installers on the drive can be readily downloaded from the internet and, if internet access is available, this is often a good idea as in doing so you're sure to have the latest version.

The folders under My stuff are as follows.

You'll see a number of other applications and installers listed on the My stuff screenshot. I won't describe all of these but the following are the highlights.Amongst the other installers in the My stuff directory are installers for popular browsers such as Google Chrome and Mozilla Firefox and popular applications such as Adobe Reader, Dropbox and Spotify.

Summing It All Up

I hope you've found this overview of my own version of the IT support pro's flash drive useful. Many of the tools and applications I've described are the bread and butter of an IT support professional's life and are used repeatedly. I've settled on some of the tools described here after testing various alternatives and can highly recommend just about everything I've described.

This article was written by Norm McLaughlin, founder of Norm's Computer Services, a local computer repair & IT support business in Brisbane, Australia