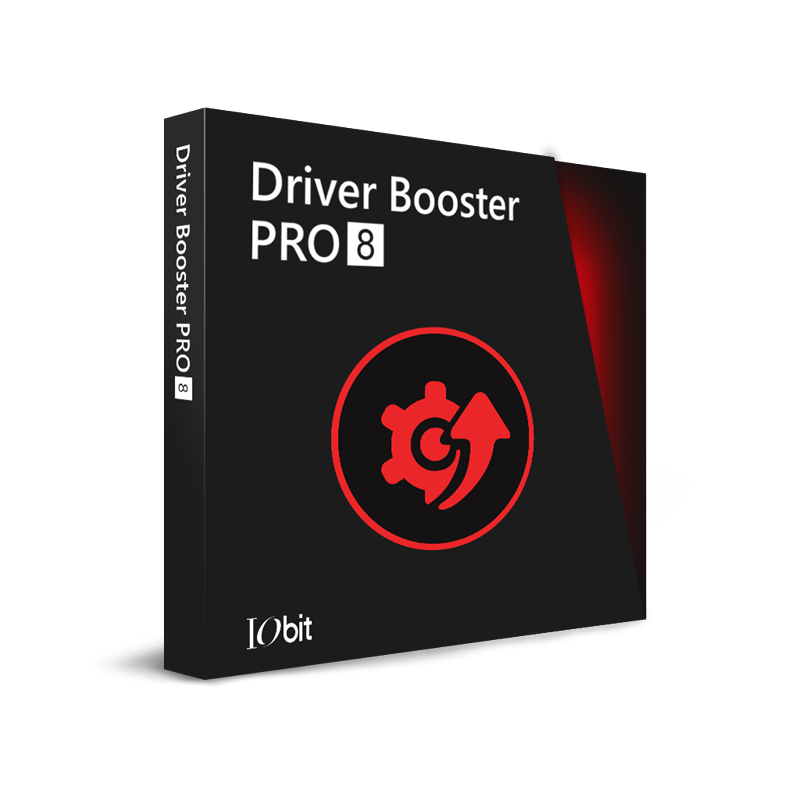 Whether it is updating adapters or drivers on your computer, you can do both these tasks with IObit Driver Booster. It is quite common to have concerns when updating drivers. Microsoft forums are filled with complaints of faulty functionalities after a driver update. But with IObit, all the drivers come from the official manufacturer's website that forms part of the large database of IObit Driver Booster and it backup of older drivers makes the process a bit safer. IObit Driver Booster has passed both Microsoft WHQL (Windows Hardware Quality Test) and its proprietary test that ensures authority as well as security.

As the utility is about driver update, so I shall begin with my system scan to see what results I get. I scanned my system and found 25 outdated drivers and 8 outdated game components, even after a recent Windows update on my system. Some of the updates were related to Intel(R) viz., Intel(R) Dual Band Wireless-AC 8265, Intel(R) Display Audio, Intel(R) Serial IO UART Host Controller – 9D27, Intel(R) Dynamic Platform and Thermal Framework Processor Participant. I updated the drivers as well as Game components but skipped installing some game components that it suggested. It automatically backed up the existing drivers and finished downloading and updating the rest in hardly 4 minutes. 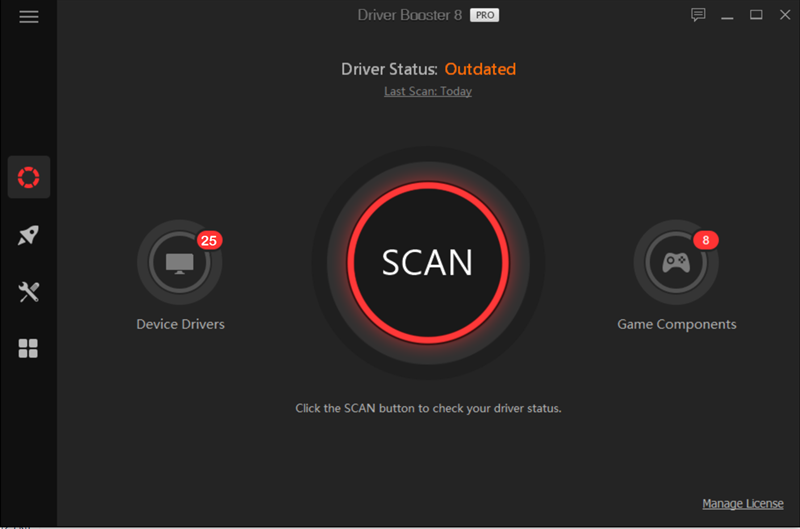 Now moving on to the tools available with Driver Booster utility. IObit Driver Booster has inbuilt 9 useful tools which have been segregated into 2 categories: Fix Common Problems and Other Useful Tools.

Under the first category, you get to work upon 5 common issues viz., fix device error, fix no sound, fix network failure, fix bad resolution, and backup and restore. The second category had an offline driver update tool, software updater, clean unplugged device data, and system info. Since, I had already updated the drivers and had no issue with sound, network, or resolution, I directly jumped to clean unplugged device data and to my surprise found 37 devices data that needed cleaning. 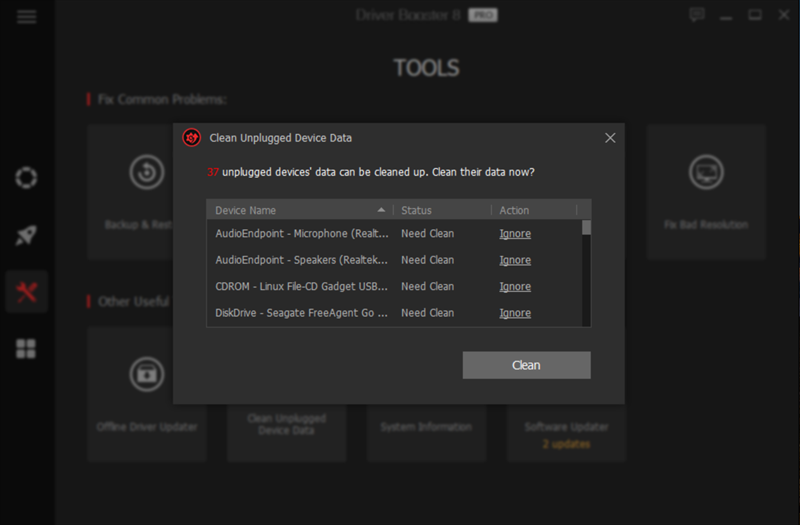 After being done with the driver update I checked the Boost option in the utility which provided an option for Game Boost and System Optimize. The Game Boost option has 2 options for game lovers, of Basic boost and Super Boost depending upon the game being played by the user. It can help user to play even resource-intensive games as well as normal games. Additionally, the option to configure the resources as per your use is also provided, which is recommended for an advanced user having all the basic knowledge of the system and its functioning.

I used the System optimize function and found over 4,000 items that can be optimized and memory of over 650MB that can be released. 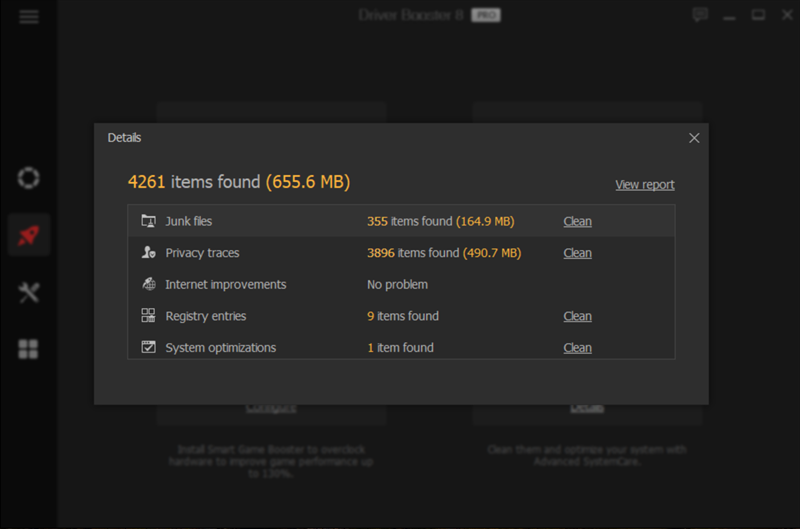 The IObit Driver Boost has taken care of even the basic functions that the user requires in addition to a driver update, hence reducing the need to install another software for system optimization.

Once you click to optimize the system option you will get a pop-up recommending installation of Advanced SystemCare but that is optional and you can skip the same and click on details to continue cleaning your system.

Now let's discuss the details of IObit Driver Booster 8 in a more summarized way to cover all features.

One of the most outstanding features of IObit Driver Booster 8 is its offline update functionality. This is very useful if you want to update your network card. The utility will provide you an easy way to download the driver in advance. So even if you have no internet, driver update will work.

It offers 9 useful tools that fix the most common issues like no sound, bad resolution, network failure, device error, unplugged device data, etc. In a gist, Driver Booster 8 is the best and must-have tool to update drivers as well as boost games, and fix common PC issues.

The scanning speed of driver updater has been improved by almost 100% and installing driver speed by up to 30%, this saves your precious time. Unlike other similar driver updaters like Ashampoo or Slimware, it doesn't waste time in displaying your PC's hardware specs, instead, Driver Booster 8 directly jumps straight to the most important functionality, i.e. displaying your PC's out-of-date drivers.

While updating/installing a new driver the existing driver needs to be backed up and unlike other similar utilities, IObit Driver Booster doesn't prompt for backup but it does that automatically.

IObit comes in 2 versions of Driver Booster: Free and PRO. You can download the newest drivers and get one-click updates, in both the versions but paying $22.95 for the PRO version gets you many other features. PRO version has automatic driver downloads and installation functionality during a PC's idle time and also can prioritize video game-related developer environments and APIs.

The Driver Booster PRO version offers 3 PC license which can be used if there is multiple-PCs at home and one cannot get a better deal than this.


IObit Driver Booster PRO's can enter Full-Screen mode which may seem a little basic feature but some Utilities do not support this feature. With full screen, the Driver Booster PRO has easy-to-read information, while using other utilities a lot of scrolling is involved.

IObit's tool also lets you select the color of its skin, it has a default black color and 6 other options to choose from. It has also provided the color picker option to choose any skin color of your own choice. You can tweak and customize it to suit your preference. For sure, visual customization does not help in improving the utility performance or its ability to scan or download rivers but surely freedom of choice and fresh look is always a welcome bonus. The free version may annoy you with a dedicated slot for advertisement and a 3 PC license for a bargain price of $23 is worth a go.

Driver Booster PRO also empowers you with a handy scheduling feature. You can schedule a time for the utility to check for new drivers and updates (either daily, weekly, bi-weekly, or monthly). Anyway, this feature is available in other similar categories of software.

Q: What is Driver Booster 8?
A: Driver Booster 8 is a PC Driver update utility with a large driver database of over 4.5 million drivers. This huge database never misses a single driver and delivers an update of all the outdated drivers and game components for almost every Windows PC user. The user is offered a customized scanning experience; this program adopts a smart scan engine that provides users with the option of scanning the latest drivers first or to scan the most stable drivers first. Additionally, a new wonderful tool is also added to Driver Booster 8, i.e. the Offline Driver Updater. This tool provides users with an alternative way to update drivers and game components without internet support due to missing/faulty network drivers.

Q: Is Driver Booster 8 free or not?
A: Driver Booster offers both free and paid versions. There is a free version for users, but to make use of advanced features, you must activate its PRO version. It's a 3PC license deal for a price of 1.

Q: What are the system requirements for Driver Booster 8?
A: Driver Booster 8 although much faster and optimized than its previous version still manages to perform very well by consuming very little computer resources at the time of running. It runs smoothly even on a computer with 512 MB of RAM, 1 GHz processor or faster processor, and just 100 MB of free hard disk space.

Q: How to update Driver Booster?
A: Open Driver Booster > Click menu icon on the top left > Click Check for Updates in the drop-down menu.

Q: What other utilities are offered by IObit?
A: IObit offers not only Driver Booster but also the following PC utilities viz.,

It is not uncommon nowadays to have a computer so powerful that it can be used for both work and high-end gaming. The IObit Driver Booster not only updates your system drivers but also enriches your gaming experience by boosting the system resources. For smooth operation of the system, it optimizes and cleans any junk data as well as provides you with notification for software update. This software not only performs exceptionally well in terms of speed but also frees you from looking for any other utility software. IObit Driver Booster is a value for money which you will also vouch for once you use it.