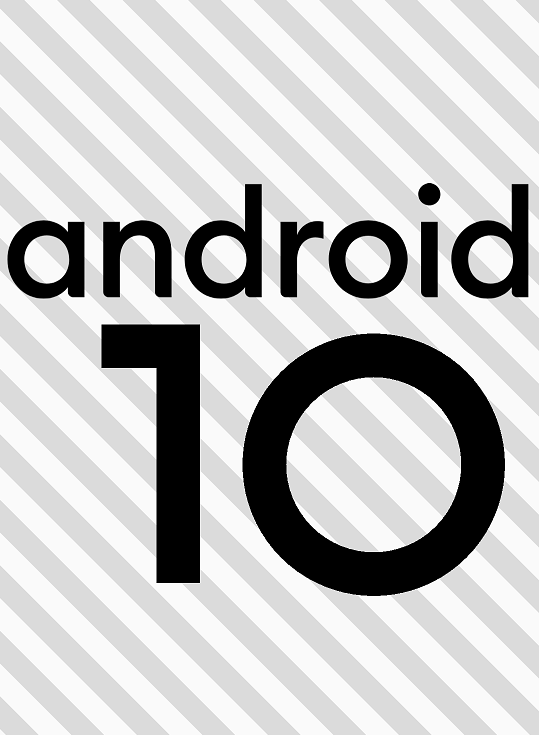 When it comes to the mobile operating system, we generally know of only 2 of them, Android OS developed and owned by Google and iOS developed and owned by Apple. Android mobile operating system is highly popular than iOS and it overtook iOS in 2010 and to date retains that position. The only way it overtook iOS is by providing top-class features bundled with every update. Presently, the latest being Android 10 features that are a craze, that refuse to fade.

The Android operating system is an open-source software based on the modified version of the Linux kernel and other open-source software. The source code of this software is called the Android Open Source Project (ASOP), which is licensed under the Apache License. The android operating system was first launched in the year 2007 and since then, it has not seen back and is continuously evolving and improving. The first Android device was HTC Dream, also called T-Mobile G1, announced in September 2008. The first version of Android was not given any official codename but since then we have been listening to various sweet cookies, chocolate, ice cream, and biscuit name with every update in versions viz., Cupcake, Donut, Éclair, Froyo, Gingerbread, Honeycomb, Ice Cream Sandwich, Jelly Bean, Kitkat, Lollipop, Marshmallow, Nougat, Oreo, Pie, Android 10 and Android 11 (to be released soon).

After the Android 9 release with codename Pie, later release is again coming with normal version name as Android 10 and Android 11. Android 11 although announced is yet to come as an update in smartphones and is expected by mid of September 2020.

Android operating system updates have become pretty frequent and regular security fixes after Android 9 is a common thing. Even before we got used to all the features of Android 10, Android 11 is waiting just outside the door. Android OS updates come bundled with loads of features and new functionalities. Android 10 was one major update that has made Android a favorite among most of the smartphone users. Some of the features of Android 10 were – Live Caption, Smart Reply, Sound Amplifier, Gesture Navigation, Dark theme, Privacy controls, Location controls, Security updates, Focus Mode, and Family Link.

It is a common phenomenon that we hardly utilize all the features and functionalities of our smartphones. Many of us are unaware of these features, so today we will use one of the common and popular personalization features for which we use an additional app or launcher. This personalization we find in most popular launchers like Apex launcher, Nova launcher, Microsoft launcher, etc. These launchers help in changing the look and feel of the mobile by changing the icon shapes, accent color, fonts, etc. Now all these apps have been rendered redundant or limited to smartphones running Android 9 or below as Android 10 has taken care of such personalization and has inbuilt the popular function in the package itself.

We will see (with images) how to activate and use this personalization feature on Android 10 mobile phones. Hoping that Android 11 will take these functions even further.
This feature is named 'Theming' in the developers' mode, so first of all we will see how to enable developer mode on your smartphone. You will have to activate the same as it is a hidden feature which should not be used lightly as it can cause performance issue to your smartphone if not used wisely. So, apply only the steps which are explained here, unless you are comfortable with developer mode functionality.

How to enable developer mode in Android smartphone?

Go to settings, tap About phone, then tap, Build number and then tap build number 8 to 10 times, developer options will be enabled. You will get a message that you are now a developer. Once you go back to the home screen and come back to settings and tap systems\advanced, you will see the Developer option visible there.

Now, since the Developer mode is enabled, you can proceed with activating/enabling the 'Theming' feature on Android 10.

1. Go to settings, then tap on the system: 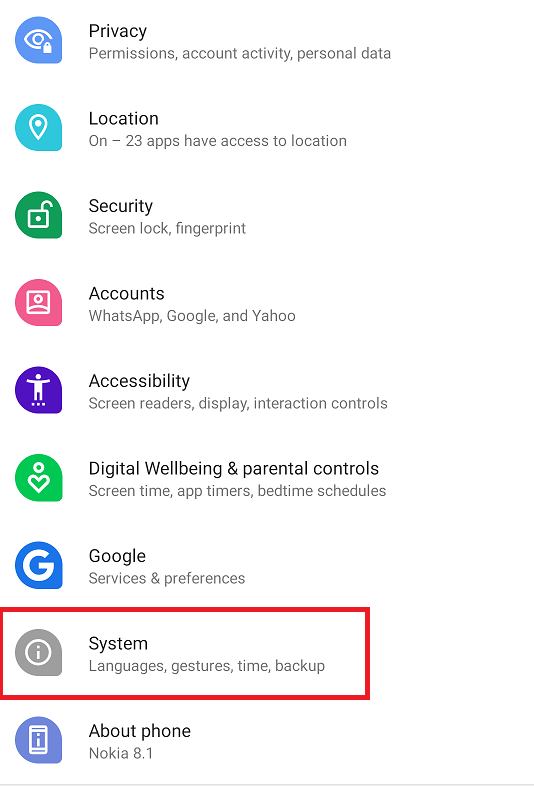 2. Then Tap system and then advanced, you will see the developer options: 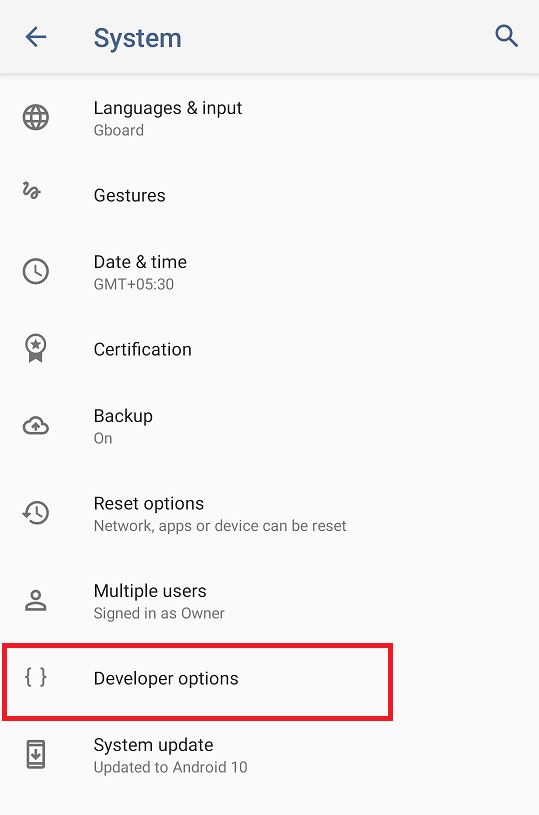 3. Then tap on the developer option and scroll straight down to the bottom. Don't start fiddling with other functions unless sure. You will see 'THEMING' 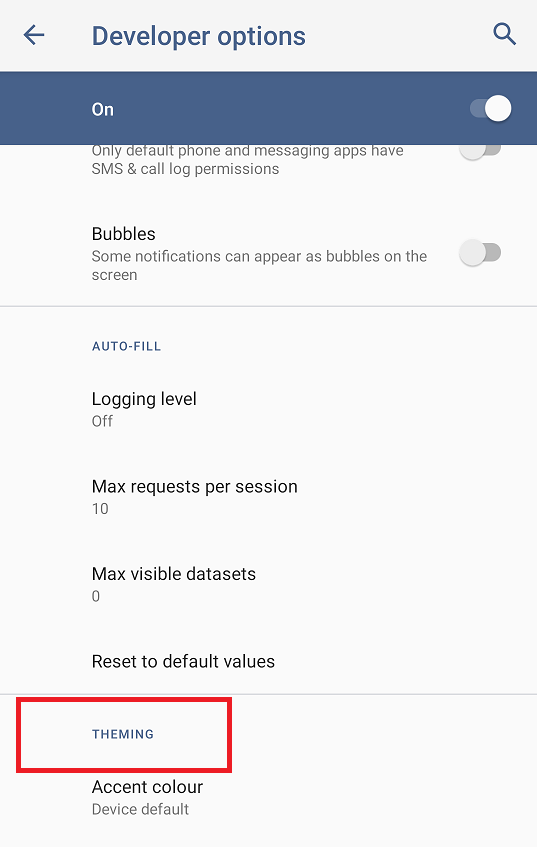 4. Under 'theming', there will be three options for personalization. Accent color, Headline/body font, and third icon shapes. 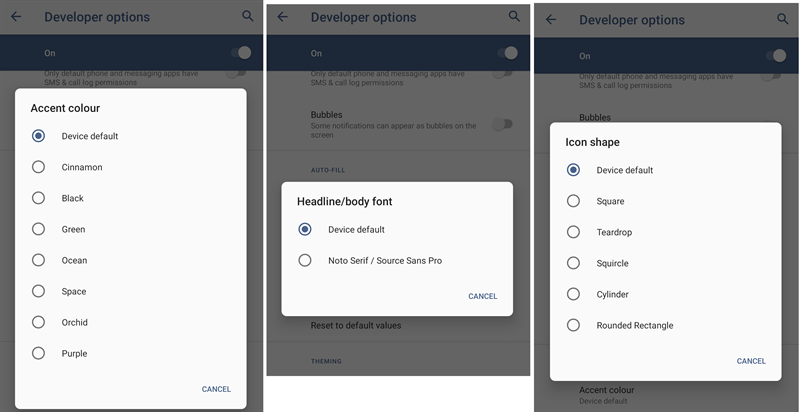 Now to personalize your device you can choose the available accent colours – Cinnamon, Black, Green, Ocean, Space, Orchid, Purple. To change the Headline/font, you can leave it as System default or select Noto Serif / Source Sans Pro. And under Icon shape you can have Square, Teardrop, Squircle, Cylinder, Rounded Rectangle.
Now, these icon shapes can be previewed as under:

You can choose the icon shape you will love to use on your smartphone. My personal favorite is 'Teardrop'.

This functionality saves you from installing additional launcher and personalization apps that not only eat up your phone memory but also slow it down by showing you too many ads at regular intervals. You can have the best of looks for your Android 10 smartphone just by tweaking and utilizing its inbuilt feature.

Android 10 features have made the wait for Android 11 more exciting as a lot more features is expected to be bundled in the Android 11 operating system.