Sudoku is a popular game and therefore there are many different ways to play it. Physically, you can either play it on pen and paper or you could just play it electronically. Playing it electronically offers more convenience as well as more customization. Which just makes playing the game more fun.

A great way to play Sudoku is on your mobile phone, this is because well, it's mobile. Chances are you always have it on you which means you're always able to play it when you have the time. But, it begs the question of how you can play sudoku on a phone. Luckily for you, there are many great ways and all will give you a great experience.

Each will give the core experience while also adding to the game in their own way. Some will only give you the base gameplay if that's what you're looking for while others will offer their own style to the game. Which gives the game more spunk which makes it overall more interesting to play.

A great way to play Sudoku is on Arkadium Games via the web browser. It features multiple different games of Sudoku as well. These different games include Diagonal Sudoku, Daily Sudoku, MathDoku, Penny Dell Sudoku, as well as the original Sudoku. Though it does have multiple variations of the game that doesn't mean that the Sudoku original is not well made.

The original Sudoku provided allows you to play the classic game to give the experience you're looking for. This Sudoku offers four different difficulties ranging from easy to expert. The higher the difficulty the fewer numbers that you begin with. In each game, you are provided with a given amount of numbers and if you place a number, the game will highlight other numbers that it is in direct conflict with.

That is to say that if you place a 1 in a column that already has a 1, then both numbers will be highlighted red. Doing this allows you to focus on the puzzle without having to worry about making silly mistakes like that.

The game has a timer to track how long you've been doing the puzzle. It also offers an undo button, penciling in, and erasing so nothing is permanent. And if you leave and the browser refreshes, you'll have the option to start where you left off. It also offers hints and can even complete the puzzle for you. 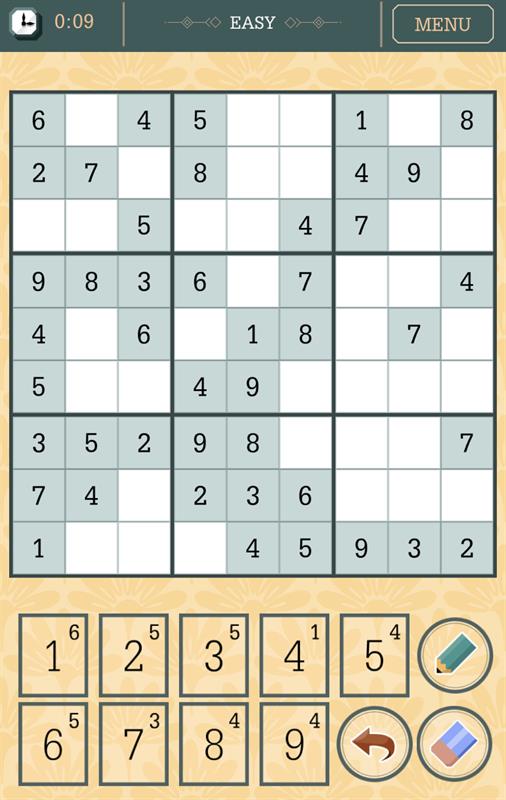 Sudoku.com is also another great way to play Sudoku. This can either be played in the web browser or in the app, both called Sudoku.com. It has an app on both Google Play and the Apple App Store. The app has normal sudoku and offers the same difficulties offered as the previous. It also offers a daily challenge and seasonal adventures.

Seasonal adventures are just many sudoku levels and fit the current holiday or the recently passed one. The app also offers statistics so you can follow your progress the more you play. The website does not do this and gives the base game experience. Like Arkadium, it will also highlight numbers that are in conflict with other numbers.

The color palate is basic but does offer three different ones, light mode, sepia, and dark mode. It also has an option to sync the mode to your phone, if your phone automatically goes into dark mode then so will the app and it's the same with light mode. 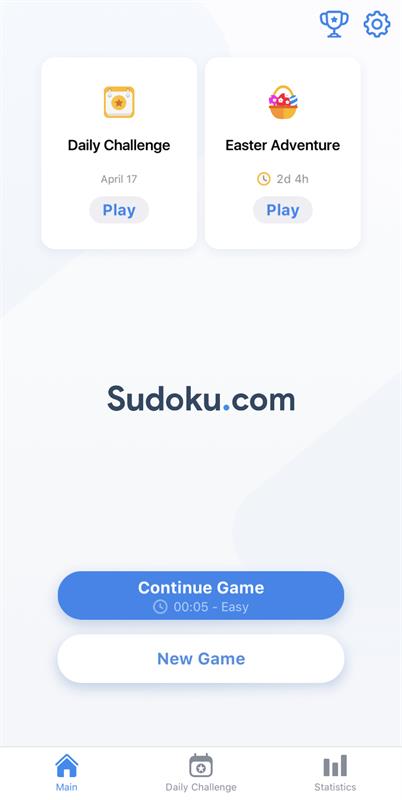 This is another Sudoku app that can be played on both the Google Play Store and the App Store. As for the game goes, it's pretty basic as it gives the standard difficulty modes except "Expert" is replaced with "Extreme". The game also offers competition in which you will face a competitor in real-time. 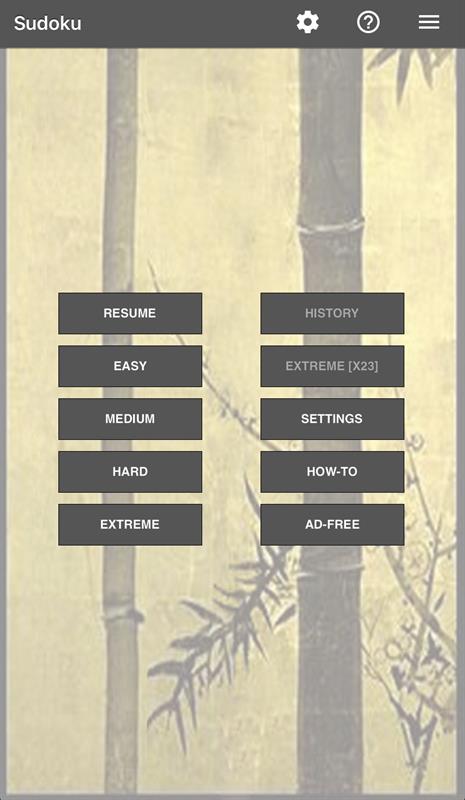 Sudoku World is another app that provides the classic Sudoku experience. As with the last, the difficulty options are standard but "Expert" is replaced by "Master" which will only let you feel cooler when you pass the level. It offers a challenge mode and a multiplayer mode. It also has achievements and leaderboards.

The theme of the game is earthy, or nature; in other words, it has greens, oranges, and soft yellows. One downside is that to access the hard and master difficulties, you will need a specific star amount which is by completing the easier levels. It offers an undo and redo button as well as hints and penciling in. 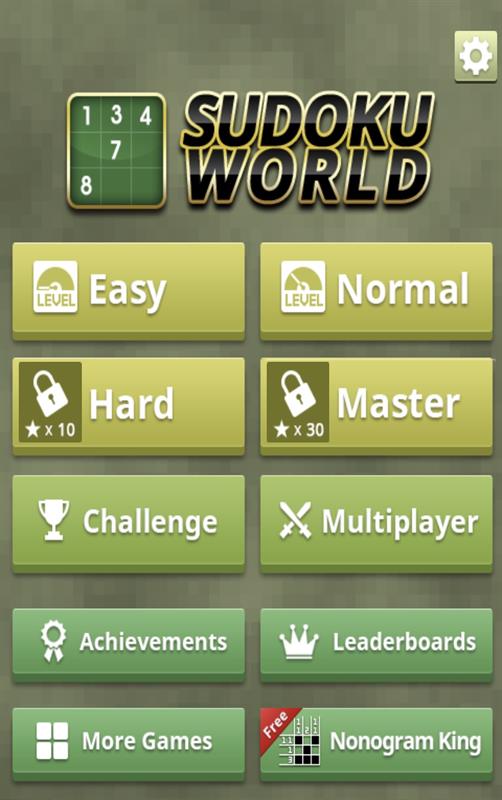 Sudoku by Brainium Studios is another app that provides the classic experience of Sudoku and unlike the others offers 5 difficulty options. The added difficulty is named "Breezy" and offers an experience easier than the easy difficulty.

Similar to the other games, if you place a number, it will highlight the other numbers of the same value in blue. If the number is conflicting then the placed number will be highlighted in red rather than in blue. You can also change the backdrop color with 5 different themes. The colors are green, red, blue, sepia, and purple. You also have the option to change the grid style and the font size. 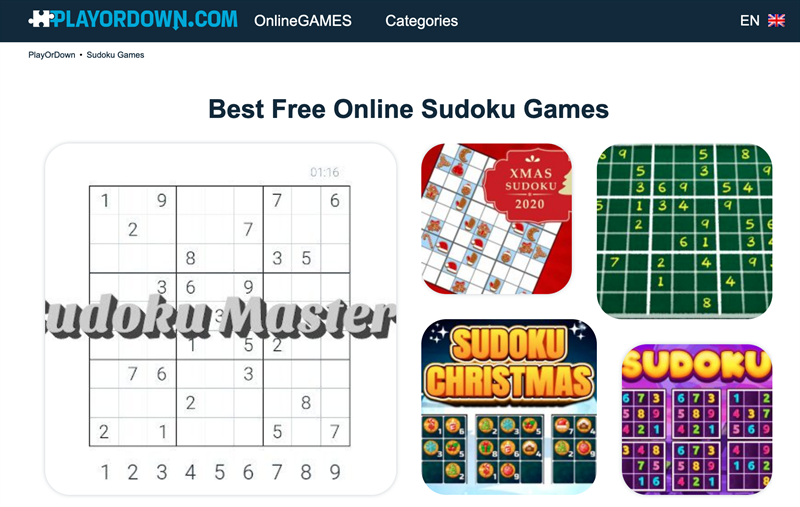 Playordown is another great website to play Sudoku. Sudoku is one of the most popular puzzle online games. The goal is simple, fill in the boxes in the grid, so each column, row, and 3×3 square has the numbers 1-9 appearing one time each.

There are hundreds of thousands of different Sudoku puzzles. Take the daily Sudoku challenge and see if you can correctly complete a new game board every day. When the solution becomes too easy, adjust the settings and play on the more difficult levels.

Sudoku Craze is an excellent ad-free version of Sudoku that you can play on the mobile web without downloading any app. They have six different difficulty levels, including an "insane" mode if you really want a challenge. But if you're a beginner, you can try their "easy" mode which gives you more starting hints. Be sure to play in their full-screen mode for the best experience.

No matter what, you will find entertainment out of Arkadium Games, Sudoku.com, Sudoku by Genina.com, Sudoku World, and Sudoku by Brainum Studios. So rest assured that each option will keep you interested and entertained. Have fun and good luck!