Samsung has launched a new device called Galaxy Fold which can be used both as a smartphone and tablet. As the name suggests, it's foldable. When it is open, it can be used as a tablet and else as a smartphone. The main advantage of owning this device is that we can carry this device in our pockets just like a normal smartphone and get the experience of using both a smartphone and tablet. With the launch of this device, Samsung has set the beginning of a new era and we can call it the foldable smartphones era. There is no doubt that soon many companies are going to follow Samsung's path and will build phones like Galaxy Fold. We have to wait and see how those attempts will go. Let's review Samsung's Galaxy Fold in detail. 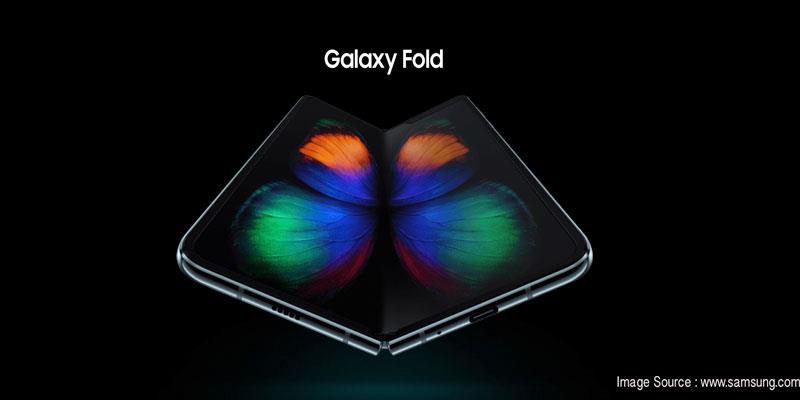 Design-wise it seems like two phones joined together by a hinge. When it's opened we get the experience of a 7.3-inch tablet and when it's shut, a 4.6-inch smartphone with thick bezels surrounding it. Since it's a very small display in the outside having only 4.6 inches, we are less likely to prefer the cover display for longer usage when compared to the main display. Still, the cover display gives us the feel of a phone when it is shut and it's really helpful in attending phone calls, checking time and notifications. I think that's the only point in having that cover display. Besides attending calls, checking notifications and small scale usage, who cares to use that 4.6-inch display when we have a 7.3-inch mega display inside? Talking more about the display, Galaxy Fold comes with a foldable dynamic AMOLED capacitive touch screen with 16 M colors and a pixel density of 362 PPI as the main display and super AMOLED with 399 PPI as the cover display. One speciality of the display that Samsung claims is the higher eye comfort level. The display reduces the intense blue light and thereby produces an eye-friendly display. As far as colors are concerned, it comes in two variants of space silver and cosmos black. On the downside, the hinge looks slightly fragile even though they are saying that about 200,000 robotic folding tests have been done. Another notable thing in the design is about the crease. We can't realize the presence of crease when watching videos and playing games, but when it is viewed from different angles and exposed to direct light we can see it slightly. We can hope that it will improve in the next version. After all, it's just a version 1.0 and hopefully still a lot to come. 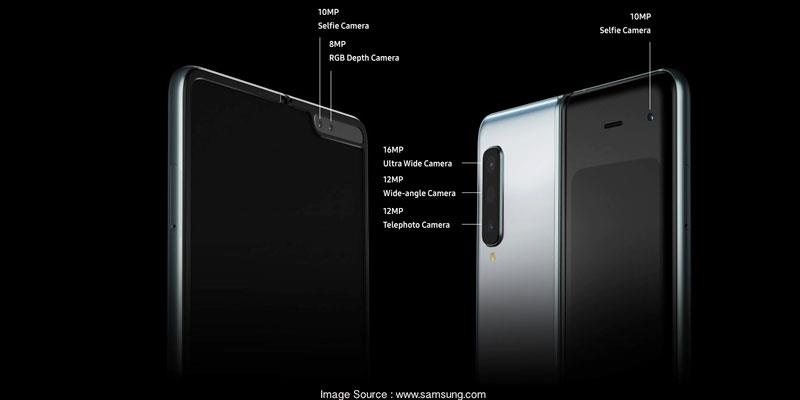 A total of six cameras is what we get in this smartphone. One in the front, three in the back and two in the inside. In the front, there is a 10 MP selfie camera and in the back, a 16 MP ultra-wide, 12 MP wide-angle, 12 MP telephoto camera and in the inside, it got a 10 MP selfie and 8 MP RPG depth camera. In the software front, the notable features are scene optimizer, shot suggestions, flaw detection, and AR emoji. Scene optimizer is a feature in which the smartphone automatically adjusts the camera settings for taking the best possible photograph. We can't say that all the features starting from scene optimizer to AR emoji are only available or first time introduced in Galaxy Fold. These features are available in almost all the high-end smartphones of Samsung like S10 and S10 plus. When it comes to video recording, it can even record 4K ultra HD videos at 60 frames per second. Being the most priced device, Samsung doesn't compromise anything on camera. They have provided the top quality cameras similar to those used in the Galaxy Note 10 Plus and other high-end devices of Samsung. With HDR 10 Plus, the images taken are more dynamic and vibrant. In short, Galaxy Fold has kept the best camera standards when compared to other smartphones and that justifies the price.

When it comes to hardware, Samsung fails to provide the latest chipset. Galaxy Fold sports Snapdragon 855 chipset and Adreno 640 GPU. For such a mammoth price, they should have given the latest Snapdragon 855 Plus chipset instead of Snapdragon 855. In India, Samsung Galaxy Fold costs about RS 164999 and for such a price, we can't make any compromises and it's a disappointment from the side of Samsung. For less than half the price of Galaxy Fold, OnePlus 7T is providing Snapdragon 855 Plus chipset. I guess Samsung should learn from that. As far as the battery is concerned, it comes with 4380 mAh battery if the model is LTE supporting and 4235 mAh if the model is 5G. The speciality of the battery is that it comes in dual mode, meaning the battery is split into two each on the sides and it's non-removable. The smartphone can be charged either by cord or wireless and also it supports wireless power share. We can charge the Galaxy buds which are included with the smartphone by just placing them over the smartphone. Talking about the storage, it comes with 12 GB RAM and 512 GB internal storage. We can call it laptop-like storage minimized into a phone or tablet.

Samsung Galaxy Fold runs on Android 9 operating system. It's another minor disappointment from Samsung's side. For such a huge price, we would expect the latest version of the android. Unfortunately, what they are rolling out through this device is Android 9 instead of Android 10. As I said, it's a minor disappointment. There would be a future update for Android 10, so it's not a big deal. Multitasking is super easy on this device. With such a huge display, we can imagine the level of multitasking that can be performed in this device. One of the great features in this device is the app continuity. Through app continuity, we can resume tasks from the cover display to the main display and vice versa. The only condition is that the app we are using must support this continuity. There are some applications which do not support this feature. When attempting such applications, the application is going to misbehave. In such times, we have to just use the button on the corner to restart it. The term misbehaving means just change in aspect ratio. For instance, while using such applications we get the same aspect ratio of the cover display in the main display. To avoid that we have to just restart the application. When it comes to gaming, the smartphone doesn't overheat and the bigger display gives an awesome experience with no slowing down. Samsung claims that with an advanced vapor chamber and clad metal cooling system, it prevents the smartphone from overheating to a great extent.

The Galaxy Fold is a great device to use. But, there are some minor downsides to this expensive smartphone like unavailability of the latest chipset and Android version. Even though these seem like small drawbacks, the price demands the latest of everything. For such a huge price, we can't make compromises. On the bright side, the portability it offers is great. We are getting experiences of both a smartphone and tablet in a single device and that is a matter of huge applause.However, no matter how durable this hinge is, folding and unfolding a material soon or later with break the material integrity and it will remain to see the lifespan of these smartphones. Also, Samsung is just getting started and who knows what improvements the next version of this device brings? Let's wait and see.

Samsung may be a leader when it comes to high end smartphones. But it lacks dominance in the most important segment in the Indian smartphone market - the sub 15K price band. Cluttered with umpteen number of devices, this has always been the hottest ever segment for the manufacturers. Samsung has recently come up with a new device for the range - the Samsung Galaxy J5. Let us review the one of the coveted affordable devices in this article.

Samsung Galaxy On5 - A new series, A new smartphone

Samsung has been focussing on high end devices so far. With its market share dwindling in the Indian smartphone market, the firm has now begun concentrating on the affordable devices. After Galaxy J5, they are now back with a new series Galaxy On. Two new phones - Galaxy On5 and On7 have been launched recently. Let us make an attempt at analysing the new Samsung Galaxy On5 in the following paragraphs.

Samsung has revealed the new flagships of the year. At the ongoing MWC 2016, the new iterations of the most successful S series - the Galaxy S7 and Galaxy S7 Edge have been launched officially. The speculations doing rounds in the mobile circles have ended. We will make an attempt at understanding the new flagships in a finer detail.

Samsung Galaxy Note 7 is the latest in the Note line up and also Samsung's latest flagship smartphone. I had written a review of the Note 7 before it was released, about some of the amazing facts and cool things which were about to be unveiled. Now that the smartphone is released I am here writing a more profound In-Depth review. Hope the article helps you.