In a world where we can't live more than a few hours away from our smartphones, having a Bluetooth headset makes all the difference to keep you connected even when your smartphone is not in your hand. Though not a heavy user of earphones myself, I do like to have the best of best when I do make use of earphones. After all, it is always better to be able to move freely when listening to music or going to the kitchen for popcorn without stopping the playback. Today, we are going to review the Bluetooth wireless earphones from Riversong - Air X5+. 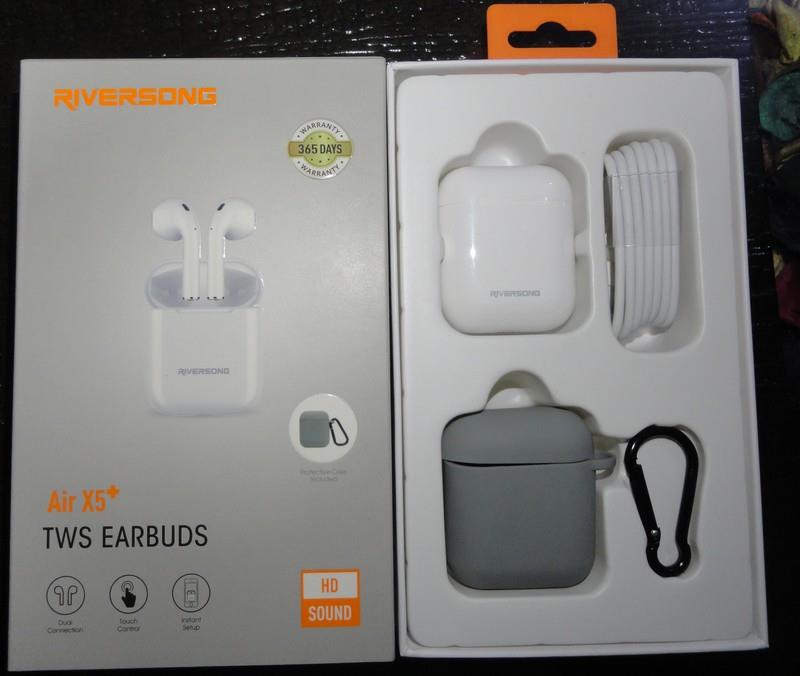 The box that we received contains the earbuds themselves in their charging case along with a protective case, its keychain clip, and a USB to lightning 8 pin cable for charging the rechargeable case. We looked for the replacement earbuds that usually come with earphones but they were not found in the package. On opening the earphone case, the design of the earbuds made it clear that it was to be worn without any rubber covering of any sort. While everyone might not miss them, I personally prefer to have an outer cover on my earphones to make it easier to clean the earbuds after use as well as for a better grip. 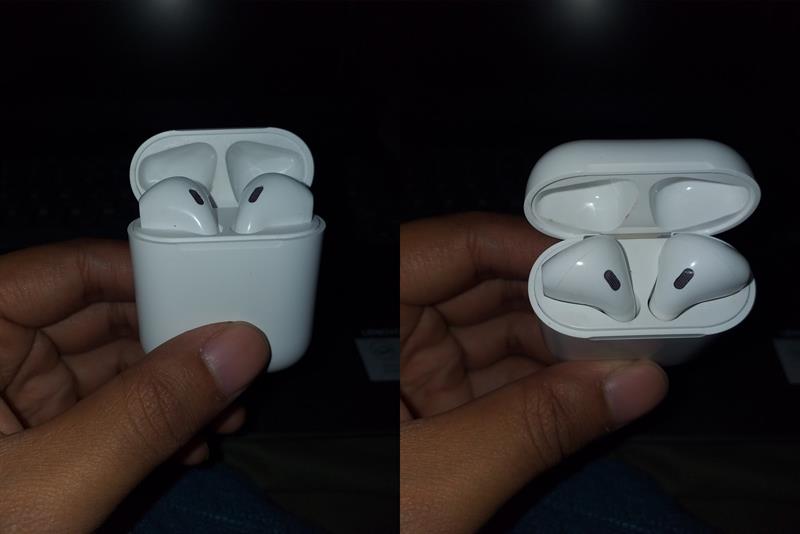 The design on Air X5+ is as minimalist as you can expect from a set of earbuds. They look nothing less than Apple's Airpods. As soon as you take them out of the box, the earbuds go into Bluetooth connecting mode. The back of the Air X5+'s has its microphone and Touch Area. This touch can be used to take actions like picking up a call or disconnecting it. You have to be careful though since a single touch will pick the call and the next one will disconnect it. 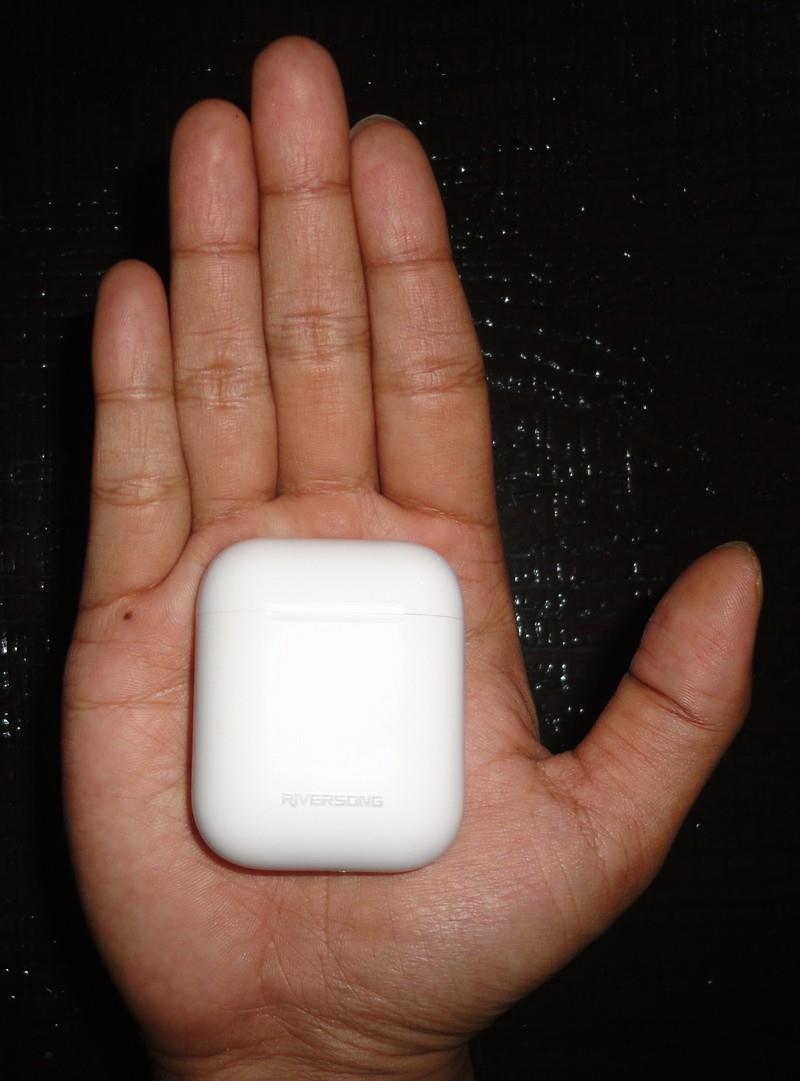 The charging case itself is not smaller than an adult human hand, making it a portable case that can be carried as easily in your pocket as in your bag (though it might get lost in a bag quite easily, being so small!). The case has a battery capacity of 320mAh while the earbuds themselves have a battery of 30mAh. This theoretically means that you will be able to charge your earbuds 10 times after a full discharge. 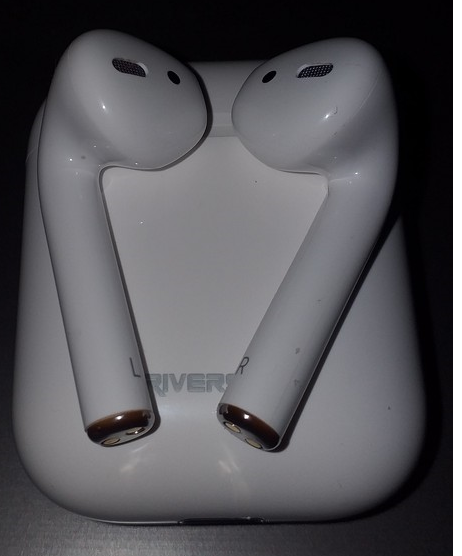 As soon as you connect the earbuds to a device a voice inside the earbuds inform you that the connection is active and similarly you get a message when the connection terminates. It also has a standby time that switches off the earbuds after a certain idle time which is great from the perspective of preserving its battery.

We had a pleasant experience using Air X5+ in a variety of use cases. I watched a complete movie with it, listened to songs and watched some web series as well. The earbuds juice lasted for a little less than 2 hours which is what Air X5+ promises on its product specifications. The audio clarity was great throughout.
The range of these earbuds is 10 meters and there is a possibility that one of your earbuds gets connected to the device while the other stays unpaired. This can happen if one of the earbuds is out of range or is still in the case while the connection is happening. A simple way to fix this is to keep the earbuds back in the case and take them out together for initiating the connection again.

I am being honest when I say that the performance that I got from Air X5+ was not at all what I was expecting. Though I did expect good quality audio, I expected the earphones to falter at some point, especially with them being wireless earphones where the loss of quality in transmission in always an issue for audiophiles like me. However, every test I threw them into, Air X5+ come out with flying colours. Though I missed my personal preference for rubber or silicone-based extra earbuds, this is something that probably I won't even miss after some time using these. I have tested Air X5+ with some of the best-wired headphones as well as some nice wireless ones. Air X5+ outperformed all the wireless earphones that I have and maintained a good lead over the majority of wired earphones I tested it against. At the current pricing of 5,999 INR, these earbuds are not a treat to miss out.

HI
Im loving these earphones, but I need some help with them.
Both are connected through a two individuals bluetooth connections and only one pod turns on at a time.
How do i switch the settings to make both work

my both ear pieces are working separately now it couldn't pair at the same time ! Any help !?

It happens with me too. The best way I have figured out to make sure that both earpieces are connected is to move the headphones in pairing mode before switching ON Bluetooth of your smartphone or any other device. This can be done by the back sensors present on the headphones.