Samsung always brings something special through their Note series compared to their other devices, this time also it is no different. They brought in the best chipset, bigger display, mammoth battery and a total of five cameras. Let's review this latest version of their galaxy note series in detail!

At first look, it seemed a little boxy yet stylish and one of the best look Samsung devices has ever got. I was not very much of a fan of their design in the previous edition of the Note series, especially the rear part. The way the cameras are placed in Note 9 was not that good looking. With Note 10 and Note 10 Plus, they have completely changed their design. It is completely out of the world. The Note 10 plus sports a 6.8 inch dynamic AMOLED capacitive touchscreen with 16M colours and 448 PPI. The device also provides Corning Gorilla Glass 6 protection on the back and front. When it comes to colour, they come in three colour variants such as Aura Glow, Aura White, and Aura Black. The Aura Glow colour seemed a little more attractive to the fingerprints when compared to other colours and will need a case for it if you want to keep it clean. As far as buttons are concerned, all of them are placed on the left side of the smartphone, unlike the previous versions. At the bottom, there is one USB C port for charging and data transfer along with a stylus, speaker and mic. Forgot to mention, the most important design change and the answer to the most important question of all gadget lovers. You would have guessed already what I'm referring to. That is the "headphone jack" and it's gone. It's not like there is not enough space on the bottom or top of the phone to allow for the headphone jack. Simply, they have chosen not to include and Samsung joins the trend set by Apple to avoid headphone jacks. If you need to connect the wired headphones, you have to buy one adaptor separately. They should have provided the phone package with one adaptor to convert the USB C port to 3.5 mm headphone jack. But, no worries. For a person who is buying this expensive device, buying an adaptor wouldn't be that much of a big deal. 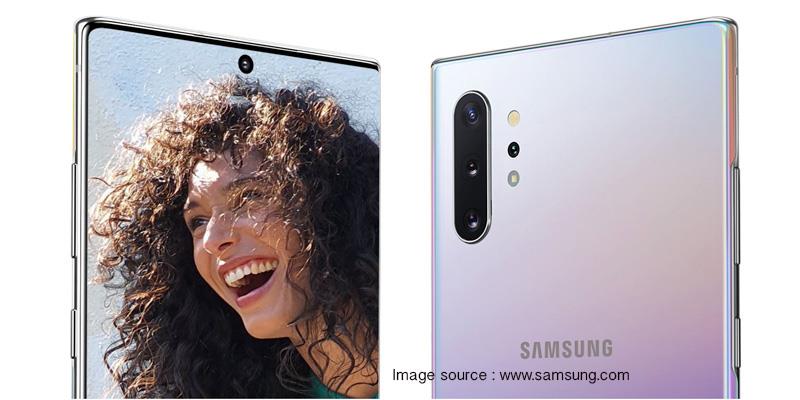 The Samsung Galaxy Note 10 Plus comes with a total of five cameras consisting of 16MP ultra-wide, 12 mp wide-angle, 12 mp telephoto, depth vision, and 10 mp selfie camera. Similar to the Note 10 plus, the Note 10 also sports the same camera configuration except for the depth vision camera. The thing which stands out in the camera section of both Note 10 and Note 10 Plus is their new feature which enables you to capture the sound you want while recording the video. For clarity, if you want to get the sound of a distant person talking, all you need to do is zoom in and there it is the voice of the person that you zoomed in. In the same way, you can zoom out and reduce the voice of that person talking. When it comes to video recording, it can record 4K videos with great stabilization and quality. Another new feature, they have included in the camera software is the AR Doodles. With this, we can draw using the camera interface and what we draw stays on the faces or objects even after moving the camera. For instance, drawing the bunny features on our faces in videos using the camera interface and those bunny features stays there even after moving the camera at different angles. Sounds fun, right? But, how often will we use such a feature? Maybe the first day of buying the phone or the second. Still, it's a nice one to use, especially when we get bored.

The word "plus" in the name Note Plus matters, when it comes to battery. The Note 10 plus offers a mammoth 4300 mAh battery, the greatest in the Note series ever and the Note 10 provides 3500 mAh only. Hence, the difference in the name means something. But, that doesn't mean it's just the battery that has got Note 10 Plus upper hand over the Note 10. It's the display, storage, and an additional camera. In addition to the great battery capacity, it also supports reverse charging. If you need to charge wireless headphones or a watch, all you need to do is place them above the device and enable power share. Both of the new additions in the Note series supports charging up to 45W. Though it supports up to 45W, they are shipping only with 25W charger. It would have been great if they shipped 45W charger instead of this 25W charger. For a price of about 79,999 rupees, it's not bad to think like that

When it comes to hardware, the Note 10 Plus offers high-end specifications. Starting from the processor, RAM to the storage, everything is top class. The Note 10 plus sports Snapdragon 855 processor or Exynos 9825 processor, both are very good processors. Though they are providing two different processor versions, we can't select them according to our wish. It depends on the place, where you are buying it from. For instance, if you want to buy it from Europe, you will be getting the Exynos version and if you are buying it from the United States of America, then you will be getting the snapdragon 855 version. In addition to the great processors, they provide laptop-like storage. By laptop like storage, I mean storage expandable up to 1 TB in addition to the 512 GB or 256 GB internal storage. As the RAM is concerned, it comes with 12 GB which is same for both 256 and 512 GB variants. In short, it's like a small computer.

The Note 10 Plus comes in two different versions such as one with a Snapdragon 855 processor and the other with Exynos 9825 processor. Performance-wise, the Snapdragon 855 processor seems better than the Exynos 9825 processor. With processors like Snapdragon 855 or Exynos 9825 and 12 GB RAM, you can expect the kind of performance they offer. It's super fast. Both Note 10 and Note 10 Plus run on One UI on top of Android 9.0(pie). The one thing that anyone will like about the software of this smartphone is the availability of a feature called Dex. Using this, we can operate the phone in a widescreen monitor or laptop and all you need to do is plug the device into your PC. Before connecting the smartphone to start using Dex, just make sure that Dex is installed in your PC. It can be downloaded from the official website of Samsung and it is available in both Windows and Mac. The other notable things in the software front are regarding using stylus and multitasking. With a stylus, we can convert our handwriting to text and we can find those texts in the Note app. Other things that we can do with the stylus is controlling the camera using gestures and writing even when the screen is off. When it comes to multitasking, it works lag-free and we can work in it using split-screen and multiwindow at ease.

Note 10 plus is worth every penny and it provides a great value for the price. It's undoubtedly the most stylish smartphone at present and under the hood too, it's not less than any of the other premium smartphones. With a battery capacity of 4300 mAh, snapdragon 855 or Exynos 9825 processor, expandable storage up to 1TB in addition to the 256GB or 512 GB internal storage and an excellent camera makes it stand out in the premium smartphone arena.