Huawei is a Chinese consumer electronics manufacturer that also manufactures smartphones. The company has released several iconic flagship devices like the Huawei Mate 20, Huawei Mate X foldable smartphone, Huawei P20 Pro, etc. Now the Chinese manufacturer is tightening its grip on the smartphone market by releasing the all new Huawei P30 Pro - the successor to the P20 series. Some call it the pixel camera killer.

But does it really go the extra mile to kill the pixel's camera department?

Speaking of which, the Huawei P30 Pro is the best balance of camera and software optimization I have ever seen on a smartphone to this day. 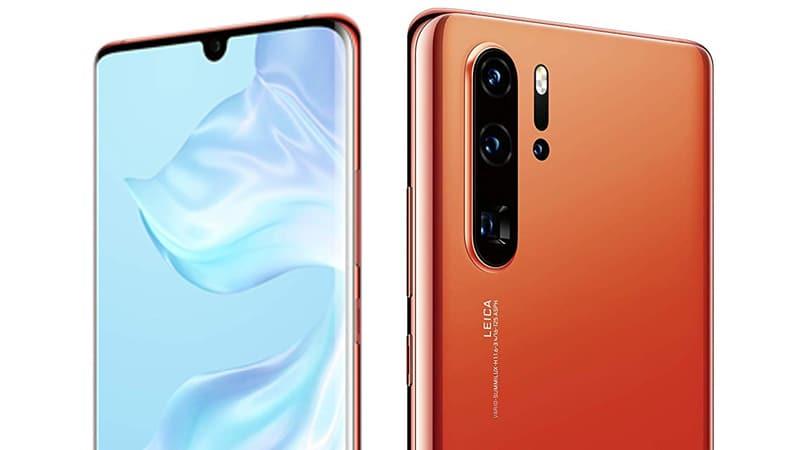 So without further ado, let's dig in :

What's in the box


The 2019 smartphone market is all about design choices. Manufacturers are constantly experimenting with new colors and fresh materials etc. to make their phone stand out from the rest. Phones that make your eyes pop out, ones that will make you buy it at that right moment.

If you've already used the Mate 20, you might not see a major difference in the feel and appearance of the device. Nevertheless, the P30 pro comes with a unique feel to it and it has the famous dew drop notch. This kind of notch is much more refined and less intrusive than the one we see on Pixel and on the iPhones.

But this comes with a slight disadvantage. The Huawei P30 Pro features only a single camera(more on this below) and has no secure 3D face unlocking or infrared sensors on board.

The P30 Pro comes in 3 different color variants: Amber Sunrise, Breathing crystal, Aurora(my personal favorite) and other standard black and white models. The smartphone features a glass-sandwich design, prominent on most flagships these days. Both the front and back glass is made toughened glass (Huawei still fails to tell the name of the supplier) to offer great protection from accidental falls.

The device doesn't come with a 3.5 mm headphone jack. Although the P30 comes with a headphone jack. It seems that the 3.5mm port is a no go route for flagship devices these days. There is also the absence of the speaker grill on top of the device. Huawei like other manufacturers like Xiaomi and Vivo has decided to place the earpiece speaker under the display.

The screen vibrates to deliver sound waves and during my personal tests found it is pretty similar to the traditional earpiece we find on older smartphones. This works on an "electromagnetic levitation technology" to deliver sound to the user.

Like most premium range smartphones these days, the Huawei P30 Pro comes with an under the display optic fingerprint scanner and it is fairly accurate in my opinion as long you press it with some force and for 1-2 secs.

On the back, the device has a Huawei branded logo at the lower left side. There is a slight camera bump which becomes prominent the moment you place it on a table top. Yes, the device wobbles a lot. However, many smartphones have this issue including the Mi 9 from Xiaomi. There is also a USB Type-C port and hybrid sim slot at the bottom end. 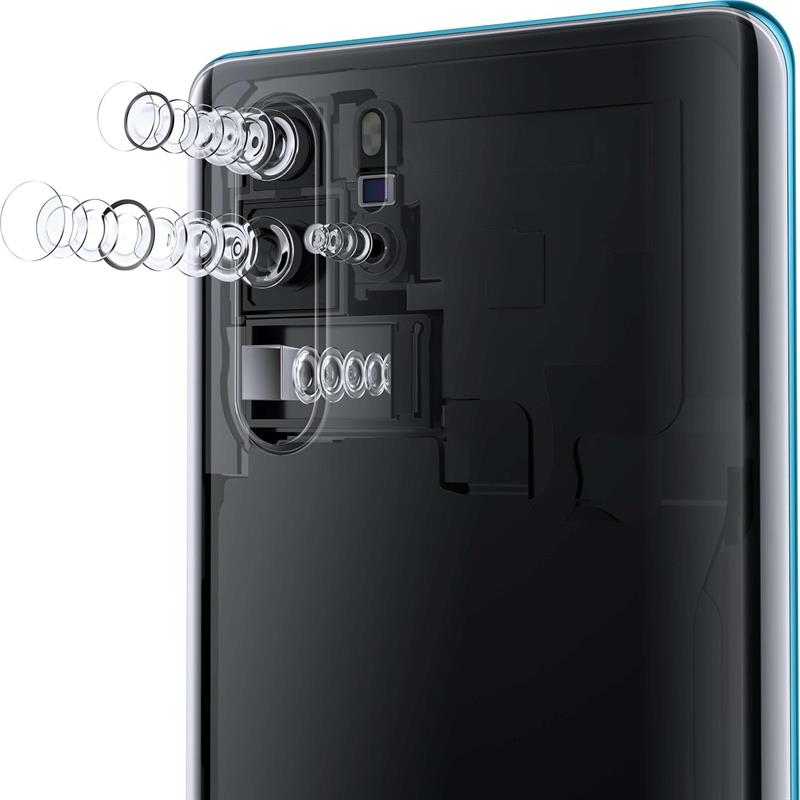 The Huawei P30 pro comes with a 6.4-inch OLED Panel, common in premium range phones. As I have mentioned earlier in the design section of this review, the P30 Pro comes with an optical in-display fingerprint scanner.

The display comes with 1080x2340 resolution which is a bit lower than the ones we see on Samsung devices whose top-tier flagships comes with QHD resolution. The colors have good sharpness and contrast to it. The display feels vibrant and easily visible during sunny hours The display also supports ALWAYS ON technology. The display brightness on auto reached 605 nits whereas the maximum possible brightness is limited to 507 nits during manual adjustment.

The Huawei P30 pro comes with Leica Powered Quad Camera setup. There is a group of three cameras on the left side. The top one is 20MP which has an ultra-wide f/2.2 aperture, the next one is the main 40MP RYYB "SuperSpectrum" sensor with f/1.6 aperture and the last one is 8MP f/3.3 periscope OIS lens for 5x optical zoom fitted inside a square. The LED flash and the ToF (Time of flight) sensor has been placed under the glass. 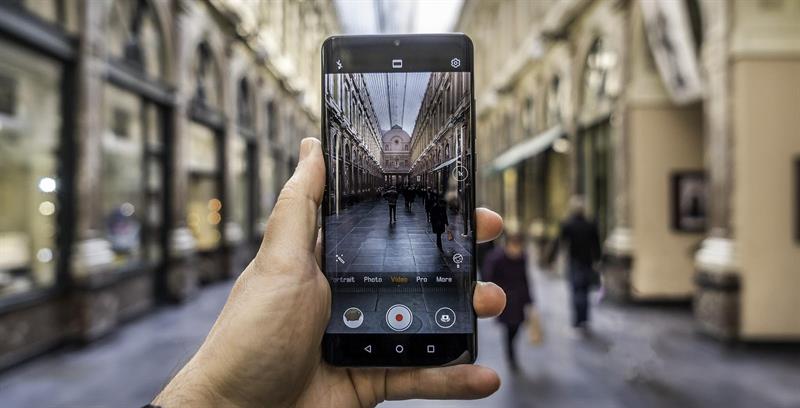 The ToF sensor will also allow the user to use AR based applications and play games which are motion controlled. However, this is only a new trend and very few Android games support this feature as of now.

Another important and notable feature of this smartphone is its night sight :

We all know that Google's image processing technology can't be compared to Huawei's software. It's more like comparing apples to oranges. The Pixels camera is simply the all-rounder when it comes to the camera. It's not rocket science. But we're talking abt RAW power. The Huawei P30 Pro simply has more cameras in its favor to capture an insane amount of photographic information. The latest Pixel series simply lacks this.

In photography, more cameras mean more details and more details means better shots. Shots that make you want to post on social media. But this doesn't mean that having 3, 4, 5 or even 6 cameras will make a huge difference. The software that supports it should also be highly optimized to process the images and add details to the shots.

Both the software and the camera onboard go hand in hand with photography. The Huawei P30 pro analyzes different parts of the images and automatically adjusts the shutter speed to ensure all objects are well lighted.

I have tested the night mode of Huawei P30 Pro in extreme low light conditions along with the Pixel 3XL. During my tests, the P30 Pro consistently took better shots compared to the Pixel 3 XL and the processing time was also much lesser than the Pixel 3 XL. This is a great feat since smartphones with more cameras tend to take some time processing. Though the P30 Pro took better shots than the Google Pixel 3 XL, I still do think that the there's nothing close to the algorithmic magic of the Pixel Google camera.

As of now, P30 Pro is the best camera you can get in a smartphone.

The Huawei P30 Pro comes with its own version of Android 9.0 Pie which is Emui 9.1, the new version released when the smartphone was launched. This new version of EMUI brings a host of cool new features even though there is only a small increase in version number.

Huawei has introduced a new filesystem called EROFS, which promised to improve random read speeds by about 20%. Another notable feature of the EMUI 9.1 is the new GPU Turbo 3.0. With this, games on EMUI 9.1 will be 10-15% faster than the previous version of the OS.

Besides the above-mentioned features, EMUI 9.1 also comes with AR Measure(which works with the help of data from the ToF sensor), Vlogging tools, OneHOP, Workout Planner, etc.

The device comes in 128/256/512 GB variants and has a nano-memory card slot for additional storage. The nano SD card slot can handle 256GB of storage, so advanced users can effectively get 1TB of storage using a top-end Huawei P30 PRO and a 256GB SD card. The base model of the device comes with 6GB of RAM, while the top-notch model has 8GB of RAM.

So now comes the final question: Is the Huawei P30 Pro the perfect flagship smartphone of 2019? Well, for me at least, for now, it's a definite YES. I very much fell in love with this device the moment I set my eyes on them. I mean who wouldn't with all that shiny glass and breathtaking design choices.

The P30 Pro has got several new tricks up its sleeve especially the camera. The camera is simply unstoppable according to me. In some scenarios, it even kills the Pixel 3 XL. But still, I have an ever so slight liking to the Google cam as it produced consistent results, and going by the trends, the upcoming Google Pixel 4 will defeat P30 pro with its software magic.