Smartphones are now an inseparable part of our life. Apart from all that it can do, it is also used the most for its basic functions like making a simple phone call. But, at times we need to record the calls for future reference too and most smartphones have apps for that. If we talk about Android, there are lots of them in the Google Play store and choosing the best one among so many such apps can be confusing. We will be listing down some of the best call recorder apps on Android available in 2019 and some of its features.

Do we need Call Recorder Apps on Android?

Many people debate about whether such apps are actually required on an Android phone. Some even go to the extent of claiming that these apps breaches privacy and are unethical in its usage. But, we would like to say that all these arguments do not make sense unless we justify the real purpose of using it. Every country has its own rules and regulation on the use of call recording apps on a smartphone. These apps can be pretty useful when we are out of our house or workplace and need to note down some important notes over a phone call. Having an app record the conversation can be very convenient than to note down something on the road or while commuting. Logically speaking, privacy should not be an issue as it records the users own conversation with a person only and does not spy on others.

So, let us have a look at what we have under best android call recorder apps 2019.

First, you may ask, why Android? Because it is one of the most widely used smartphone OS and hence it's obvious to choose it for reference. We will discuss similar apps in other platforms too but in this article, we will be focussing on Android compatible call recorder apps only.

What features are important for Android Call Recorders?

Some essential features to look for while exploring different call recorder apps on Android are listed down as follows for your reference:

The first one that impressed us a lot is the Android Cube Call Recorder ACR developed by Catalina Group. It is available under Tool category and rated '3+ (Contains Digital Purchases)'. It is a free call recorder app on Android but has certain in-app purchase options too for extra features. 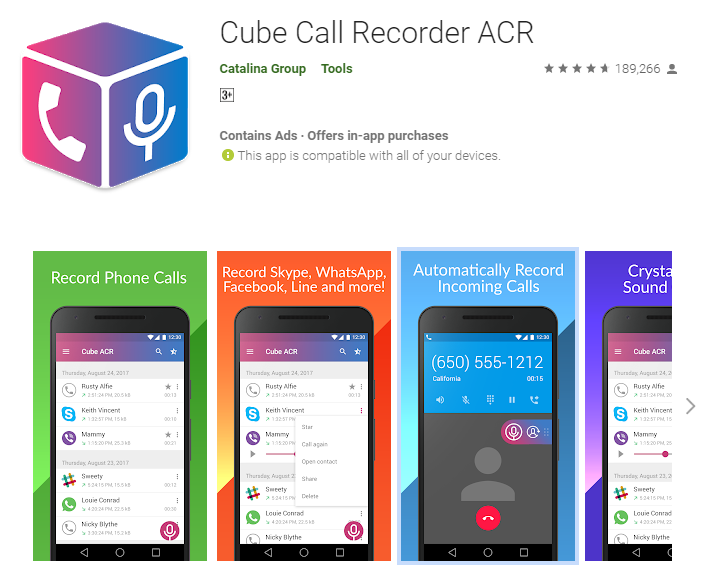 The best thing we liked about this app is that it not only records the incoming and outgoing calls but also VoIP conversations. It is very useful because, after the availability of JIO internet and change in prices of data packs, VoIP calls are utilized by many. Further, only a few apps would support recording calls made on apps through the internet. And among these apps, Cube Call Recorder ACR app excels much better. It is a free app that can record phone calls, skype & Whatsapp conversations, hangout, facebook, and many others. But on the downside, a trending app like Jio4GVoice is not yet supported.

If you go by our experience, this app is one of the few call recorders on Android that records both ways. In most apps, there are many complains wherein only the first person's voice is reported to be audible on playback of the record. But this is not the case with Cube Call Recorder ACR. It records & playback the audio record with crystal clear sound quality all the time. Other features include cloud backup, pin lock, save to SD card, Shake-to-mark, and compatibility with tablets.

This one is another great Android app that can help you record phone calls with ease and in great quality. This app is developed by Appliqato and rated '3+ (i..e Digital Purchase)' just like the previous one. It is available on Google Play Store and is ranked #6 in the Top Free apps category. This 5.2 MB app can be downloaded directly from the Play Store. It is quite popular with lots of positive reviews. 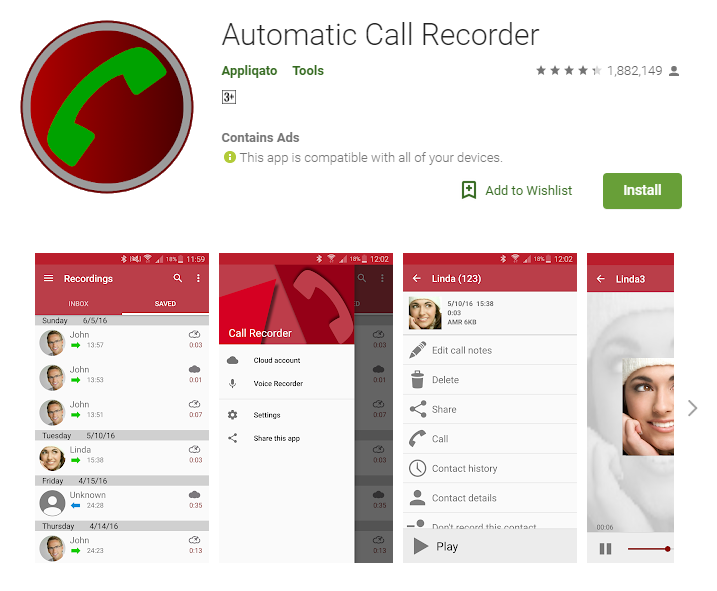 There are different modes supported in this automatic call recording app on Android. You can easily set it for recording calls from a specific list of callers or options to record calls from unknown callers only. It supports cloud storage and a paid feature also lets you save calls from particular contacts automatically.

Cloud storage is powered by Google Drive™ and Dropbox and it will work seamlessly on smartphones with Android versions 3.0 and above.

A little downside about this app is that the free version of it also comes with ads that may be annoying for most people.

This app that is reviewed and rated 4.5 stars by more than 557K users on Play Store is another popular call recording app available for Android users. It has the much-required auto record mode followed by a good record management feature. Using this app, both incoming and outgoing calls along with telephonic conversations can be easily recorded. Another significant feature of this app is its whitelist and blacklist feature. Auto call record feature though convenient puts a lot of stress on storage management. Selective contacts recording on auto mode solves the issue by saving a lot of space on the device. 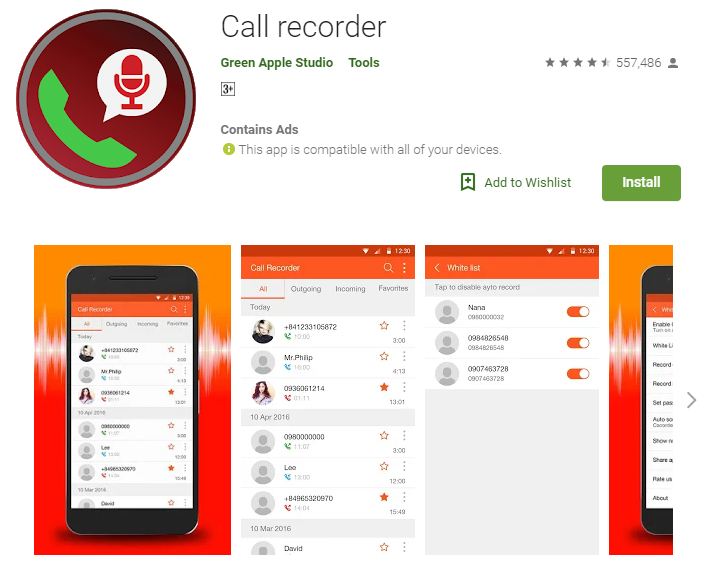 Other than the above, its support for password protection solves all privacy concerns. It also offers many recording formats and different audio sources such as mic, voice call, and camcorder.

Our experience with the app was average. At times we found the audio quality of the recorded phone call on the lower side. Compared to other apps, the Android Call recorder by Green Apple Studio stands as a good alternative that works just fine on most smartphones.

Another popular Android app in this category is the Call Recorder from CRYOK SIA based in Latvia. It is also known as Blackbox™ and claimed to be a reliable tool by the developer. It has many features but lacks the capability to record VoIP calls as on the date of writing this article. 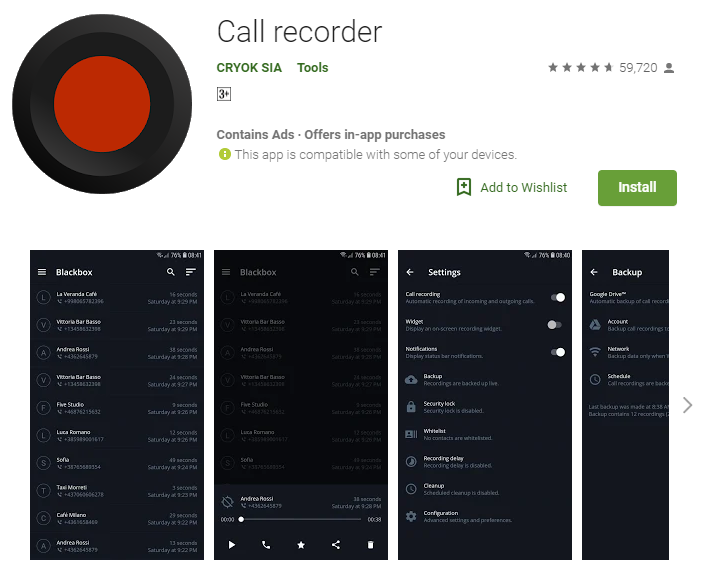 It offers a lot of features such as protection from unauthorized access using app lock. It can also obfuscate recordings from other apps. Record management feature is quite helpful in managing old record files. It supports auto cleanup of old recordings as per a defined schedule.

Most importantly, this Android Call recorder app from Cryok Sia (also known as Blackbox) supports dual SIM. As such, no matter which SIM you make or receive a call, it still records it. Another noteworthy feature is its on-screen widget that allows manual recording of phone calls.

This app by SMSROBOT LTD (Auto Call Recorder, Period Tracker) Productivity is the last item in our list of best call recorders for Android. Its two-way phone call recording can record calls in MP3 and WAV audio formats. It is compatible with most phones including the Samsung Galaxy series and other popular brands. The recording is done in four different quality levels as per preference. 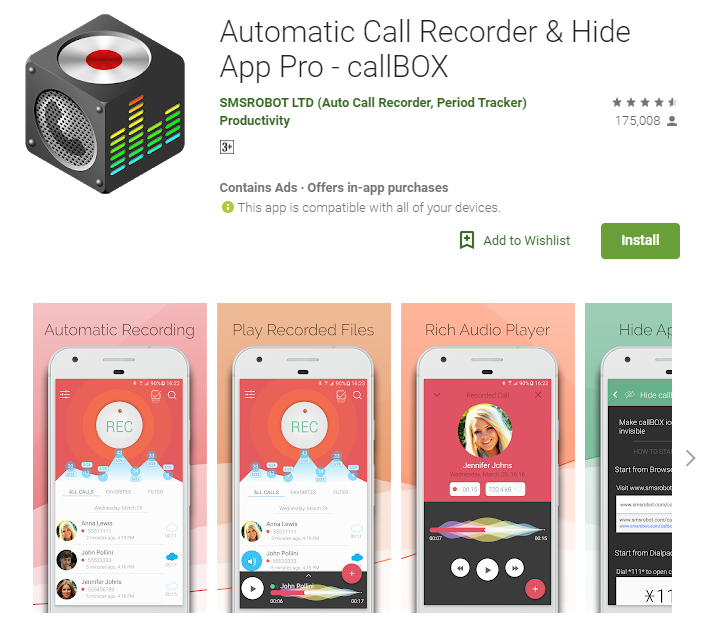 As you can see on the image above, it has good user reviews on Google Play Store. The UI is quite good and eye-catchy and offers convenient access to its important features.

As of now, all the pro options are offered for free. These premium features which are common in most apps in this category include hide app icon, cloud sync and shake to record. Other than that it offers many other features that make using this call recording Android app quite useful.

We have used many of these apps on different phones to test their effectiveness. No app was perfect and each offered different features and convenience. To make good use of any of this app, we would suggest you to first set your priorities on which feature is important from your perspective. It is only after deciding on this that the selection of a good android automatic call recorder should be made. At times, these apps come very handy. The usage of these types of apps may not be permissible in some regions.

But otherwise, these are some great tools that can be very helpful to you in a lot of different ways.

These are our recommendation of best call recording apps for Android that can be used during 2019. It is all based on real user reviews on the Google Play Store itself and our limited experience of using it on a few phones. We would like to know from our readers about their experience in using any of the above apps or even of those not listed here. Do drop your feedback by commenting below.

Great list of call recording apps. Automatic Call Recorder is my personal favourite which I have been using for quite some time now. Will explore the other options mentioned in this post. Thanks for sharing!