Smart Switch is Samsung's proprietary app that can back up data from one device to another. It offers seamless transfer of photo & essential data from old devices to a Galaxy S and the Note series. We all have used Google's cloud backup service that comes handy whenever we get a new phone. Using Google's backup app, we can backup important data like contacts, media files etc.

We can then restore these data in any other phone by importing it from the cloud.

But doing the same on a Galaxy device had never been worry free and so easy using the Smart Switch app. Even in case the old phone containing the data is not a Galaxy phone, we can still transfer it via USB, Wi-Fi or a computer. We can transfer the data all in a flash without having to worry about any transfer issues. Smart Switch by Samsung is available on some selected smartphones as listed below:

In other words, devices newer than the Galaxy S2 in the Galaxy, Note or Tab series are compatible. For Android, one can use the Samsung Smart Switch Mobile app while the same is also available in Windows & Mac. Thus, it can support only a few flagship phones as of now and other phones still needs to use Google's service. Other options such as Dropbox are also there and used by many. 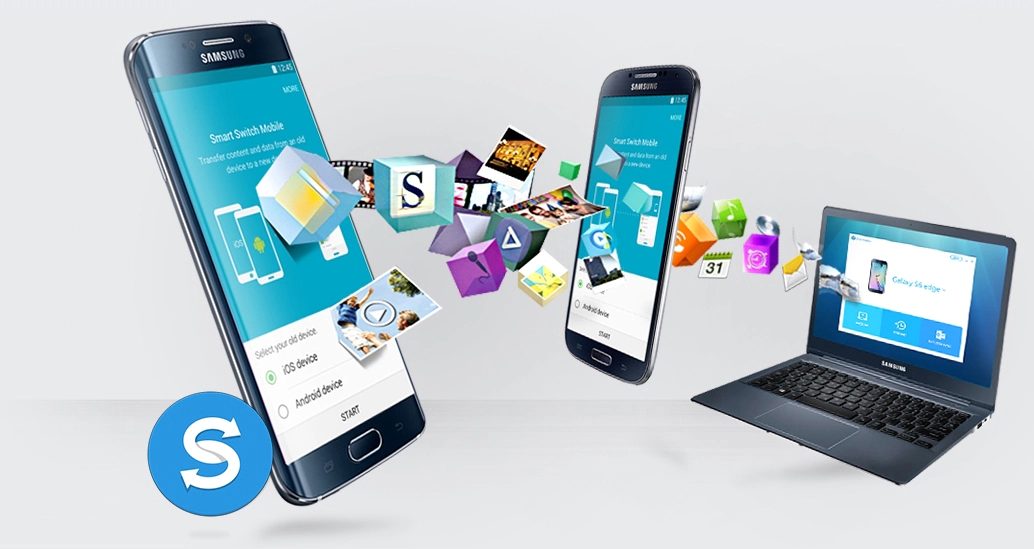 Smart Switch on Windows is a great way to transfer contacts, photos etc. as we move between phones. It is available for download online and one can install it on their Windows or Mac without much of a hassle. Once installed, we need to configure it before its first use. We have to connect the phone to the computer using a USB cable and run the application which will auto detect it. For it to work, we have to keep the Transfer option active on USB mode selection.

Once connected, the UI is simple and straight forward to follow. We can perform the backup and restore function of the app by choosing relevant options. It takes only a few minutes to backup and restore files and hence a good option for Galaxy phone owners.

On Windows, the app will work on Windows XP (SP3), Vista, 7, 8 with least 1GB RAM. On Mac, it will work with Mac OS X 10.5 or later with the same memory requirement as that with Windows. The computer version also offers the feature to update the phone's software. It is better than the OTA updates we generally receive on our phone and update will complete faster.

Further, data synchronization is quite useful. It ensures that contacts & calendar schedule will be in sync and manageable no matter where we are.

Besides the desktop app, there is also one for Android that we can use to transfer files between two phones. Samsung Smart Switch Mobile, the one meant for Android, is downloadable from Google Play Store. It supports wireless transfers of data between devices via Wifi on Android 4.0 or higher. Data transfer between Galaxy devices is seamless with 1-click easy connection.

We have used Google's cloud service for ages and it was seamless too except for a few trouble now and then. But it never offered similar flexibility to backup & restore data between devices. So, the Smart Switch app is definitely a recommended one from our side and we would love using it again and again.

So, if you own a Galaxy or Note series phone then you must try it once. We would love to read your experience with this app in the comment section below.