Most of the computer users are familiar with the term USB or Universal Serial Bus. USB ports are essential in most devices including computers & smartphones for data transfer. Apart from that, there are other utilities of USB as well. USB 3.0 being the third major version of the Universal Serial Bus is 10x faster than USB 2.0. The latest version is the USB 3.2 that released on September 2017 and supports USB-C with data speed up to 10 & 20 Gbit/s. But, with the advancing technology USB is all set to get its fourth iteration in the form of USB 4.0. This new version will follow the Thunderbolt 3 protocol by Intel as per the USB Promoter Group.

Thunderbolt a.k.a. Light Peak is a hardware interface developed by Intel in association with Apple. In simple terms, Thunderbolt offers high-speed transfer of data and connectivity interface. This can be a connection of different peripherals and can also transfer HD Video. Thunderbolt can also deliver power output to all connected peripherals up to 100W. 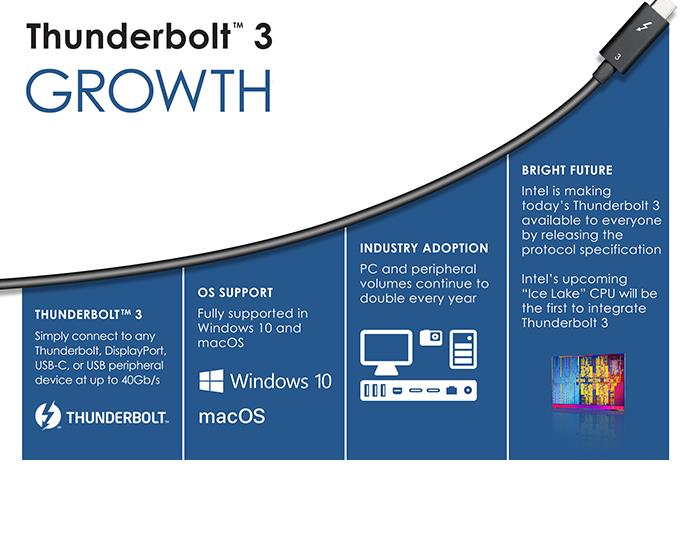 If speed does matter, we can say that Thunderbolt is very fast with 10Gbps data transfer speed. Moreover, it is bi-directional and can receive and transfer data at the same time. When compared to USB 3.0, the Thunderbolt is blazing fast and even faster than eSATA on Windows. This gives a fair idea of how this peripheral-connection technology can improve performance. Moreover, it supports audio & video, data & power all through a single cable. Thus, a cable that we use to power up a peripheral is also usable for data transfer thereby reducing clutter.

For devices having more than one Thunderbolt ports, it is possible to connect six devices. But, this type of connection will be possible only in daisy-chaining fashion. It does not affect performance on many connections as such but it will share the total throughput. Hence, there might be a little variation though in the performance level on a case to case basis.

USB 4.0 and Thunderbolt - The Convergence

Report says, Intel has shared its Thunderbolt 3 protocol spec to the USB Promoter Group. As such, convergence is imminent and the result will be spellbound. We have used USB 3.0 & 3.1 version before and its performance has impressed us, admit it or not. But the thirst for more never ends for a human mind and expectation from USB 4.0 is no exception. So, what can we expect? USB 4.0 alongside Thunderbolt will make it possible to charge at 100W. And what more, the data transfer speed may extend up to 40 Gbps. This speed can support more than a single 4K outputs over a single channel.

Yet, the biggest concern still lies in whether USB 4.0 will be backward compatible. It should be, why not? There will be support for those older versions of USB such as 1.x, 2.x, and 3.x. But the data speed will, of course, be under the limitation of its actual potential. For those who had used a MacBook Pro needs no special explanation of what to expect. But for others who have not used Thunderbolt, USB 4.0 will blow out your mind with its amazing capabilities.

But, one deterrent factor to all the goodness that we expect from USB 4.0 is its pricing factor. Thunderbolt has been a costly pursuit and if USB 4.0 also follows the same track, it might not be as popular as older USBs. One more thing that is noteworthy with regards to the new technology is that of its adaptation. How many Thunderbolt-based peripherals did we actually come across so far? Or to put it in a different way, is there any that we can actually mention? Many manufacturers have shared their prototypes and projects involving Thunderbolt peripherals. But we have seen none so far making its way to the market.

Hence, an early adaptation of manufacturers to the USB 4.0 specs will take some time of course. The wait will anyways be worthwhile. And only after the final spec is out, branding & marketing guidelines will then follow. Until then, we won't be seeing any USB4 products in the market.

When will be the USB 4.0 released?

Not any time soon. USB 4.0 is still under the early phase of development and a final spec is yet to release. No USB4 product will as such be available in the market for a long time. Even USB 3.2 has seen a lot of delay in its rollout and its adaptation may likely increase towards later this year. Under such circumstances, USB 4.0 is a long way for it to be available in its full potential.

At least for now, USB 3.2 with 20Gbps data transfer speed is the deal we need to focus right now.

The news is good. USB 4.0 is coming next and with an amazing promise. Data transfer speed up to 40 Gbps is extraordinary and will revolutionize connectivity. At least, we are optimistic that one day USB 4.0 connected peripherals will be available at large. And not to forget the blazing fast data speed transfer it promises to offer.

For instance, external hard disks and SSD storage can enjoy the benefit of its high speed. We will have fewer clutters of cables for connecting many devices and that's a relief. One cable, one port, and many features. This is what USB 4.0 with Thunderbolt signifies. Even today when 4K or FHD videos at 1080p have gained popularity, high-speed transfer speed can do wonders. It is only a matter of time that all the speculation around USB 4.0 and its real potential steps into the real world. Until then, we've options in USB that although not equal to Thunderbolt, are still fast enough.

So, what do you think about the upcoming USB 4.0 technology and its reported features? What are your expectations & opinions on this new version of USB? Powered with Thunderbolt 3 protocol spec, we hope for faster speed like never before.