Robotic Vacuum Cleaners are slowly getting more popular worldwide as it is aggressively being promoted by product manufactures highlighting boldly its salient features and trying to make its point as to how it can ease a humans life with its fully automated floor cleaning capabilities.

To find out its worth, we have picked the Xiaomi Mi Robot Vacuum and tried to review the same and find out whether it justifies spending thousands of our hard earned money to get one. 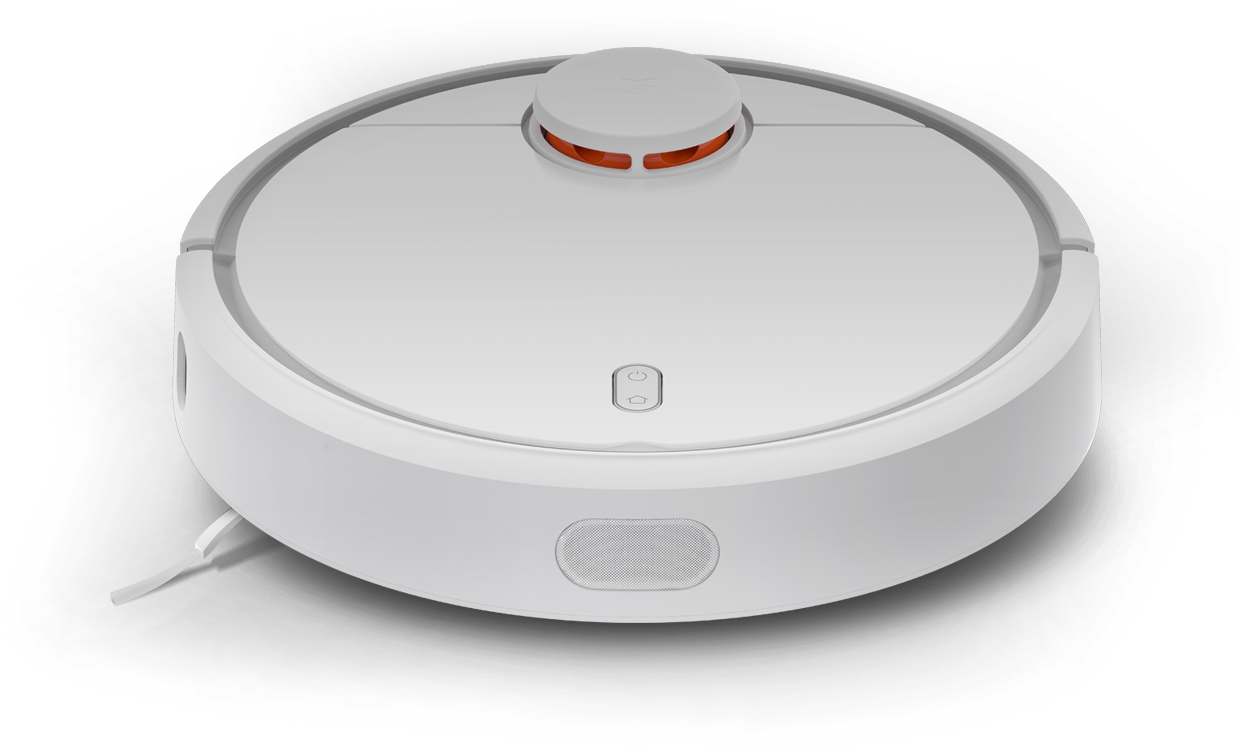 Before starting with the review, let us clarify that this Mi Robot Vacuum is officially not released in India yet and to purchase one, intended buyers have to ship it from International e-commerce stores such as Gear Best etc. It may, however, be available for retail sale in India but its cost will be higher owing to the fact that the device is officially not introduced into the Indian market but is expected soon.

What is Xiaomi Mi Robot Vacuum?

Most of us already know what a vacuum cleaner is and how it operates. But robot vacuum cleaners are a new age vacuum that is generally round in shape and does the cleaning on its own without having it to be controlled by any human. It generally has those sensors & wheels to perform its job.

But Mi Robot Vacuum by Xiaomi is a little different and smarter than any other such device we have come across. It also has a lot of intelligent features which we will be discussing shortly.

However, we would like to give an insight into some of the key features of this all-around sweeping robot such as Intelligent path planning, strong wind pressure suction, intelligent remote control and large battery lasting clean to name a few.

It has a large number of sensors that instantly synchronize the data to get to its three "brains", processors, which mimic the way the human brain thinks and works together to hand over the collected data to SLAM. The algorithm is built to form a room map and positioned instantly.

According to the map division area and the planned cleaning path, the cleaning path of the Z-shape along the edge is formed first, and the partition cleaning task is completed one by one. This is how it accomplishes its cleaning job and acts as a smart" robot, and a good helper for cleaning.

It is powered by a 5200mAh lithium-ion battery that on a single charge can last for nearly two and a half hours on a full charge which is enough for cleaning a small house. The battery is having overcharge and over discharge protection ensuring that the battery remains safe while operating on auto mode.

As seen in the above image, the design aesthetics of the device are circular, stylish and quite portable as compared to a traditional vacuum cleaner. It basically works with built-in sensors that are placed all around its body and it moves using two rigid wheels that can go inside and out and that can make it navigate easily even through the bumpy surface.

In fact, there are sensors for most things such as one for detecting walls, dust detection, drop sensor, collision sensor etc. which is why it has these High IQ that facilitates sweeping clean & fast.

On the top surface is a lid that opens up and unveils a transparent tray that will collect all the dust materials while sucking them with the help of its large suction fan and side brush. 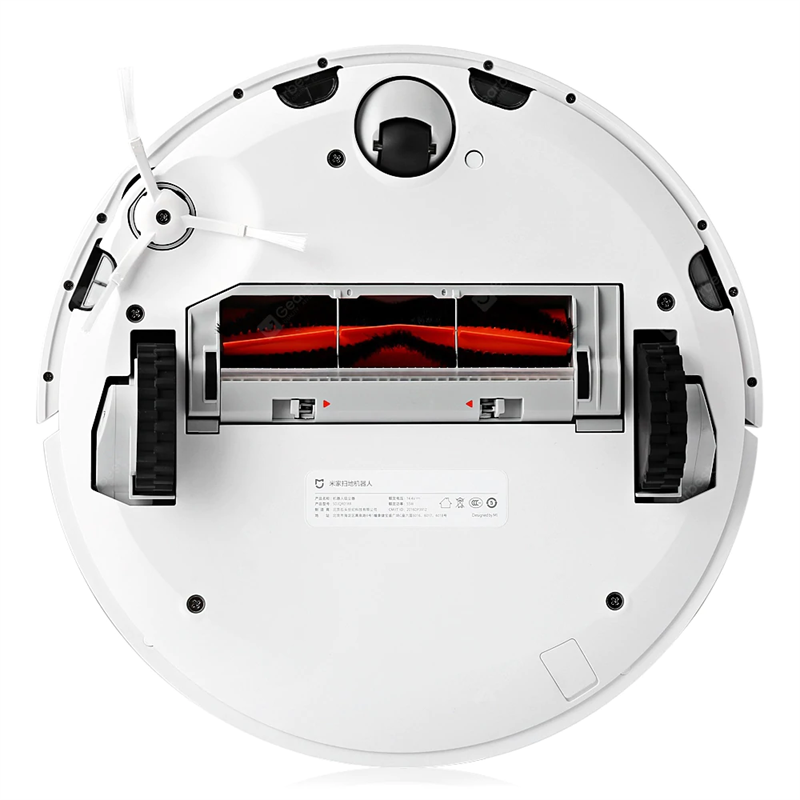 This robot vacuum device operates with the help of Xiaomi's Mi Home app that connects over WiFi. It can be charged using a charging dock and the interesting fact here is that the device can find the dock on its own when it requires to be charged and get itself docked to it to get charged up even if it is in the midst of cleaning at a distance or another room. Cool, isn't it? 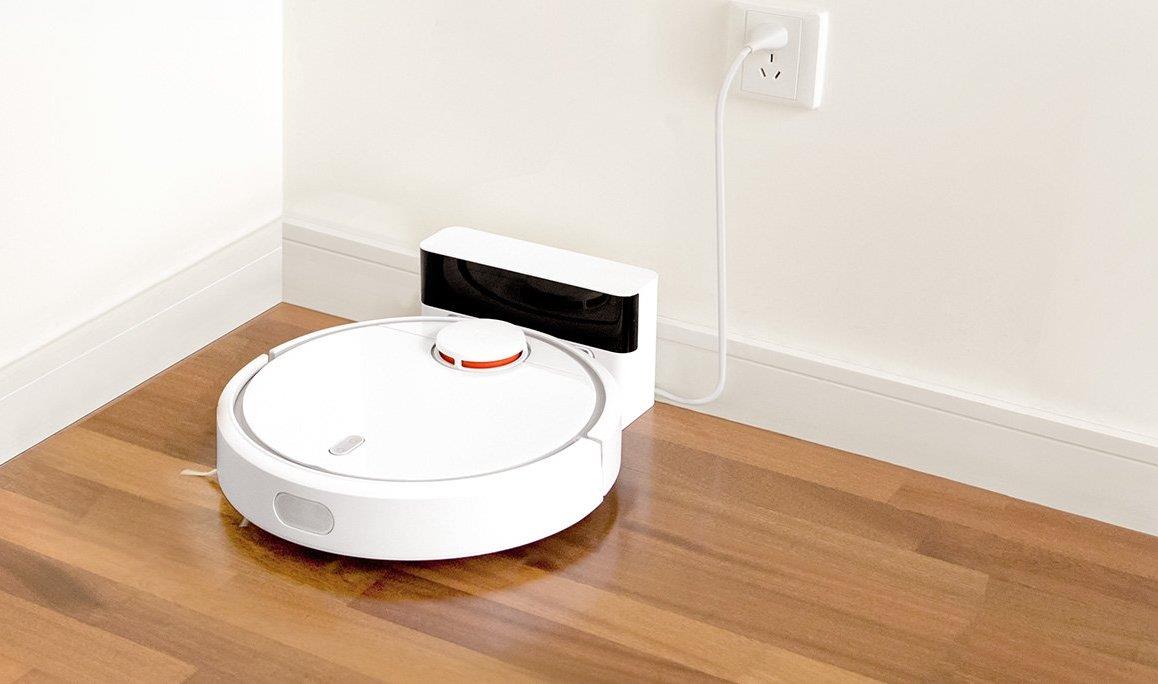 To turn the device on, we docked it into the charging dock and pushed the two front buttons together for a few seconds and a voice prompt could be heard. We checked the WiFi settings on our Android phone and could find an available connection for this Mi Robot Vacuum. It connected without any hassle to our Wifi network at home but connection took a while to complete.

The device can be controlled pretty well using the app and even though it can do the cleaning without any user handling, we, however, can configure it remotely and make it perform a task using the app manually. The app basically displays three parameters i.e. cleaning area in square meters, remaining battery percentage and cleaning time. Beneath the stats, there are tap buttons for Dock, Clean and Balanced.

It can be used over the Internet and if you are sitting in a different city altogether and you hit the clean button on the app, the Mi Robot Vacuum will initialize and with a voice prompt start moving and cleaning the scanned clean area. If it was docked while the command was pressed, it will first undock itself on its own and perform its intended job quite effectively.

As it is equipped with all the sophisticated sensors to avoid a collision or from falling down from a height in case if such a situation arises, its movement is quite an impressive stunt to observe for an automated robotic device of this size. Rest assured, it does not bang objects and breaks any precious items placed on the floor as its smart AI is smart enough to handle it. 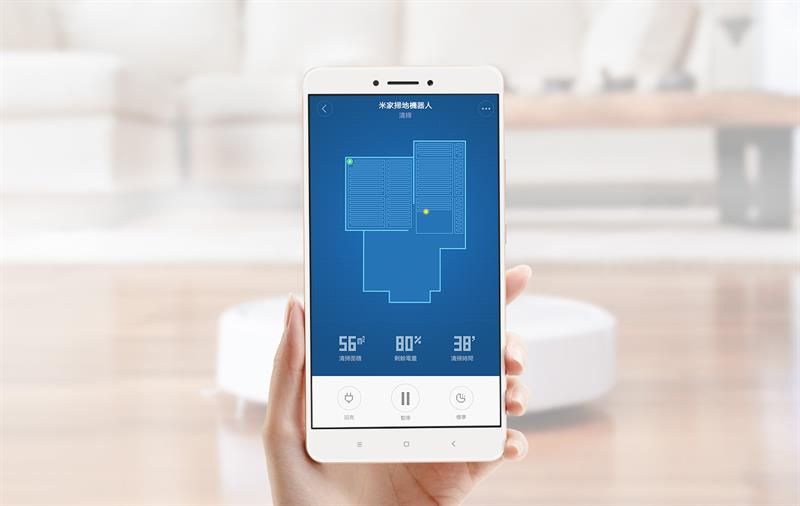 One thing that impressed us a lot about it's working procedure is that it scans the area of its interest where cleaning is to be done and determine its paths and caches the obstacles so that it can perform better every time it undocks and sets forth to perform its tasks.

Another good thing about this Mi Robot Vacuum Cleaner is that it is comparatively less noisy than a traditional vacuum cleaner. Thus people around the cleaning area won't be disturbed much and can easily adjust themselves with the level of noise it normally makes.

Is it worth buying or will it be a waste of money?

The cost of this device is around $450 and is costlier than other manual handling vacuum cleaners. But considering the fact that it smartly automates the cleaning so effectively, the money that one will be shelling out for this device is worth it and is highly recommended for busy people.

If anyone would like to disagree with us, what we can say is that if we prefer a manual vacuum cleaner at half its cost and engage a housemaid to handle it, think of how much money will have to be paid to the housemaid as wage for a year and how convenient will it be in comparison to this small yet powerful robot vacuum that operates on its own. A simple calculation explains it well. Period.

Xiaomi Mi Robot Vacuum is good at what it is meant to do i.e. cleans pretty well and does not leave behind any dust and particles. Its automated mode can be effectively monitored from wherever you virtually are in this world as long as you and the device have internet access. Remote monitoring and control is the best thing you can expect to ease your busy schedule and not to worry about home cleaning.

The downside of this device is that it will take some time to clean your entire house as against manual cleaning. But that won't be much of a problem as it will keep going on its own and you won't need to get yourself attached to the cleaning process. It will even take care of charging its battery if drained and resume its task automatically after charging itself. Another disadvantage that most people have encountered is that we cannot configure any restricted area for its movement. As such, there are high chances that it may also move over the wet surface which may damage the device.

We would appreciate the comments and feedbacks of our esteemed readers on this Xiaomi Mi Robot Vacuum. Do share your opinion on whether the great features of this device attracts you and is it worth pursuing.

In this article, we will talk about the features, overview and specifications of Samsung 5.5 Kg Smart Front Load Washer with Ecobubble technology and a streamlined shape of new Diamond Drum technology - WF550B0BKWQ. Look at the below article for details.

How to buy the best air conditioner in India

The summer season is here again and the sun looks scorching like never before. If you are planning to buy a new AC then you need to consider some factors for selecting the best one. In this article I have covered all main points which need to be considered before buying an AC

Here, I am going to give the features, overview and technical specs of Samsung -WF0602WKW- 6 kg Fully Automatic Front Loading Washing Machine. Please read the below article to know about its details.

Searching for top selling Air Conditioners in India? Do you want an AC with best cooling features? Kindly read further to know about the specifications of 5 star ACs from Voltas. In this article, you will be able to read the features of Voltas 5 star ACs and understand why Voltas split AC 5 star or Voltas 5 star Window AC is ideal with regards to power consumption.

For Indians, The cost of this mi product is so high so I think it will not be successful in India