Bitdefender has been in the business of developing Anti Virus solutions since 2001. They have had over 5 million downloads from the Google Play Store. The advantages that the tool offers include a seamless easy to use functionality coupled with high-end anti-virus features comparable to the best antivirus solutions around the world. 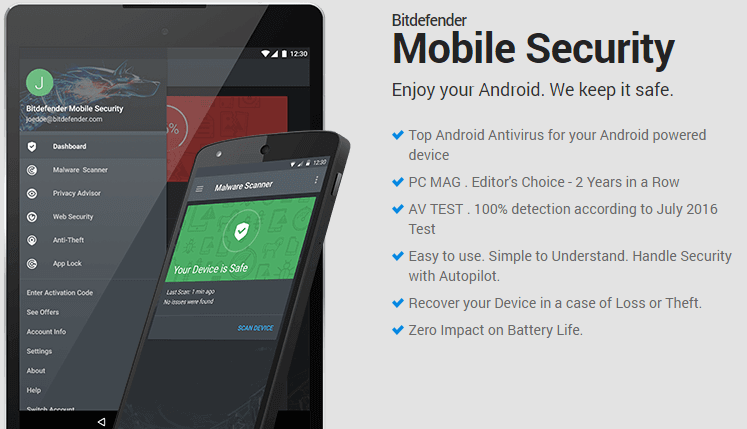 It has a good track record of protecting you from phishing sites and is considered the best application in its genre. In fact, the antivirus has been the winner of editors choice in many publishing houses and technology websites. The reasons thereof should be evident from the discussion we would be carrying out in the review ahead.

The Excellent Features worth the attention

The malware protection functionality of Bitdefender Mobile Security tool is high end in its own right. In fact, this high-end capability to protect your device against the malware is smart enough to make sure that you don't have to perform complicated steps to perform a proper scan or wait too long for it to complete. Under standard circumstances, you should be able to complete the task in just under half an hour. 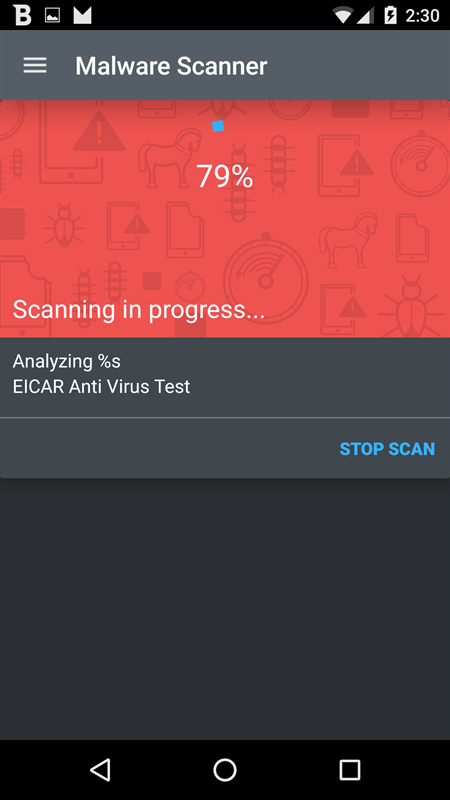 However, there is no option for scheduling scans. It feels like a big missing feature is a paid antivirus solution. The news apps you install or the app updates are always scanned and that is one of the best features in the right direction. The app also supports remote scanning functionality through the Bitdefender account.

Privacy Advisor is a valuable addition to the usefulness of the Antivirus solution that Bitdefender Mobile Security offers you. In fact, it provides you with a complete understanding of your privacy rating in the form of the privacy score and a rating.
The privacy Score offered to you would be in the range of zero to Hundred and the rating would be in three ranges of Low, Medium and High. The ratings and score would be dependent upon the apps you have installed and the permissions granted to them. Even the apps are sorted on the basis of the risk factor associated with them.
Privacy Advisor can be quite helpful in finding the apps that can be considered risky. In fact, if you are on Android Marshmallow or higher, you may choose the permissions at a granular level for an efficient handling of the issues concerned with your privacy and its protection.

This is a feature that most of the Antivirus providers have been including in their package. Bitdefender is not an exception either. The service packs in an efficient Theft Protection feature into the tool in a useful manner. 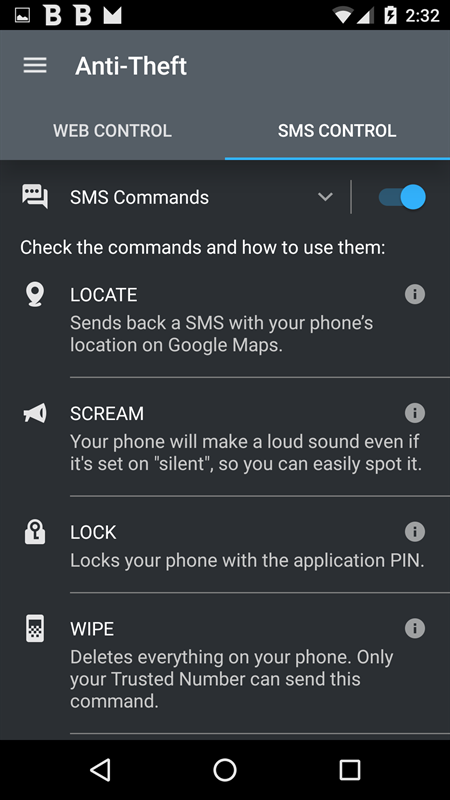 The theft protection feature lets you lock, wipe or locate your device remotely. You would need the Bitdefender account to enable the functionality so that you can use the feature. If you do not have a PC nearby, the commands can also be triggered with the help of an SMS command. That can be a great way you can use to locate or lock the lost phone. Even if you don't get your phone back, you can protect your data from being accessible to someone else.

Also referred to as Web Protection, this in Bitdefender Mobile Security is one of the best options to take care of the risks involved when you attempt to open untrusted sites. It provides you complete safety against the phishing sites and other malware attempts.
Given the fact that the desktop version of the Bitdefender Antivirus has been a capable option in web protection arena, it is quite natural to expect the expertise being visible on the Android version as well. In fact, Bitdefender Mobile Security sits on top along with Norton, in being one of the best provider for web protection.

Well, we do not buy an Antivirus solution for its looks and appearance, but a simple interface and usability is what we would definitely look ahead to. Bitdefender Mobile Security lives up to this expectation.
The interface is quite simple and makes it an easier option to get used to. It conforms to the Google's Material Design outlook and stays the best with its performance in terms of usability. All said and done, you may be a little appalled at its lack of visual delight in its interface, but we do not think that it should be something that matters when you are getting the best ever protection coupled with an easy to use functionality that does not need a steeper learning curve to master the tool.

A tool meant for Antivirus solutions should be focussed on the Antivirus features alone and that is exactly what Bitdefender does. Unlike a few service providers who try packing in practically everything in one package may not be what you would need.
Bitdefender Mobile Security, however, offers you a few practical solutions, though not overwhelming. A reports tool and an app lock option are some of them that would add up to the functionality of the tool. The features should be self-evident from their name itself. The reports tool provides you complete details about the activities carried out by the Bitdefender Mobile Security on your device, while the App Lock feature lets you lock your apps against the unauthorised access by strangers.

The Price and Plans

The Bitdefender Mobile Security solution is reasonably priced and is offered at a price of Rs. 699 for one PC per year. The plan comes with Auto renewal Feature.

You may check out the discount coupons from a few reliable sources over the internet. But, beware of the malware infested sites. Make sure you use the official interface to buy the tool. Alternatively, you may buy the software through Google Play Store, which will indeed be the best way for the purchase.

The simple and at its best - possibly that should be one of the reasons that Bitdefender Mobile Security has been on the top of the Editors Choice lists by a host of reviewers. The lighter functionality, reasonable pricing, and a robust malware detection should make it the GO TO solution for most of you Android users looking for the best performance and security for your Android device.
The fact that they have been constantly updating themselves and have been refreshing the experience should be something you can give it a try. In case, you do not want to go Pro straightaway, you have the option of checking out the 14-day trial version to get used to the features.