With the advent of Reliance JIO, the telecom market was confounded with the offers and data rates offered by the giant. The so-called BIG-FISH of the telecom industry, namely – Idea, Airtel and Vodafone were worried over the loss of customers in the light of super-attractive offers by JIO. And for the first time ever in the history of telecom evolution, people were standing in long queues for days and not hours just to procure a SIM Card that allowed them to talk for free and use the internet for free. In fact, the trend was of such an accord that the Demonetization Queues were being criticised but not the ones for the JIO SIM Cards.

Well, the other telecom companies thought that this rush will be wiped off in a swift swap once the year ends; but JIO announced that the offer will be valid until March 31, 2017. With the end of the trial period approaching, JIO devised completely new offers for PAID services; but still are BETTER, CHEAPER and REALLY FETCHING as compared to the other post-paid and prepaid plans. Though Airtel, Vodafone and Idea released new offers as well, but a comparison of all plans with the ones offered by JIO will speak for itself. The consumers were recharging their JIO numbers with PRIME offers when the news of IDEA and Vodafone merger hit the market which was another attempt at garnering the biggest consumer base. But still, the offers don't stand in comparison to Reliance JIO.

Check out some cool Jio Prime plans and offers.

A comparison of Pre-Paid Plans – JIO Leads All Brands and Offers: 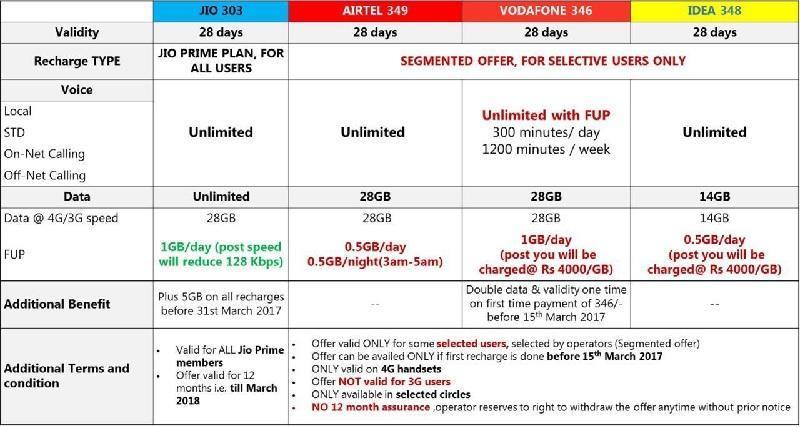 Post-Paid Plans – Jio and Others:

After having compared the Pre-paid plans of various telecom companies, let us check the post-paid plans so as to find out whether JIO aces this as well or not. It was not long ago when JIO announced the Prime offer and other plans for the paid services and the customers that were thinking of throwing their JIO SIM Cards away are now recharging their SIM Cards for the scintillating offers.

While the competition is still burning hot in the telecom industry, the prices of post-paid services have also been slashed and the consumers are being tricked by a manipulative re-structuring of the plans by Airtel, Idea, and Vodafone that is only creating segmentation in the consumer base.

The comparison of JIO and other operators for the post-paid services can be well understood from the following table:

A comparison with Airtel:

What is ACTUALLY going on??

With the rates being slashed, services and data amount being increased and competition still becoming biting at every single second, the companies other than JIO have just SEGMENTED their consumers. They have targeted the premium members only and have sidelined the people that NEED the data. In this attempt of theirs, they have tried to make those customers happy that were already availing their services and are classified as the ARPU Customers.

Idea Select Titanium, Idea Select Platinum, Idea Select Gold, and Idea Select Silver are the other 4 plans that have been launched and are being marketed. These plans will divide the users based on their monthly billings. The maximum benefits are being offered in the Idea Select Titanium which means that the elite are served the best. With the motto of making "Data a RIGHT and not a PRIVILEGE", JIO has not at all created any segmentation in the market and is actually working towards the Digitization of India.

Come what may, the Telecom Companies in the market are not able to beat Reliance JIO offers and services that are being offered at such exciting prices and without any distinction between the users and their bills. Though the companies are marketing their new plans as the BEST, but this article will surely help all the users to understand BETTER.

Reliance Jio Prime Membership Offer - Everything you need to know

Reliance Jio launches Prime Offer, Mukesh Ambani has announced Unlimited Benefits For 12 more months. According to the announcement now Jio Prime users will get 1 GB data daily. Basically, Happy New Year Offer has been extended by one year for its PRIME members at Rs 99.

Reliance Jio is coming up with a few new plans called JIO Dhan Dhana Dhan plans. Check out the details of the new Jio plans, which are expected to replace their Summer Surprise offer.

Reliance Jio - How has it impacted the Indian Telecom sector?

Reliance Jio has indeed completely disrupted the Indian telecom sector in the recent months. The fact has been clearly vindicated by the unprecedented growth in the broadband consumption in India. How has this been possible? That is exactly what we will cover in the following paragraphs.

Mukesh Ambani recently announced about another mind blowing product. A phone at Rs. 0, sound fantastic right. Reliance's Chairman finally announced Jio Phone which will be free of cost and will support 4G network as well. Let's find out more about it.

Reliance Jio's offers are more beneficial compared to other telecom companies offers. Airtel, Idea and Vodophone are struggling to keep pace with Reliance Jio. Prior to Reliance Jio entering the telecom sector subscribers were at the mercy of these companies and had to accept the unreliable and costly services from these companies.
This competition will benefit subscribers in the long run.