Chromecast is getting popular due to its variety of content offering through Android apps. A lot of these apps offer you access to the global content. Some services for Chromecast are free and some are subscription based services. Let's take a look at some of the Apps that you can use with Chromecast. 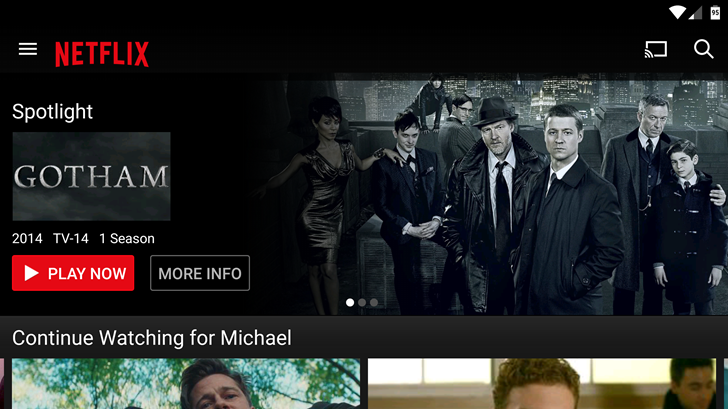 When it comes to streaming television, the most popular network is Netflix. It is not only popular for streaming TV shows, but it also has its own content. It streams sports, movies, TV shows, documentary and much more. However, Netflix requires a lot faster network for streaming. It does allow buffering of content. But still, it needs better Wifi or 4G network in Chromecast to work well. Netflix doesn't have any free content in it. So it forces you to subscribe for watching the stuff for free. There are no ads, so you are in luck if you want to watch ad-free content. Subscription is also on the basis of the media accessing the stream. It has moderate subscription charges, so you should be a lot comfortable compared to the cable network charges. The app on Google Play Store, however, can be downloaded for free.

Crunchyroll is one of the popular anime streaming website. The site is well known for showing the latest anime episodes few hours after releasing in Japan. So anyone who wants to watch anime with English episodes can use this service. Apart from anime, there is some other stuff such as art, cosplay etc being aired from the app. If you are into Animation and manga, then this is a must app for you. They are subscription based service. However, they do have some free content with ads. However, for latest anime content, you may be forced to accept the subscriptions. The site can be accessed through Android app in tablet and also through Chromecast. The app in Chromecast store is available free of cost but the video content is available through subscription only.

Twitch is known for its live streaming content from gaming, news, sports niche. There is always at least one Streamcast being aired on Twitch. This being one of the popular places where people show their gaming skills and share the game previews. People like Pewdiepie and few others are using Twitch as a platform for streaming the gaming content. There are plenty of popular YouTube users are using this platform. There are promos of top gaming companies being streamed through Twitch. So if you are into streaming games and watching others play the latest games, then this is the app worth checking out. The twitch streaming service is free but supported by ads. So you may have to download the app and upgrade to Pro version for getting rid of ads. You can also stream your own content through the app itself.

TED platform is known for it's educational and viral content. It is definitely a good place for learning new stuff. Lots of reputed people in various industries use this platform to share their stuff. Also, it has turned out to be a good story telling platform. So if you are in search of such content then TED on Chromecast is worth checking out. There are two different sections of this platform. The one being hosted talks and interviews. And another the explainer video series where they show you the conceptual explanation of things around. Though TED has got bad press due to propaganda speech lately. But barring that part, it is one of the good places to learn from and get exposed to new concepts. TED is free to use on the Chromecast. All you have to do is download and use the app from Google Play.

When it comes to Radio and Podcasts there are plenty of good apps out there. However, Spotify holds the top most position when it comes to streaming radio. But their radio is limited to US and UK. You may find that TuneIn radio has some good options which can make it usable on any place outside the United States. You can use it from India to access some local radio content. You can use it for accessing sports, talk shows, podcasts, eBooks, and documentaries. There are plenty of content options available inside the app. It comes with subscription and free streaming options. A subscription gives unlimited access to the content and it gets rid of the ads too. In the case of TuneIn radio, you'd find that free option is good enough for casual streaming through Chromecast. The app is available free of cost to download through Google Play store.

Chromecast has plenty of content apps that can be used as an alternative to cable TV. However, a lot of native apps don't have the native content. Instead, it has global content which is neutral to geographic region. The above-listed apps are good for generic streaming use that suits anyone's entertainment requirement. If your use case falls into the niche of one of these apps, then they are worth giving a try.

Know how Google is pushing into electronics hardware manufacturing by the launch of Chromecast. Read the features of this streaming device which is here to compete with Apple TV with one-third of its price.

Do you want to stream the content of your smartphone on to a television or through a projector wirelessly via Google Chromecast, Miracast or Apple's iOS Devices? If you want to play your favorite games on LED TV or watch a new movie from mobile phone on big screen, this article tells you different ways of connecting up wirelessly.