Nokia 3310 will always be remembered as one of the smartest phones when smartphones were unheard of. Nokia is making MWC 2017 a platform to a memorable comeback. What else could have been the a better device than a Nokia 3310? It indeed has a great value and we will be reviewing the new relaunch in this article.

The New Nokia 3310 - Everything you should know about it 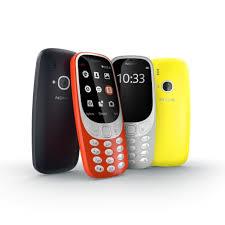 The Nokia 3310 was a well known device for its durability and longer battery life. And not to forget the most famous Snake Game! The relaunch of the iconic device has been the best thing that Nokia has thought for its grand comeback.

The Look and the Display

The Nokia 3310 comes with a design language that closely resembles its old sibling. So much that the look of the keys and the iconic border around the screen that defines the 3310 has been retained. However, Nokia has taken care to make the device more contemporary with a few modifications and alterations.
To begin with the weight has been considerably scaled down - from 137 grams on the original device to just 97 grams on the new one. The plastic build looks beautiful, but only the end users will be able to tell us about the durability. As for the colors, it will be available in Dark Blue and Gray. Apart from these iconic colors, you can also opt for the ones in warm Red and Yellow colors. If you are buying the phone for its nostalgic value, we would advise you to go for the Dark Blue and Gray variants.
It does offer you a 3.5 mm audio jack at the top end and the MicroUSB port at the bottom. These are again, the contemporary features.
The display is top notch as compared to the original version. The phone has a 2.4 inch screen and offers you a 240 x 320 resolution. The full color display is in sharp contrast to the old device. The display is bright enough. The readability of the phone is quite great for the phone that it is.

Well, the Nokia 3310 is a feature phone. If you are looking for some Android variant on your device, you may not be happy with it. The device comes with Nokia Series 30+ on the phone.
As you might remember what we had on our initial phones, the Nokia Series 30+ will offer several options. Call logs, Messaging, Contacts, Calendar, a simple browser and a few other menu items can be navigated through the dial pad.
The Nokia 3310 will not offer you 3G or 4G compatibility. It can work only on 2.5G. The default browser on the device is powered by Opera. The phone has a 16 MB internal storage capacity. You can expand it further by another 32 GB.

The Camera and Battery

The Nokia 3310 offers you a 2 MP camera on the rear of your device. However, do not expect any huge camera features on your device. There would be no flash, HDR or any other such high-end features. But, it will be a good camera that can help you click some occasional snaps.
It should be remembered that the original Nokia 3310 had no camera. In fact, the device came in such an era when no smartphone maker had thought of adding up camera on their mobile devices. Obviously, the camera happens to be the new feature on the revamped Nokia 3310.
The Nokia 3310 was well known for its long battery life. The battery lasted several days. The new Nokia 3310 keeps up with the tradition. It has a 1200 mAh battery compared to the 900 mAh on the original device. The device offers you 22 hours of talk time and 31 days of standby time - so says the manufacturer. The latest offering also has MicroUSB charging and as such you do not need to look for the proprietary Nokia charger anymore.

Is the Nokia 3310 worth buying? Well, only if you have used the device before. We mean, if you are nostalgic about the vintage Nokia 3310, you will definitely want to buy the phone for you love it. If you are planning it as your primary device, it may not be a good option.
The device will be priced at around Rs. 3500 to Rs. 4000. We do not think anyone will spend that much of money on a feature phone when you can buy a budget smartphone by hiking your budget by just another thousand bucks.
The launch - or relaunch of the Nokia 3310 is not a means of earning any revenue for Nokia. We assume it has been launched as a symbol of love that the brand has (or had) grown in the past. It could be also be possible that the most loved device from the 2000's has been launched to mark the comeback of the brand Nokia and make it a memorable occasion.

Well, we are nostalgic as you are. After all, we belong to a generation that has seen the rise and fall of a giant like Nokia. No other device than a Nokia 3310 would have been a better choice to commemorate the comeback of the brand. If you want to use it as a secondary phone - it is definitely a good option you can go for. From the emotional point of view, the Nokia 3310 is indeed a great decision from the company.