Aadhaar Enabled Payment System has been formally announced and launched in India. It will be rolled out gradually across different banks in a phased manner. The new mode of payment will let you make payments using your Aadhaar Number and biometric impressions. 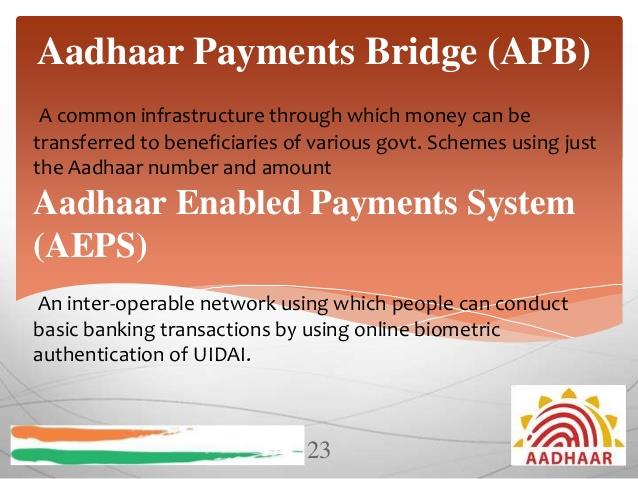 Being a new technology, it can confuse most of the users. After demonetisation, Government has been promoting cashless economy quite aggressively. Aadhaar Enabled Payment System - or AEPS is one such mode that will let the consumers use their Aadhaar card as their payment gateway. We will let you know how to make (or receive) payments using AEPS.

What is Aadhaar Enabled Payment?

UPI, or the Unified Payment Interface was a breakthrough in terms of cashless economy. Your mobile phone doubles up as your debit card in case of UPI. Your identity is authorised through mobile. AEPS carries this information still forward.
In fact, the basic infrastructure that supports UPI is your Aadhaar Number. UPI links your mobile number with the linked Aadhaar number, and in turn to your bank account number. The underlying principle of Aadhaar linking has now been given a shape of using the Aadhaar number itself as a means of authenticating payments. That would mean, your merchants will now use finger print scanners instead of POS terminals for accepting payments. Your Aadhaar number and the finger print information will be matched to authenticate your bank account.

How to make payments through AEPS?

Well, the mode is still under development and adoption. It could be quite early to make any solid mentions about the manner in which you can make payments as things stand at this moment. However, the basic route for making payments through AEPS would be on the following lines.
First of all, you will need an Aadhaar card (that is quite obvious!). You may not need to carry the Aadhaar card physically. If you know your Aadhaar number, it should be sufficient enough. Make sure you have linked your bank account to your Aadhaar number. We would guess you have already done it, given the KYC norms stipulated by banks recently. If you have not linked your bank account yet, you may need to visit your bank branch to complete the formality.

Your merchant needs to have a few prerequisites. He needs to have the support for Aadhaar Enabled Payments. He will need an Android smartphone, a fingerprint scanner, and a bank account. The merchant has to install the Aadhaar app on his smartphone. The app is currently not launched on Google Play Store. We hope it will be available soon.
When you are about to pay, you just need to provide your Aadhaar number and give your finger print. Choose your bank and the payment is made. No need to carry any sort of card or load the E-Wallets. The best part with the service is you do not need to install any app on your phone.

What is the current status?

To be frank, the system is still under development. It could be early days for the adoption of Aadhaar Enabled Payments.
State Bank of India and IDFC Bank have been on the forefront for launching the application. State Bank of India has adopted Shirki village in Pen Taluka in Maharashtra to formulate and test the Aadhaar Pay, while IDFC Bank has rolled out the plan with 100 merchants. The have been using a solution through a mobile app tentatively called Aadhaar Pay. So, is essence - you may not be able to make the AEPS payments even if you want.
The Aadhaar app is currently not available on Google Play Store. We expect it be live soon. The infrastructure (by which we mean the cost for Android smartphone, and finger print scanners) is provided by the banks, to begin with. However, it may be a paid service in future when the system takes off in full scale.

What does the future hold?

We would expect a wider usage of the Aadhaar Enabled Payments to be more popular in villages. Our assumption is that loading money into E-Wallets and owning a smartphone may not be a common thing to be seen in smaller villages.
As SBI Deputy Managing Director and CIO, Mrutyunjay Mahapatra says

"The consumer does not have to remember any password or PIN to make an immediate payment. We plan to drive this initiative across villages pan India."

. It will actually bring even the people from the remote corners of the country to digital payments movement and let them pay digitally without even having a phone.
The newest cashless mode of payment holds better prospects than the other methods like credit or debit cards, or even the recently introduced UPI system. It does not need you to carry any sort of cards, or even remember PIN. You just need your Aadhaar number and finger print to authenticate your payments. It does not any technical know how to use the mode of payment.

The technology behind Aadhaar Enabled Payment System is indeed noteworthy. It would, in fact, put the much hyped Aadhaar cards to practical use. Moreover, the simplicity of the mode should make it one of the widely used modes of the cashless transaction - especially in smaller villages and towns. You do not need to have experience with any kind of technology to use the system as it solely depends on your finger print information and the Aadhaar number. Aadhaar Enabled Payment System can be an important step towards making the marginalised sections of the society a part of digital payment movement.