Internet has brought the government at your doorsteps. Labelled EGovernance, the Digital India initiative by the Union Government has been instrumental in bringing up a sense of inclusiveness among the general public when it comes to governments projects and initiatives.
The aim of the Digital India campaign was to provide an effective Online governance. The first step towards that goal was the introduction of smartphone apps. These apps work as an effective means of moving to EGovernance. Here are the best EGovernance mobile apps that make your online government tasks easy.

MyGov is a means of getting a direct citizen partnership in the governance. In fact, it has been considered as the most innovative citizen engagement platform by a government. The app lets you share your inputs, suggestions and ideas about different Central Government Ministries and organisations.

The MyGov app works in a simple and intuitive manner. You would only need to create your account on the app using Email ID and other details. Once logged in to the service, you can access different sections of the site as per your choice. A couple of different government initiatives available on the app include Swachh Bharat, Open Government Data Platform, My Gov Task Management and My Gov Newsletter. You can connect seamlessly with various government programs through interactive discussions and creative suggestions.
The MyGov app offers the citizens an option to participate actively in the formulation of policies. This is a great way to bring in the era of participatory democracy.
The app has had over 500000 downloads so far and has a total following of 451000 on Twitter.

The Prime Minister's Office comes straight on your smartphone! Yes, this is the official app of the Prime Minister of India. You will be able to interact directly with the PM through the app. The app lets you get instant updates, information and interactions from the PM. 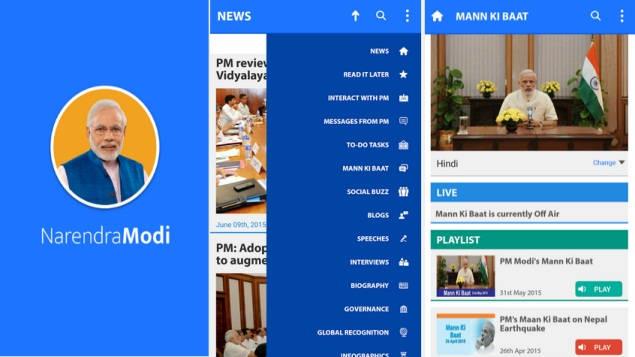 The app has made Modi the first Indian Political leader to have his own personal app. The app is designed to provide instant updates on the Prime Minister's activities and sharing your ideas with him. In fact, it reduces the distance between the PM and the citizens. The app also has informative infographics depicting the performance of the government.

In addition to receiving the updates about the government programs, the application lets you have emotional tidbits of being able to receive birthday greetings and email updates straight from Narendra Modi.
The PM uses this platform to share his personal ideas, blogs and activities with the users. The app has received rare reviews and has been able to get a user base of around one million downloads. The Twitter following of the app has been an estimated 2000.

Well, it is the official app of the Ministry of External affairs, as is evident form the name itself. It works as a one point source for all your information on the External Affairs ministry.
The app has been developed with a user friendly interface that is quite intuitive. It does provide all the related information with informative graphics and visuals. The app has been designed with a view to resolve the issues of unresolved phone calls and never ending queues for the formalities with respect to a few services like Visa, Passport and Embassy information. Some of the sections covered under the MEAIndia app include - E-Citizen, Passport services, Follow PM/EAM, and Indian missions abroad among others.

The app lets you get updates from over 100 Indian embassies. It also lets you get in touch with the External Affairs minister to address your concerns and queries. The passport section of the app provides detailed information on how to apply along with information on the location of Passport Seva Kendras and the forms to be submitted. The app also has information updates on Kailash Manas Sarovar Yatra and Haj Pilgrims.
The app has been done really wonderful and has garnered over 50000 downloads. The Twitter follower Basis of the app reads 900000.

If you are one of those who has always wanted to make use of the Right To Information - RTI – for any of your requirements, but avoided it because of the tedious process involved in it – this is definitely the app for you. 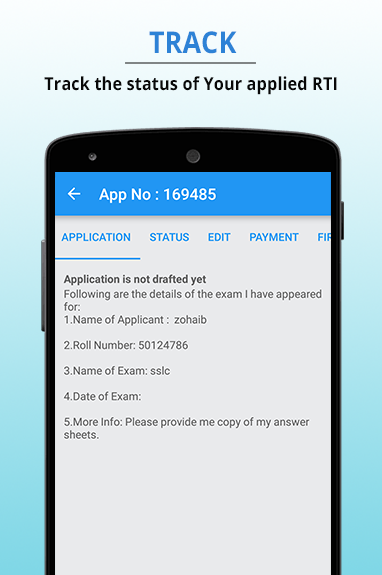 You can use the