Ever since the "Smart Phone" era began, Samsung has been a key player in it. Samsung launched their first mobile in 2004 and has been ruling the market since. Being one of the strongest mobile manufacturer company, the company has been launching its various smart phones. It has recently developed smartphone running Tizen Os, as an alternative to its Android-Based smartphone. It's come up with another amazing device 'Samsung C7'. It is expected to come out in market by the end of 2016. 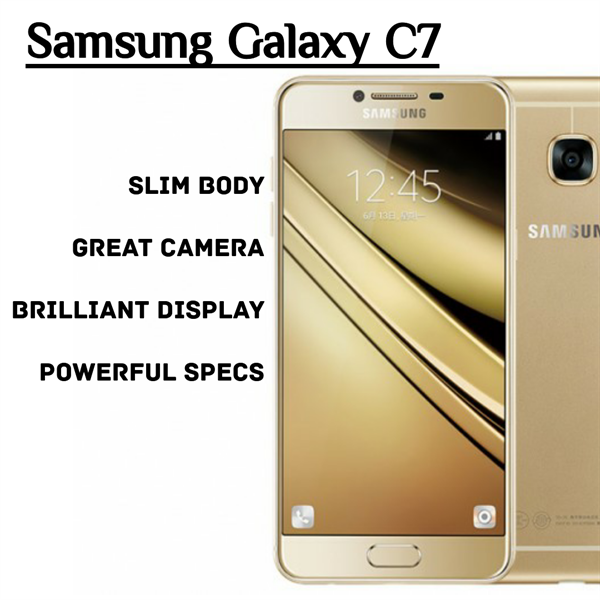 The Samsung Galaxy C7 comes with 5.2-inch touchscreen display with full HD resolution (1080x1920 pixels) retaining a pixel density of 424 ppi. Thus keeping up the name of Samsung which was always known for its crisp and clear display. The Samsung Galaxy C7 has a string metal body. It will be available in gold and pink colour. It has a slim waistline of 6.7mm thus making it stylish and cool. It weighs only 165 grams. It's a good looking device and caters young generation's needs of good looks

Samsung being the most trusted brand, The Samsung Galaxy C7 has 16 MP rear camera with dual Led flash. It has 8 MP front camera, thus catering young generation's selfie addicts. The camera quality is fairly good. The Samsung Galaxy C7 has many connectivity options like 4G/Wi-Fi with hotspot, Bluetooth 4.2, GPS with Glonass, Bluetooth 4.2 and microUSB 2.0. It supports 2G and 3G along with 4G. GSM SIM is also supported.

When it comes to great looks and performance the Samsung C7 is the phone for you. It has attractive design with amazing display, good battery back-up and heavy performance features. It has latest and amazing features thus justifying its price.