We all have curiosity to explore the unending universe. However very few games and simulations allow us to explore in their gaming scenarios. No Man's Sky gives you a chance to explore the universe. It doesn't stop at that but also gives you chance to name the celestial objects encountered along the way. The game is not limited to exploration and Terra-forming, as it also allows you to do the combat.

You start the game by exploring multiple planets in the space. This process is very time consuming due to the game's open space nature. This means that the unending universe scenario is in play here. You come across three different types of races while playing this game. Almost every random planet you come across for battle, has one of the three races in it. There are some of the creatures that you may come across commonly in multiple planets. The language of aliens is not at all understandable. The reason being a lot of it is made up and random. You do however get pointer to make way across them. You may also need to save scenes as you complete them. 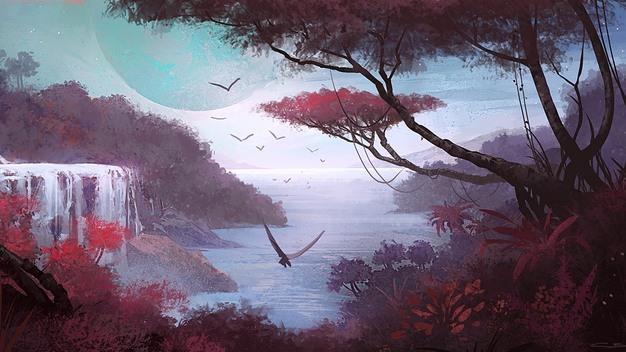 The reason being if you get lost across some points, you may find it hard to come back. The game at some of the points does offer you direction on where to go and make your way around. You'll be also impressed with the amount of tech in the game. You get some coolest ships and vehicles. The weapons may not be impressive though but considering the game being an open space system, it's understandable. The procedural way of completing the game makes you explore some of the beautiful places. You can also name the stars, and planets the way you want. There are some puzzles driven by alien dialogue along the way. Some of the puzzles are specific to a planet or place. So there is a lot to explore and check out in this open spaced game.

The best part about this game is graphics. You'll find excellent art of galaxies, alien creatures and planets. The level of detailing being done by the artists is much more than any Hollywood movie. The amount of places you can explore in this game world are endless. So the designers have managed to put things in the perspective. For example, planets without water have different aura and feel to them. This is something you'd also relate with the simulation in most of the space exploration games. 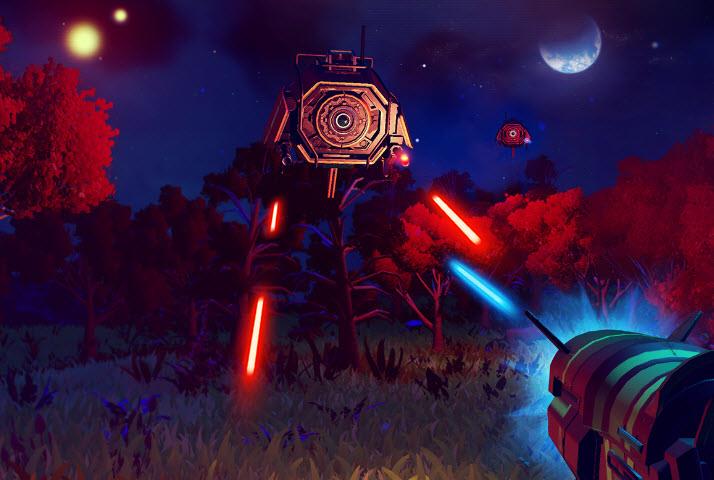 Each planet is of enormous size and you can still notice the level of detail in each one of them. In case of alien planets with life and water in them, those planets are designed with very careful art details. Some of the alien creatures are quite common like most of the games. However you'd find graphic shading and art rendering a lot different for most alien shapes. You may find that there are some rendering issue in space but those can be ignored as the game is yet to get some of the update.

Graphics being the dominant part of this game, I am guessing the developers had to work hard on soundtrack too. You'd find some of the soothing music on unexplored area. There are some of the parts where music is extremely slow and laid back as long as you explore. In case of alien regions and the battle, you may find the change in the music. Some of the music in scenarios is more of industrial genre and remaining being in ambient. If you play it long enough, you'd find that it's very comfortable on the soundtrack front.

Though game is perfect for those who like open space type space adventure game. However it has its share of issues which you may come across. The most common issue being in some of the parts the game freezes. If you try to pause the game during the flight, you'd end up crashing the visual engine that renders the game. So there are some things that require a lot of testing. Some of the times exploration gets out of hand and requires guidance. It totally makes harder for playing game without getting frustrated. Game is not much attractive to those players who wish to focus more on combat specific scenarios. And the last and the most issue with the game is that game is currently limited to single player. This makes it harder to play the game with friends.

The game costs 60$ for the final version. If you have played the beta online as a tester then it'll remain fixed on that update. The ratings of the game makes it suitable for playing to all age levels. You can use Steam to download and play the game online. It may soon also hit the local stores with boxed packaging.

If you are yet to download or purchase the game from Steam store, then wait for the next version. You'd find a much polished and bug free version in next few weeks. So that would cover most of the game issues over a period of time. However if you can't wait to explore the space then do take a look try this game. No Man's Sky is a sci-fi visual treat and you won't be disappointed on that front.