There are so many cricket games for all the platforms. Some of the games have stunning graphics and 3D animation that you feel that a real game is going on. Some have complicated controls but you can hit the ball the way you want in them. But, here is a game that is quite different from most of the cricket games that you have played. Stick Cricket Premier League is not a game known for its amazing 3D graphics. Actually, this is a 2.5D game on Android. The best part about this game is the controls. It has controls that are so simple that you need only two buttons to play this game. But believe me, this is an addictive game and once you start playing it, I am afraid, you will not stop until your smartphone battery dies. This game is mostly about timing and fast decision making. 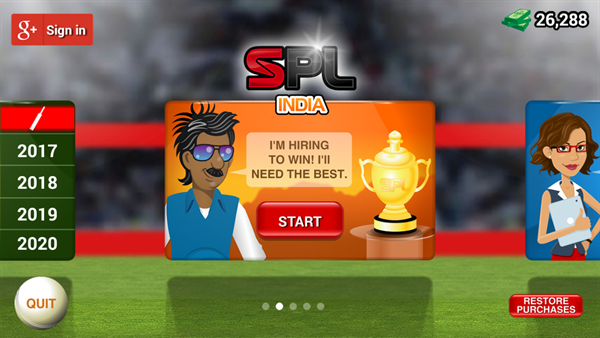 Basically, the teams are from IPL (Indian Premier League) and you can choose which team you want and at the same time, you are included in the game as the captain of the team. There are many other features in the game which I will describe below. This is a free game. But there are in-app purchases which you can make to buy additional features. Buying anything can remove ads from the game.
Let me now walk you through the basic concept of the game.

Stick Cricket Premier League is a 10 over cricket game including the teams from IPL. When you first open the game you are presented with many different options. There are two options for you to play: the Australian League as well as the IPL. If you want to play the IPL then touch the start button on the India tab. Now you will be presented with a screen where you can enter the name of your captain. You can enter your name and be the captain of the team if you wish.
Now touch continue, and you can adjust the appearance of the captain; the skin color, the hair color, and whether he is right handed or left handed. Now select Continue and you will be brought to a screen where you can choose the team you want to play with. Here you can select the team. But remember, this is a five-year deal and once you choose a team you have to play five seasons with them. Now you will be given some instructions.
Touch Next and now you can start the auction. Touch on Start Auction button and select the players you want; there are star batsmen and star bowlers. After selecting the 4 players you can touch next and start playing the game. Sounds great, right? 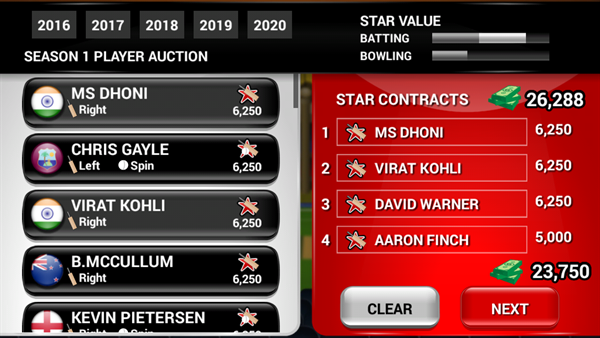 You have to have money to recruit coaches and add the best players to your team. You can buy coins directly online. Or you can earn coins by hitting sixes and thus increasing the appearance fee. Your team owner also gives you some amount of cash when you finish each season. Try to make him happy by winning or being at the top 4 in all the season. 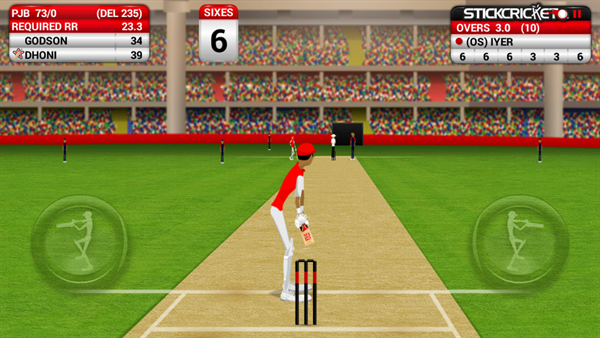 I have been playing this game for quite a number of days now and I am fairly good at playing it. Earlier, I used to think that games should have amazing 3D graphics and extraordinary sound effects to give you that pleasure. But, later I realised that the gameplay should be simple but not so easy that you can easily win it every time. I have also written an article on some of the simple but amazingly addictive games in Android. You can check it out here.
Stick Cricket Premier League is a simple game to play. The controls are really easy. There are two buttons; one on the left and one on the right. If the bowler bowls on the right side of the batsman, then touch the right button or else the left button. It is as simple as that. But a slight mistake in timing from an average batsman can result in a wicket. It takes time to adjust to the timing of the game. But eventually, you will get good at it. If you touch at the perfect time, you will be rewarded with a six. You can get runs as 2, 3, 4, and 6.
In this game, you cannot bowl. You are provided with a target score and you have to chase it. Mostly, in the finals, the target will be high. It will be difficult to chase that.

These are some of the tips and tricks that I would like to give you to play this game effectively and snatch most of the matches from the opposition.

Here are the pros and cons of the game.
Pros: It has a great gameplay. It is challenging and addictive. Simple controls can help even a new person to play. There is an option to create your own team.
Cons: It would have been better if it had displayed the man of the match, man of the series at the end of the matches or the season.

Stick Cricket Premier League is a game I love a lot and play a lot. Its combination of simple controls and difficult and challenging timing has really amazed me. This game was developed by Stick Sports Ltd. There are more than 1 million downloads of this game on Android. So, if you are looking for a unique cricket game, then this is the one for you. What are you waiting for? Head to the Android Play Store and download the game. It is written in their official description, that Stick Cricket Premier League is easy to play yet hard to master. Don't forget to comment on how well you are doing with the game. Happy gaming.