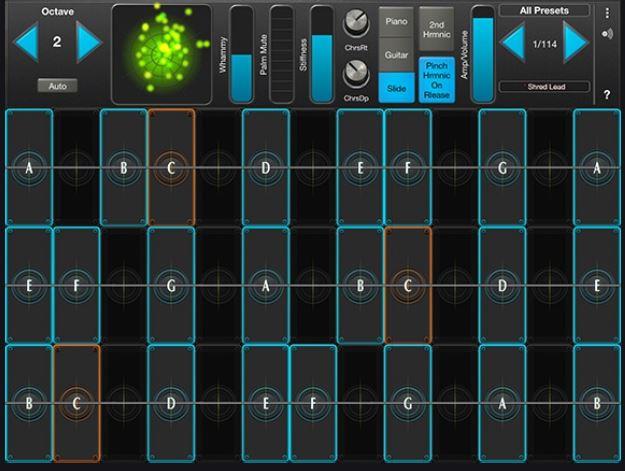 GeoShred is one of the first apps that can change the way you play a musical instrument on your iPad. It has physical modelling synthesis which is one of the reasons why this app is so powerful and real. This app has really shown that even iPad can be used to create powerful and interesting music. This multi-touch instrument gives you endless ways of following your creativity. This app is an iOS-only app. So, if you are an Android user you need to have an iPad to play this instrument. Guitarists can find this app even more intuitive because the basic modelling of this app is like a guitar. There are different pedals present which can be bent and different effects can be produced in that way. There is no doubt that once a musician plays this instrument he will like it to the fullest.
So, let's dive right into the playing surface of this instrument.

The playing surface is intuitive and easy to understand for a musician. Grids are present on the instrument which can be thought of as frets of a guitar. When you move to the right you go higher in the pitch. There are many such layers of grids (strings) which can help you go up and down to go even higher or lower in the pitch. The best thing is that you can change the tuning of the grids like you can have one layer of grid for one octave so that when you play a note right above the current the same note of the next octave will be played. Or if you are a guitarist you can customize the tuning according to different tuning conventions of guitar, like DADGAD. The name of the note is also displayed on the grids.
On the top of the instrument, you have a control surface which contains different buttons, sliders, a joystick and some other items. Let's take a look at some of the important ones of them.

Octave buttons: There are two triangular buttons on the top left corner of the instrument which can be used to move up or down an octave. There is also a button called Auto which is used in Pitch Intelligence which we will discuss below.

Whammy pedal: Whammy pedal can be used to make your instrument sound exactly like a guitar. What you have to do is just hold a note and move the whammy pedal. It will create some effect like bending the pitch on a guitar.

Patches: On the GeoShred you have the capability to change the instrument sound as well. There are around 114 patches in the instrument at the time of writing this article. The good thing is that each patch has a really different look to it. Some have less number of strings, some have more frets on one string and so on. You can even customize it to your liking. You can have many rows, one row, or just one note on the whole playing surface. That's the flexibility that GeoShred provides you. 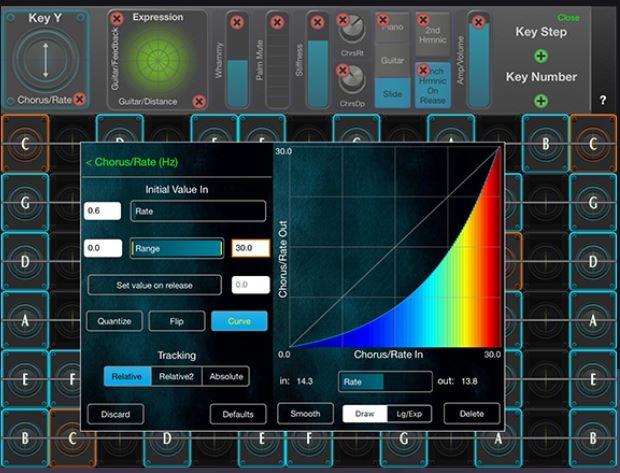 The graphics of GeoShred is awesome as well, although it does not reflect in your music output but it feels good to the eyes.

GeoShred is a completely innovative way of a musical app with lots of new features added to it. Jordan Rudess himself and some expert developers have put in a lot of effort in developing this amazing technology called Pitch Intelligence. So, let me explain to you some of the features of GeoShred.

Pitch Intelligence: There are basically two levels of Pitch Intelligence; pitch rounding and octave rounding.
First, let me talk to you about pitch rounding. GeoShred is basically a fretless instrument like a violin. But when you touch anywhere on the playing surface of the instrument, it will snap to a perfect diatonic note which is the center of a grid on the playing surface. Even if you are slightly right or left of the center of the grid (note), GeoShred will snap it to the center. But at the same time, you can move your finger to the left or right to bend between two notes. And when you stop after bending, it will magically snap to the center of the destination note as well. You can also do the vibrato by moving the finger left and right slightly. This technology has never been used in any musical app before.
Now let's talk about octave rounding. This technique is really cool. For enabling octave rounding, you have to turn the Auto button on in the octave section. Here, when you play a music/arpeggio the octave changes automatically. What technically happens is that whenever you try to jump to an interval that is a tritone (for example a perfect fifth) GeoShred picks the shorter distance. So, if you play the notes C,D,E,F,G and then again play the C on the same octave, GeoShred will automatically play the C in the next octave because it is the shorter distance from G. This technique can help you play interesting music and cool sounding arpeggios. It can also help you to play arpeggios fast because you don't have to move up or down the strings. You just need to play the same pattern again and again. 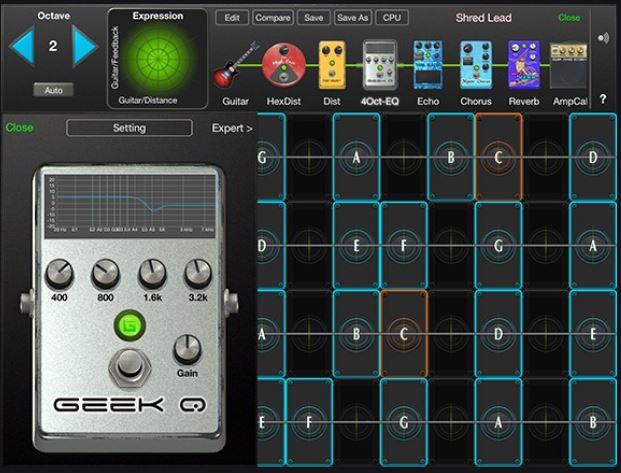 GeoShred uses physical modelling and thus you can produce real guitar sounds. You can even do interesting things like use the whammy pedal, or even produce the guitar feedback sounds.

Finger vibrato and slide: GeoShred is an extremely expressive instrument. You can do the vibrato effect by just moving your finger slightly left and right just like you do on a guitar. You can even slide from one note to other by just playing a note and moving your finger without lifting to the destination note. The slide feels like a fretless instrument which can bring more expression in your music.
I have not even mentioned all the features in the instrument. There are plenty of other things for you to experiment.

GeoShred is created by Wizdom Music and moForte Inc. It is based on physical modelling which is a new research. It is designed for iPad2 or above. The preset sounds present in the instrument are awesome. You also have the capability of creating your own preset by changing the properties of the sound and even choose from the sounds in the instrument. You can even share your preset with others. GeoShred is mostly like a guitar. So, you can control the mechanics of a guitar model like changing the body of the guitar from solid to hollow, nylon or metal strings. You can even change the pick position and the harmonics. Therefore, you have a lot of possibilities for your music. This instrument can also be used in live performance by connecting the audio out to the audio mixer.
All in all, GeoShred is a great instrument for musicians, especially guitarists. You should definitely try this amazing instrument. You can buy it from the iTunes. Hope this article was helpful. Happy musical journey.

In this article I will introduce you to some amazing applications in Android which you can use to create your own music fairly quickly. If you are already a musician you can tweak the minor details in your music and create just the music you want. So, read on to know more about these applications.