IFTTT - If This Then That - is an incredible service that lets you enjoy a lot of features like Twitter and One Drive from one place. Microsoft too has developed Flow on the similar lines. The app is meant to create automated workflow. And thus tool has been appropriately named Flow or more precisely Microsoft Flow.

What is Microsoft Flow?

Microsoft Flow is a centralised service meant to connect different services. Microsoft Flow will connect to services like Twitter, DropBox, Slack and many others. 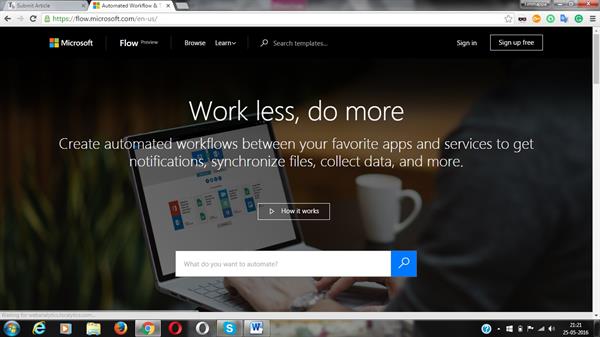 You can create workflows using Microsoft Flow. The application will take automatic actions as a response to some predefined occurrences. The service works in a similar way as IFTTT works. It automates all your tasks.
Microsoft has listed several actions on its website. The Microsoft Flow is available on a dedicated website flow.microsoft.com. It does support around thirty five (and still counting) services. Microsoft has promised to add more services every week.

The interface looks a bit old styled. The fluidity that you would expect from a new age app cannot be witnessed here. That could be because the service is still new and Microsoft is still working on it.

There are a few menu options that look old school. For instance, instead of double clicking a folder to open it, you will need to click on an arrow next to it. It appears to be more in tune with the Microsoft school of thought. But, it steals away the fluidity part.

Another annoying feature is the fact that you are forced to use the interface of the Flow app while connecting to any third party services. For example, if you connect to Google Drive, you will do so from within the app's interface. You will not be taken to the app's website. This can make you miss the familiar features you have always come to use on the respective service.

Another drawback I would consider would be the non availability of a separate dedicated application. You will need to work with the Microsoft Flow service in the form of web portal itself. There is no dedicated application. Besides, there is no provision of mobile app right now. Hopefully, Microsoft will give it a thought and consider coming up with a mobile app. Otherwise a big chunk of mobile users will feel alienated.

Microsoft Flow will support almost all major services. A list of 35+ services have been made available on the dedicated website. It will support both Microsoft services and other third party services. 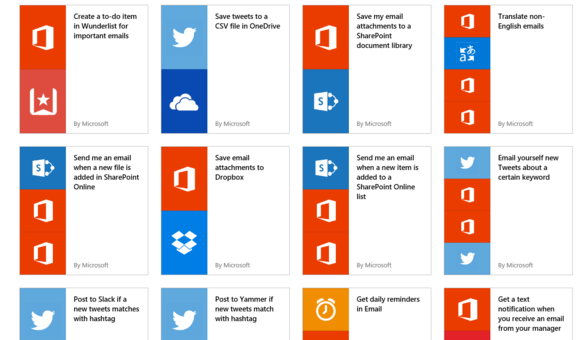 The website also lists a few "Flows" that you can create. Some of them are -
The above examples have been indicated with Slack as a reference. You can have several permutations and combinations of all the services you are going to use with Flow.

The way the flows are managed by Flow are a little confusing at the beginning. It could take some time to get around the concept and understand how the flows work. Microsoft needs to work a lot to be able to compete with IFTTT. For the beginning, Flow supports just around 35 services. It is quite paltry looking at around 300 services supported by IFTTT. However, Stephen Siciliano, Microsoft senior program manager from the "Microsoft Flow Team" has stated that

"We have connections to 35+ different services, including both Microsoft services like SharePoint, and public software services like Salesforce and Twitter, with more being added every week"

So, we can hope to see both the services being competitive in just under a couple of months.

Well, though the service currently appears to be in a state of infancy - you can expect it to be a great tool soon. It may take time to compete with the IFTTT. However, you can safely say Flow is better in functionality in comparison with IFTTT. It provides a deeper integration with the services that it supports. Apart from that, you can create multiple steps of flow. Agreed - IFTTT has established itself as the market leader, but Microsoft Flow has it in it to prove itself. It has the ability to work well with artificial intelligence and that is what would help you get the most out of it.

Microsoft Flow is still in its nascent stage. Yet, it has a lot of promising features. Though IFTTT is a big challenge, it has its plans up its sleeves. With the skills it has acquired over the years, Microsoft will not easily let it go off its hands. With the planned updates each week, we will definitely be in for a treat.