Streaming movies to your smartphone has been a favourite task for most of the smartphone users. The need is more concentrated in the southern region of the country which has a stronger movie culture. We have plenty of services to look for in the international genre. There is a huge list of great performers like Hotstar, NetFlix or Hooq. They have quite a good library and have an easy to use interface.
But, if you are the one looking out for regional content – you may have to find a better placed provider who has specialised content on offer. That is exactly the space FastFilmz is planning to cater to.

FastFilmz is a revolutionary idea that looks to change the way Mobile Videos are delivered in India. It aims to provide a high quality – yet compressed video files to your device even at low speeds.
Founded by Karam Malhotra and Dominic Charles, the startup is based in Bengaluru. Currently having a library of around 150 Tamil movies, the app has a user friendly interface. The best part that lets you vouch in favour of the app is the fact that it works even at slow internet speeds. The application has its main focus towards the tier 2 and tier 3 cities which do not have access to the high end technologies like WiFi and 3G (and now 4G). With an aim to tap into the potential of these smaller cities. FastFilmz has been into aligning compression technology and payment options in that direction. 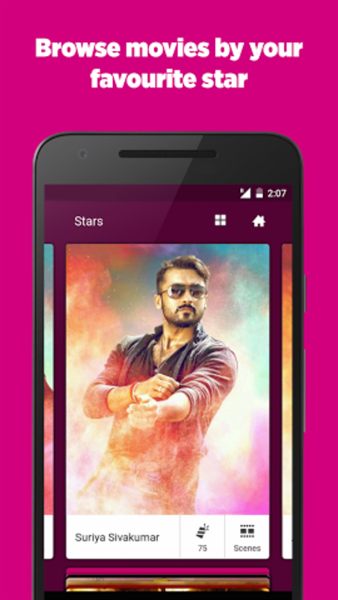 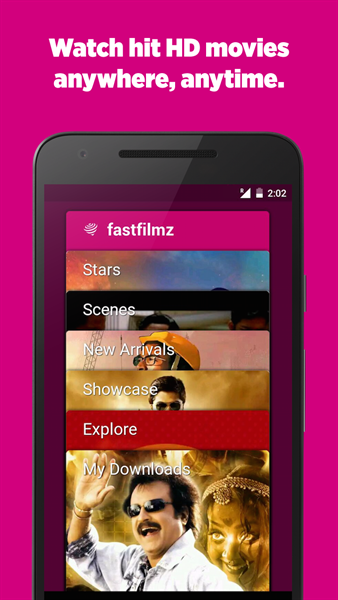 FastFilmz has its focus on the regional movies and it plans to cater to more Indian languages soon. Though it is a paid app, the subscription charges are quite on a lower side. The app supports carrier billing, and thus it would be more helpful for the rural movie fans who do not own cards.

How does the app work?

Well, as said before – the app has a very simple and easy to use interface. You can register yourself for the service just by giving a missed call to the prescribed number. Once you receive the OTP (One Time Password), enter it the space provided to verify your number and that's it! You are registered to the service.
The app has six main sections on the initial screen - Stars, Scenes, New Arrivals, Showcase, Explore, and My Downloads. The emphasis is – of course – on Stars. True to the movie culture in the South, the section has huge posters of the actors and a listing of their movies. The Scenes section lists out the popular scenes of a movie. If you are in the hurry and do not want to watch an entire movie, you can easily choose your favourite scenes here.
When you decide on a particular movie, you just need to tap on it. Doing so will bring up the synopsis of the movie and options for the quality of the download or streaming. You will be informed of the file size based on the quality you choose, so you may decide the suitable option based on your data and/or space issues.
On signing in for the app, you can benefit from a 14 day trial period. The best part - unlike other services of the similar nature – is that you do not have any restrictions on the usability during the trial period. You can stream or download unlimited movies during the trial period.

The application beats other apps in the genre with the sheer quality of performance on the 2G networks.
The developers have teamed up with a London based software firm, V-Nova for using their optimum video compression technology. Branded Perseus, the compression technology lets you stream quite a high quality of videos even on a slower 2G connection. FastFilms claims itself to be the

The audio and video quality of the streaming is quite reasonable in the low speed networks. It takes a little time to buffer initially, but once begun the streaming works quite smoothly. We would advice using a Medium setting for an optimum experience.

In fact, this should be one of the great features that the app comes with. In spite of being a paid model, the subscription charges are quite low – in fact, we must say abnormally low.
The standard subscription charges are Rs. 30 per month. But, wait – you need not commit yourself for a month. You can very well decide to subscribe on day basis – at Re. 1 per day. You may buy a 10 day pack at Rs. 10. So the pricing and subscription are completely flexible in nature.
There is no need to have a continued subscription. You can decide your course of action based purely on your needs. The service is truly unlimited and that lets you download or stream any number of movies no matter whether you are on a One day pack, a ten day subscription or a monthly subscription. There are no annoying advertisements either.
The service does support carrier billing. That would be another added advantage as you do not need to check out for a dealer for recharging the service or you would need to submit credit/debit card details. FastFilmz currently supports carrier billing on Aircel, Vodafone, AirTel and Idea.

Well, not exactly! The major concern this time around is the lack of many of the popular movies on the library. Given the huge strength of the Tamil movies, the library is quite abysmal. A few well known stars – for instance, Rajinikanth – has just under ten movies listed under him!
The developers are into acquiring more titles. They have plans of foraying into the Telugu filmdom in 2016. There are plans afoot to include more regional content. The library needs to have to be improved and FastFilmz has stated that they are working on it. Another good feature we would wish to see coming with the future updates is the introduction of sub titles. That would mean a movie buff who does not know the language can make use of the app.
The simpler user interface and good quality of streaming and downloads even at low speeds makes it our favourite app for viewing regional movies – especially, Tamil as of now. That coupled with the most affordable pricing should indeed be the reason for the popularity of the app. Crossing 5000 download mark in just over week of going live should speak of abilities.

FastFilmz is open to any kind of feedback you have for it. You can get in touch with them through any of the means below –

The app is available for Android as a free download on Google Play Store. iOS version of the app is under development and will soon make its appearance on app stores.

Though India boasts of having a deeper penetration of smartphones, there is not much use of the features within. Especially, movie streaming and downloads take a backseat – more so because of the high price of data packs, or the ridiculously snail like data speeds. FastFilmz is looking like a breeze of fresh air in the direction of making it quite easy and affordable to stream or download entire movie even with the slower 2G networks. The app looks promising as of now and we just hope to see the improvements suggested above. If you are one of those Tamil movie fans and want to have a look at how it feels on the app, head over to your app store and download FastFilmz now. After all, you are getting a 14 day truly unlimited trial period for free.