If you are on this page then you have obviously received the bad news of MixRadio shutting down. After 17 years of being in service first as Ovi Music, then Nokia Music and now finally MixRadio, it is time for this subscription service too just like many other music subscription services to buckle under the financial pressure of running a music streaming app. 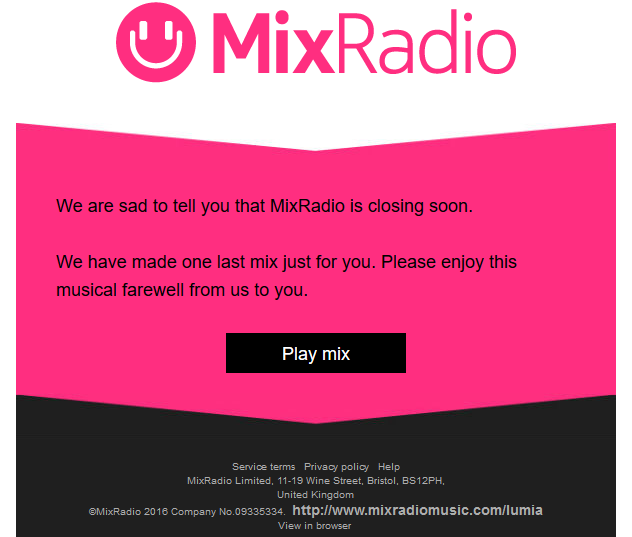 I was honestly caught unaware about this development till the time the update mail dropped in my email account. The app was pulled from app stores the previous month itself and now its the end time for this app. This latest update to MixRadio didn't bring any news about new feature, bug fix but rather brought the sad news of its demise after such a long run.

The current owner of the service, Japanese firm Line has hinted towards financials issues as the reason for closing down the service

"After a careful assessment of the subsidiary's overall performance, the financial challenges posed by the music streaming market, and priorities of LINE Corporation, LINE has determined that future growth would be difficult to ensure and decided to discontinue the MixRadio music streaming service."

MixRadio started off as an exclusive Windows app in 2007 when Nokia was acquired by Microsoft and the app was found to be as per-requisites. Later the app was released to iOS and Android users on 19th May, 2015 shortly after being acquired by Line. It was downloaded 5 million times by Android users and reached the most downloaded app milestone in Indonesia on Google Play with 1 million downloads.

MixRadio along with Maps has been a default app since Windows 8 phones till the Lumia 540. It is quite disheartening to see such a cool app close down. Our hearts go out with all the employees and users of MixRadio who like me will miss MixRadio app a lot.

This article provides information on the many functions of Cortana, the Microsoft digital assistant available on Window 8.1 OS smartphones.

Fresh paint application will help its users to be creative and add different colors to their imagination. The application is very easy to use and kids are going to love this painting work.

As we all are aware of the Windows 8 mobile phones which are becoming the choice of everyone. In this article we will tell some News Applications of Windows 8.x mobile phones. Hope you will like them all.

Unlike Android devices, you'd find that Windows phones drain a lot of battery. The reason could be the graphics heavy operating system that requires more CPU and battery resource. In such case you can optimize your battery performance by using Battery Saver Apps. In this article, we discuss some of the efficient battery saving apps for Windows 10 phone.

I had grown fond of this service. Sad enough, the service is shutting down. I guess it is the lobby in music streaming services that has forced the provider to terminate the services. I remember Samsung launching Club Samsung a few months ago and it was subsequently shut down within a couple of months.