The solid waste management scenario in Indian cities is far worse than what it appears. Most of the waste is disposed off in open lands. A staggering over 90 per cent of the solid waste is disposed thus. Such indiscriminate disposal results in several issues including fire hazards. There have been instances in the past where the garbage piles catches fire and fills the surrounding area in dense smog.

Kabadiwala Connect is a unique initiative in minimising these sorts of eventualities. Let us check out how does this model work.

The Kabadiwalas have long been an important component of a proper waste management plan in India. They are the self appointed scavengers and collect a huge part of the garbage generated. According to an estimate, close to 33 per cent of the solid waste is collected by the Kabadiwalas. A large number of these Kabadiwalas have an income of around Rs. 25000 a month.

The Kabadiwala Connect InitiativeKabadiwala connect is an innovative platform that aims at connecting the citizens of the city to the nearest Kabadiwala. The firm is based in Chennai and currently operates in the city itself. It has an online listing of around 800 Kabadiwalas in Chennai. 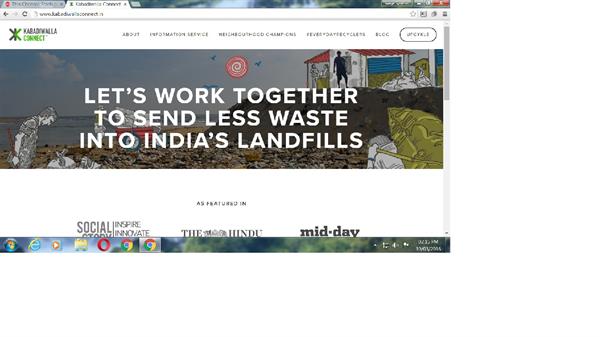 The startup works on a map based interface. It marks the the location of waste collectors aka Kabadiwalas on this map. The list comprises of the contact details, photos and the material they collect. Members of the general public can look up for a Kabadiwala at a location near them. The Kabadiwalas visit their location and collect the waste for recycling.

How do they work?

The Kabadiwala Connect was founded by Siddharth Hande, Sonaal Bangera and Rishi Shridhar. Hande takes care of product and design, while Sonaal works on the responsibility of business. Rishi takes care of strategy planning. The firm has eight full time staff apart from the founders.

The startup has a mobile app based business model wherein the Kabadiwalas report when they have recyclable waste to sell. The firm works as a buying hub by selling it at a good profit thereby helping the Kabadiwalas earn more. As Hande says,

" We've hired a godown, and are now piloting kabadiwallahs using the app, who are reporting to us, and we're organising collection based on their data, sending it to the godown, segregating, shredding, and selling to a processor".

How do they make profit?

Hande states that there are enough growth prospects in this hitherto untapped area. According to him, they will be launching an MVP - Minimum Value Product - in April, 2016. They have already enrolled the Kabadiwalas ( they have a 25+ and the number is increasing), hired the godowns and buying shredders.

The startup has been on the hunt for fund raising. It plans to map the entire Chennai city and then branch out to other cities as well. As Hande says,

"We... investor from Saudi Arabia who is very interested in bringing this to the Middle East and North Africa region, ...because the technology we've built is scalable"

The mobile based waste collection service has been planned for a launch in April. To encourage the local Kabadiwalas, the company has plans of offering small incentives like mobile top ups.

Any other initiatives of similar nature?

Well, there have been a few startups working on the concepts. Encashea in Bengaluru and Pom Pom in Delhi have mobile apps that let you get the waste collected from home. Karma Recycling has been involved in disposal of e-waste. I got Garbage by MindTree in Bengaluru had rag pickers employed as recyclers.

Well, it has been a good venture, and a true philanthropic initiative at that. From the consumer point of view, it helps them get the waste collected fro their location. The GPS based search for the neighbourhood Kabadiwala can be a real boon. Do our readers have any such ideas that can make our cities and localities garbage free? Sharing your thoughts will definitely be helpful in brainstorming and launch of several such initiatives.

Recycling industry is due disruption for decades. There is a lot of things that needs to be changed there. Startups such as these can be really useful.There may not be profit initially for such projects but with some sponsors and better implementation of recycled products this can be a good project. I think plastic recycling can be on area for improvement which can be the focus in future.

Certainly. Kabadiwala Connect is trying to expand its business model to other cities. The fact that it is going beyond the Indian boundaries is indicative of the success formula involved in the concept.
Yes, it is evident that the startup is not into making profit. It just has been trying to workout the working capital. They are currently into fund raising hunt. Hopefully, we will be able to find more of its work in adjoinjng cities.

That is indeed a commendable initiative. I think, the platform should reach every corner of this country. When Waste management system is now taking a shape, it is high time for such initiatives to come forward with their helping hand. The Swachh Bharat program can club with such a concept to handle the issue of wastage and littering better.

That's indeed a great idea. Collaboration of government bodies with such green initiatives will go a long way in making our Bharat really Swachh.

I wonder what will be the profit margin for them? The cost of handling and manpower will be huge I think.

Those initiatives not necessarily aim at a high profit. These kind of startups work with a dual mission of profitability and social service.
Having said that, one must not forget that there is plenty of money in what we think scrap. Mobile phones, for instance can be a rich source of recycled precious metals. It may be astonishing to know that a ton of old mobile phones provide you around 300 pounds of copper!