What is the price of cheapest yet functional smartphone you have ever imagined? Rs. 5000, maybe - right? We are about to witness an incredibly low priced smartphone on 18th February. The Freedom 251 is priced at Rs. 251. And mind you, it is not just the cheapest device out there. If the information available is reliable, it is the fully functional smartphone! Affordable. yet feature laden, it is definitely going to change the face of Indian smartphone industry. 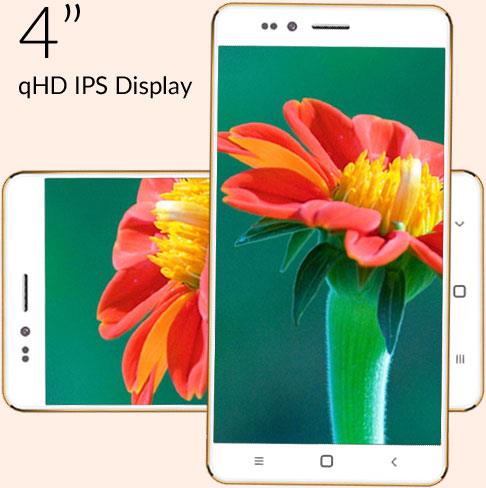 The Freedom 251 will be featuring a 4 inch IPS display. The resolution of the screen is 960 x 540 pixels. Do not expect any extraordinary features with the display or viewing angles here. However, I would expect a good quality in line with the price.
As for innards, the smartphone is powered by a quad core processor. the clock speed of the device has been stated to be 1.3 GHz. It indeed is impressive given the price. The processor make has not been specified. The device will come with 1 GB onboard RAM which should be enough for simple day to day tasks. The internal memory of the phone will be a good 8 GB. It also comes with a memory expansion option via micro SD card. You can extend the memory by another 32 GB.
Freedom 251 carries a 3.2 MP rear camera and a 0.3 MP front snapper. There isn't anything fancy with the camera set up. It is just for basic use. The camera is said to have Touchless Technology that lets you have great selfies.

The smartphone runs on Android Lollipop 5.1 out of the box. The company claims that they have not compromised anything on the software front. The device comes with the Google Play Store and WhatsApp preinstalled. There are also several other apps like YouTube and Facebook. There are several government apps like Swachh Bharat. The Freedom 251 also has several apps useful for farmers, fishermen and women.
The battery capacity of the device reads 1450 mAh. The phone will also offer 3G connectivity at the incredible price.

The Freedom 251 is manufactured by a hitherto lesser known company, Ringing Bells. It was founded in 2015. They have so far released four smartphones.
The firm has stated that the phone has been manufactured under the support from Make In India campaign by Government of India.
Ringing Bells claims that it wants to

"Empower citizens, even in the remotest rural and semi-urban centres of India, with the latest in digital technology at incredible affordable prices and cascade knowledge, news and current issues so that all experience the confidence of inclusive growth and equal opportunity"

The firm is definitely not a fly by night operator. It is based at NOIDA. They have also released a 4G smartphone named Smart 101. The company has an in-house testing facility.

The Freedom 251 will come with one year manufacturer warranty. Ringing Bells has set up 650 service centres across the country. The warranty of 12 months will be available on the device and 6 months on the accessories. Ringing Bells has stated that liquid spillage and physical abuse will not be covered.

The Freedom 251 will be officially launched on 17th February in New Delhi by Defence Minister Mr. Manohar Parrikar. That makes it evident that the project has been supported by Government of India.
The registrations will commence from February 18 at 6.00 am and will run till February 21 at 8.00 pm. The deliveries will be completed by June, 30 - 2016. Head on to their website to register. Visit http://www.freedom251.com for more details.

Well, as far as the price is concerned, nothing beats Freedom 251. The lowest smartphones currently are available at a price above Rs. 4000. Lenovo A 2010 and Karbonn Machone are the ones available at the lowest price band right now. But Freedom 251 beats them almost on all counts.
It is better than Lenovo A2010 with a pixel density of 276 ppi. Though the screen size is the lowest among the three, it sits between the two. All the three devices have 1 GB of RAM. Lenovo A 2010 has a 1.3 GHz processor, while Karbonn comes with 1 GHz. Even the software remains the same across all the three.
It's only with the camera department that both Lenovo and Karbonn beat Freedom 251. The manufacturer had to cut costs somewhere and that's exactly what they have done with the camera. We may need to wait to check the performance in the real world to ascertain the real winner, yet the new smartphone at the cost of a screen protector has really made the biggies run for their money.

In fact, it is a welcome gesture and will be a big boost for the Digital India campaign by PM Modi. At such an ridiculously impressive price for the functionality on offer, it should be a major step towards connecting India. The smartphone, if it succeeds in capturing the market, will be a poster boy for Prime Minister's ambitious Digital India campaign. Hopefully, the device will live up to the expectations of the general public.

An update here - the site could not handle the unprecedented hits amounting to 6 lakhs per second ( that's the estimate provided by site itself). It has crashed and a service upgrade is underway. The site has claimed that they will be back within 24 hours or before.

The disadvantages of this device will be that no one will be going to repair it. The e-Waste generated will be a problem for people as well as for government too. I do not believe such cheap phone will survive into the market on both technological aspects or e waste matter.

That was indeed a good find. I agree with your view that no one will bother to get it repaired if something goes wrong. The cost of repair would - in fact be more than what you have spent on it.
But even before that I have strong apprehensions about the actual functionality of the phone. The models available for the press at the launch were not the actual phones, but those from AdCom or such other manufacturer. They do not even have a prototype at the time of launch!. Moreover, the big question remains about the BIS certification which is mandatory.
Right now, it seems to be a wait and see game.