Windows by default doesn't offer a way to stream the photofeeds on desktop. In such case using the external apps to rotate the background with photo feeds is the only option. In this article we are going to check out some of the apps that allows you to change wallpapers on Windows 10 desktop. I am restricting the discussion to only freeware applications only. 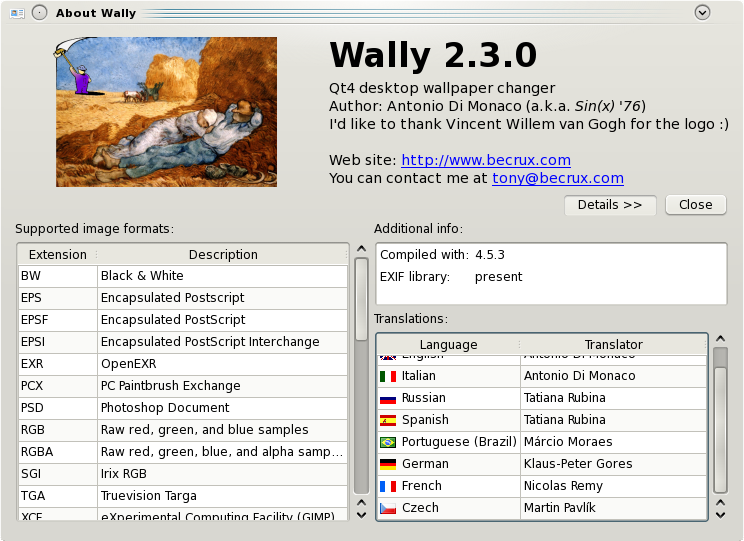 This application is written in a QT framework and so it is available for different operating systems. The application is capable of fetching the wallpapers from multiple feeds. You can also use the app to set the time in which you want to rotate the wallpaper. Setting the position of the wallpaper and the adjusting the gradient is also easier compared to other apps. When you read the wallpapers from the external sources, you get the option to either stream them or store them on your hard drive. If any wallpaper source requires you to be on specific region, then using the Proxy support you can access the content. The application is free of cost and you don't have to pay for any features or up-sells in order to use the app.

This program is in development since early 2000. It is available for multiple versions of Windows and Mac OS. The app has only single effective feature, to rotate the background at the time period specified by you. It can grab the photo feeds from various sources such as Flickr, Google photos, Facebook and other wallpaper sites. You can also use the app to present the photos in different views e.g. collage view etc. You can also customize gradient, transparency and rotation. This makes the app easy to use and less complicated for feed streaming. The best part of this app is the cost : Free. And it doesn't even add any adware or opencandy into the installer.

This app is available in free and professional version. It doesn't cost much money for the pro version either. So it all depends on your usage and how much of such app you need on everyday basis. The app lets you set the rotation time with which you can change the wallpaper. You can also get the photo feeds from online source. It also lets you store the photos on the hard drive. Another interesting feature of the app is it lets you set the view in which you want to view wallpaper. You can set the photo as stretched or collage etc. I personally found the software easy to use and navigate though I can't justify why someone would need to use Pro version.

Earlier this app used to have the calendar built into it. However it doesn't have the calendar option for the version released recently. Wallpaper source can be anything from local folder to online photo RSS feed. Depending on how you want the images to be rotated, you can set the options accordingly. You can also make the frame around wallpaper to make it look cool. It also allows you change the style in which you change the icons. The program remains silent after startup and stays in the tray. You can also remove the startup option and use it only when you need it.
You may not like the user interface of this program but for simple wallpaper changing task, it can get that done without any issues.

The app interface is good and easy to learn for setting the background rotation. You can change a lot of options while rotating the images. You can set the background in collage or with calendar as well. You can make use of calendar system to show the notes and tasks on desktop. If you have photo feeds then you can add them on the source. This way you can get new images from those sources. It also lets you set the order for each feed and this makes it easy to shuffle in between the image sources.

This app isn't complex and focuses on one thing - change the wallpaper. So it let's you set the frequency in which you can change the images. You can also sort the images in particular order. You can also set the image view for individual images. You can even set which image to exclude from next rotation. However app doesn't have advanced features such as auto close and image info for streamed images. So that makes this app usable for simple use only. If you want background changing app with more complex feature set then you have to try other apps listed earlier in the article.

There are many other wallpaper changer apps that you can use on Windows 10. Most of the free apps these days can get you some advanced features. However these apps are only good if you have enough good images stored on desktop. It is better to find out the photo feeds on the web while using such apps. This way you'd get enough new wallpaper being changed on every day basis.

When Windows deletes a file, the traces of the file remain in the background process and hard drive. You may find that such files can be recovered using file recovery apps. In such scenarios only file shredding apps can be used to make such remnants less readable. File shredding apps are useful when you want to remove sensitive information. In this article we are going to discuss some File Shredder apps for Windows.

Websites with dynamic content change pretty quickly and it's hard to keep a tab on small changes in them. There are some of the website change monitoring apps that can do this job for you. Such apps can help you not only to monitor new changes but also to show which part of the page is changed. In this article, we review website monitoring apps for Windows.

FM Radio default app has been removed from the Windows developer build. And in order to use this functionality, the usage of third party apps is encouraged. If you are affected with this new change of Windows mobile development update, then keep reading. In this article, we review some of the good FM Radio apps for Windows 10 mobile.