If your daily work involves lot of tasks, reminders and to-do lists then using a sticky note can be a good option. Windows operating system has plenty of apps that help you create a sticky notes on your desktop. You can also use the app for reminder and to-do lists. Most of them also allow you to sync the app with cloud services like Dropbox. Let's check out some of the freeware sticky notes applications to use on Windows 10.

Stickies is a simple application written to replace the yellow sticky notes in a paper format. It can be used in both installer as well as portable mode. You may find that the stickies can remain active even after the reboot. So the program hosts itself as a startup item and keeps history of active stickies. It can store text or image attachments within and you may easily access the content. It has lot of features that you can use to customize, such as customizing color, fonts and reminders. You can also use it to sync with the cloud services. I found that the level of complexity makes it harder for normal users to use. However if you just want to use the stickies for a simple usage then you can do so without having to go through all the feature bloat. 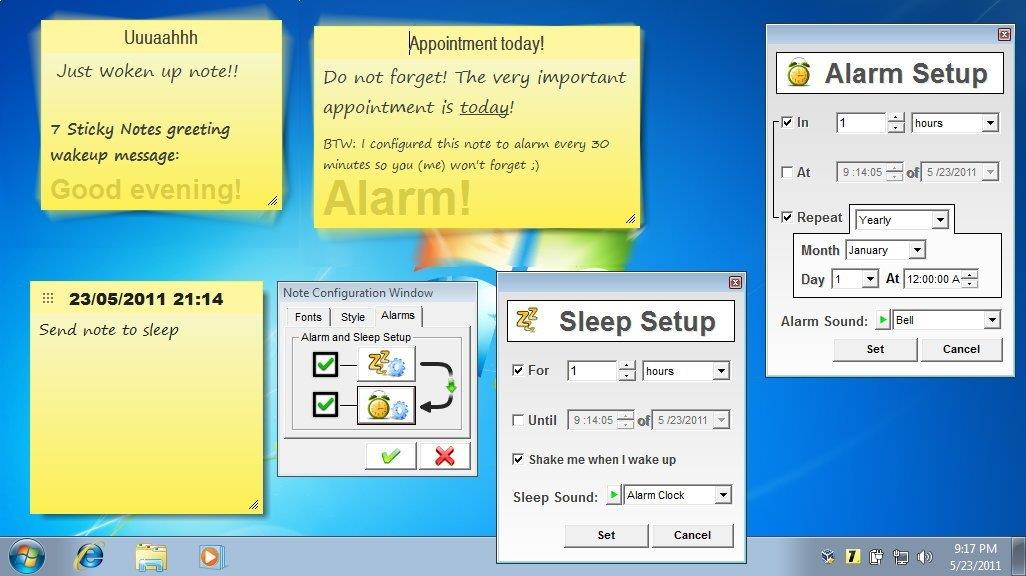 This app is simple yet effective desktop notes program. It is free of cost and is available in both portable and installer option. So you are not locked to a single computer for your notes. The app is small in size as it doesn't require .NET framework and so the dependencies are relatively less in number. You can use it to customize the notes color, font and the content as well. It has some interesting advanced features such as - transparency, reminders, to-do list and note searching. It also includes sync feature with online cloud websites. So you can even store the sticky notes data in the cloud. There are few limitations however, which include not able to create many notes on the system.

The app is available in both installer and portable format. You can install the portable app without having to run the installer. This way you can take your notes with you on any computer that you share or frequently change. The settings of the portable app are stored in the same directory so you don't have to worry about data sensitivity issues. The app can be used take notes, print them, you can stick the notes on desktop, set reminders and also search the notes. The app also pays more attention towards the UI and the shadow effects. The app is free of cost to download and you can also get auto-update from the app itself. The recent version has been tested on the Windows 10 so you can use this app without any compatibility issues. It takes time to get used to this app but once you learn how to use it, you won't need any other app for sticky notes. 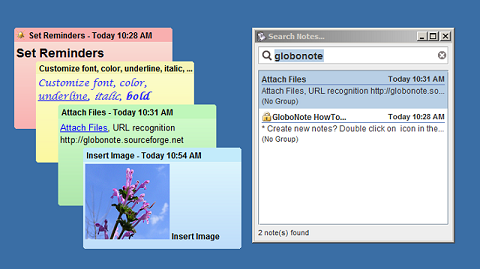 Globonotes allows you to create sticky notes, to-do lists, personal journals and reminders. In short, the app offers multiple usage options from single app. I personally find this app useful for not only the stickies but also for reminders and to-do lists. There are no limits on how many sticky you use and only limit would be your monitor screen-space. For those with multiple monitors will find this app really helpful. User interface is easy to learn through for creating sticky notes. You can create notes and set their position on the desktop. You can also change colors and font of the notes. If you want to attach images for better reminder then you can do so. You can use sticky notes as a reminder and delete then after specific time period. You can also search the sticky notes through the app interface. This application is cross platform, works with - Windows, Linux and Mac OSX. It is free to download the app from SourceForge and the development is active. So you can rest assured that you're not using any adbandonware app on your Windows 10. I personally prefer this app due to simplicity and the features that are offered. 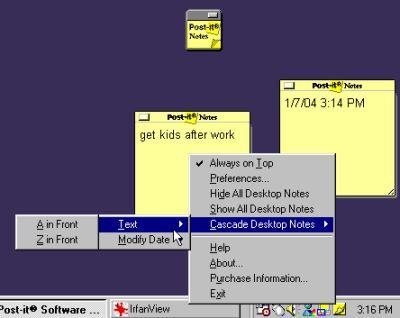 This app is simple to use and it is quite effective. Yet to be tested for working under Windows 10. However you can run the app from compatibility mode. It should let you put the notes on the screen. And the notes can be placed on top of any window. You can also put the notes as a sticky reminder in the tray. The tray option has more features in the professional version. However the lite version is more than enough for the basic needs. The software is no longer under development. This software was developed by the official Post-it company and they supported both lite and pro version for some time until the demand reduced. Now the software is no longer be accessible from their official website. You have to access the app from websites like softpedia or Tucows. Most of such downloader websites are likely to have the app in collection.

There are many premium and freeware Sticky notes available for Windows platform. Depending how much flexibility and feature sets you want, you can use the above listed apps. Most of the freewares listed above are more than enough for the regular personal usage.