Windows default uninstaller often doesn't completely removes the program from the disk. It leaves some of the directories and orphan files behind. This often creates issues when you wish to update or repair some programs. In order to handle such issues, there are some uninstaller programs out there. In this article, I am listing some of the freeware un-installation apps that you can use on Windows 10.

I personally prefer to use this app due to it's simplicity and effective operation. You can run the program as a standalone as well as installed program. It can remove the leftover files and registry entries. If any installation is failed and you have some leftover files then Revo Uninstaller can remove the files. Sometimes the app however takes a bit of time while deleting the files. It also sometimes removes the wrong dependencies. But that happens mostly for programs such as Visual studio. If you can instead use Visual studio's uninstaller then you may not face that issue. The app is small in size but it is capable of performing some serious operations on system. It is freeware for basic usage and advanced features are set for the premium version. So the free usage is limited to personal or the limited user workplaces. Business users and the commercial users are supposed to buy the premium version. 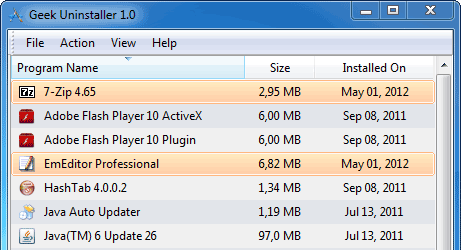 Most of the uninstaller programs leave a lot of leftovers on your disk. Geekuninstaller not only removes such files but also make sure that the program is completely uninstalled. If you are having issues with context menu entries after uninstall, then you should definitely use this program. The program is quick to execute and gets your program uninstalled without any issues. You can run the program in a portable way across multiple machines. The program also supports 64 bit operating system and you will find the similar performance across the system. It also supports multiple languages and adapts to the system language. The program is freeware and you don't have any restriction while using the program. 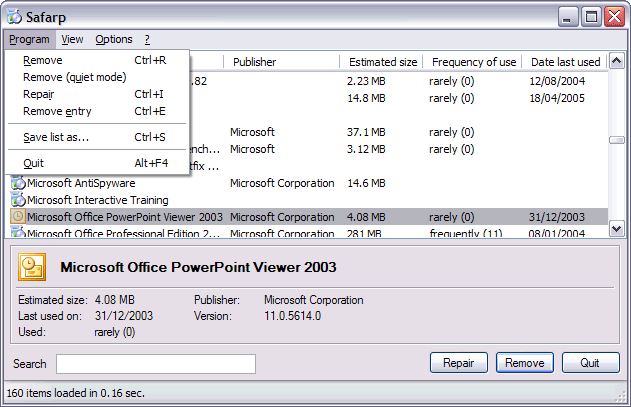 Control panel's uninstaller looks good but it is slow for installation and un-installation of programs. Safarp makes it easy for you to load the programs quickly and uninstall them on the fly. The app is small in size and loads pretty quickly. It also helps you to remove the files from disk as you uninstall. The user interface of the app looks similar to the Adept software. Just like Windows Add or Remove programs option, you can use this to remove the content of apps and also repair them. The program is free to download and you have no restrictions or nag screen. It can run on it's own as a portable app or you can install it on your hard drive.

MyUninstaller runs the uninstaller option provided by the apps that is installed on your system. If there is no uninstall option for the app, then it makes use of the default system uninstall. This way it can get rid of the residual files on the system. It doesn't clear the registry entries however, you can always make use of registry cleaner for that operation. It is full replacement of your existing add remove programs app from Windows. Compared to other uninstallers, this app doesn't offer you much of the advanced features. It only offers simplicity and the mode in which you can easily manage the app to uninstall the other apps.

This app not only removes the other applications but also keeps an eye on the installation. This way it remembers which files need to be removed later. This method surely helps keep get the bloat out of the computer during un-installation. In order for the app to remember the install, it needs to be directed at first. Once it gets the idea of which software is about to install, then it keeps eye on the files that are transferred. It can remove all the orphan files and settings after un-installation. The cleanup done by the app is more effective and can be used for regular cleanup before defragment. The app is free of cost and is suitable for the users who want more advanced controls over uninstallation process.

Apar from being a disk cleanup and registry cleaner, the app also offers Un-installation support for the apps. It is however doesn't keep track of all the files during un-installation. So you have to remove the orphan files and registry entries later using the same utility. I'd say this app is good enough for those who want all the solutions in one app and don't want different apps for different reasons. CCleaner isn't a good option for the people who want more advanced control over their files and installation.

Revo Uninstaller has always been my favourite. Though I am not using Windows 10 - I'm still on Windows 7 - yet whenever I want to uninstall any application, I never do it with the regular way through control panel. Revo removes everything - including the residual files. Once the app is gone, I make sure everything is clean by running the CCleaner.

Earlier I used Revo and JV16 cleaner. However as the JV16 turned premium program, I have now switched to Revo and CCleaner combo.