Messaging has been the new word for communication. That is the reason why IMs or instant messenger apps have been mushrooming out of nowhere. Among the big names like the ubiquitous WhatsApp, Indian startup Hike and the infamous Facebook Messenger - there is one new app named Wire. It promises to be a completely different from the lot. Though it could be too early to expect Wire to take on the big players, it is quite promising in the initial days of usage. 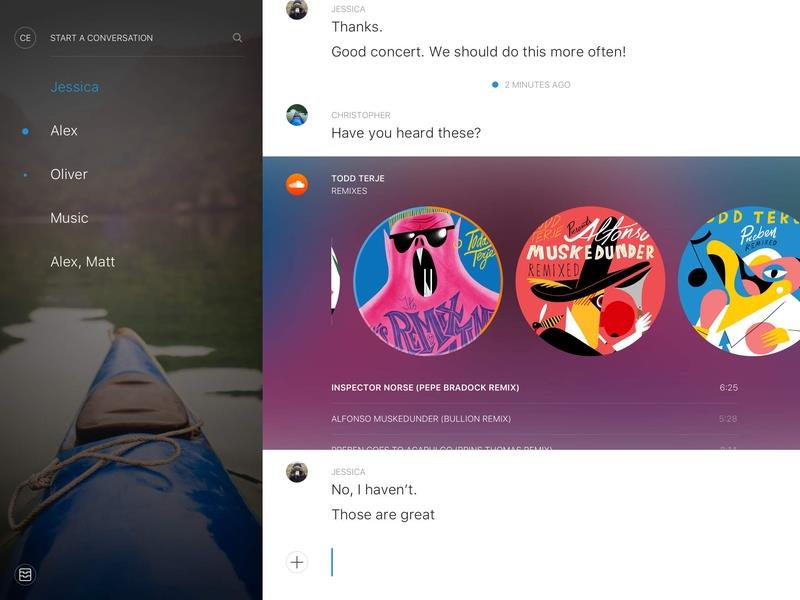 Wire is the new messaging app on the block. Released by Skype, it is presenting itself as the app for next generation. Put together by Janus Friis, co-founder of Skype and his team which includes a number of Skype developers, the app completed beta testing a year ago in December, 2014. It lets you send text messages, images and small files. It also supports call functionality. The initial reports have suggested that the app has great audio quality.

Well, it does work on the similar lines as other messaging apps. You need your mobile number or email address to sign up with the service. There are times when the verification message comes too late. If you face such an issue, you can sign up on their website using your email address.

The uploading of images and files is much easier than expected. You can ping your contacts to make sure they have read your message.

Wire excels in its simple non-clunky interface. It uses your phone contacts to populate the chats. The design is indeed a gem in terms of user support. The minimalistic approach to the design has softer lines and neat avatars. Every user can create his/her own interface style. This is what makes Wire stand apart from rest of the apps.

The app is lightweight and not much heavy on resources. It does load fast enough.

Wire is quite snappy in its performance. In fact, it tends to put WhatsApp to shame in terms of snappiness. The Web interface has the similar features as on the mobile app and works just great.

The calling feature works on expected lines as well. It does work quite effectively even on 2G networks. However, too slow network can create havoc with downloading files. Please note that this is not an enterprise oriented app.

The app supports synchronisation across different devices. No matter on which device you are accessing the app, the message will be delivered to all of them simultaneously. The battery consumption has been observed to be quite efficient. It does not consume much battery in comparison to the competitors.

The application works quite well if the connection is fast enough. As said before, it has been observed to offer a good performance under slow speed 2G network.

Anything to worry about?

Well, there are bugs that may annoy you. Especially, when you are used to the bug free performance of the existing players in the instant messengers genre.

One such issue is as has been stated above. If you register using your device and mobile number, you may end up waiting for the verification SMS to arrive. At times it takes two hours to get the SMS! It could be the result of initial hiccups, and hopefully it will be resolved soon. As an alternative, you can register on the website using your email ID.

The biggest annoyance comes in the form of persistent request to upload a profile image. Unless you set up an image as the profile picture, you will not be able to use the app, or send messages.

You have profile pages, but some users have reported difficulty in setting it up during the initial days if the release of the app. We are just hoping to see the bugs being resolved soon with the future updates.

The performance needs still a little polish. One of the annoying aspect is if you read a chat on a particular device, the message notification stays on another one. We wish it would synchronise the read messages across all devices like in the case of other messaging apps out there.

Wire holds promise for the users. It is completely free of charge as of now. There are no plans to monetise it either. It can be used to include your contacts and use as a alternative messenger on your smartphone. But, with most of your contacts already using WhatsApp and Facebook Messenger, it needs to be seen how Wire takes on the mightiest in messaging arena. It could be too early to predict the fate of the new app. Let us wait and watch how it works its way up.

Franz - Single app for all your instant messengers -A review

Our life – both professional and personal – revolves around social media networks. Having so many apps and web tools for managing this huge list of accounts can be really harrowing. Don't worry – there is a new tool on the horizon to help you manage all your online accounts in a single application. We will analyse the Franz app in this article.

Google made announcement of two new apps in this years I/O 2016 conference. The two apps are namely - Duo and Allo. The Allo is a messaging app which focuses on security and privacy of the messaging. The apps will be available later this year after it finishes beta tests. In this review we discuss some of the features of the Allo app.

How to turn on Dark mode in WhatsApp on Android

How to stop people from adding you to the WhatsApp Groups?

How to Use WhatsApp on web?

So far, WhatsApp has been suffering a limitation. Users who wished to access it on their desktop had no official options. Now, WhatsApp has come up with a new web client. Let me describe the steps needed to configure the messenger on your desktop.