Amazon has released a new App store offering around 471 free apps and games. The app is free to download and offers both free and premium apps for users. This is the second most popular Android app store with large number of apps hosted. Underground claims to offer free versions of premium apps on their platform so there would be no nagging popups and in-app purchases to go through. Content creators will make money from app installs and consumers won't have to worry about paying for individual apps.

You can install the app by going to: https://www.amazon.com/underground. You have to enter your phone number or email and the system will send the installer link to you. From here you can download the app .apk file on your phone. Once you download Amazon_App.apk, then you can go ahead and let the installer do the work. 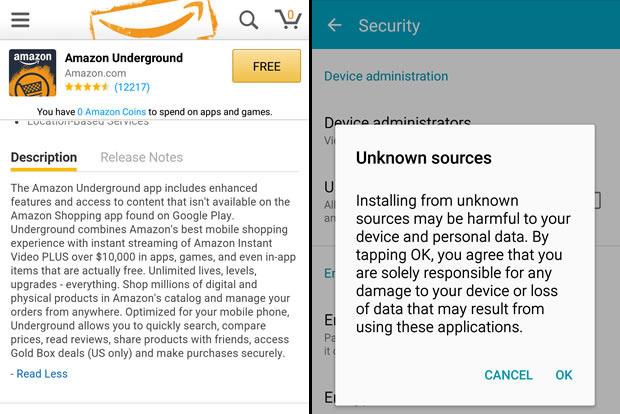 You don't have to pay or do anything for further steps. Once you open the app, all you have to do is enter your Amazon credentials so you can map your phone with Amazon account. If you are from India then the app will make you redirect the country. In order to access Underground, you have to change the country to United States. Once you change the country, you get the option of "Underground Apps" in the menu itself.

What do you get with this app

Primary focus is on the content such as - Games, Music, Video and Content Feeds. So if your app is making use of one of the content streams then surely you can develop for Amazon App store. If you are consumer then expect both free and premium version of apps to download through the store. 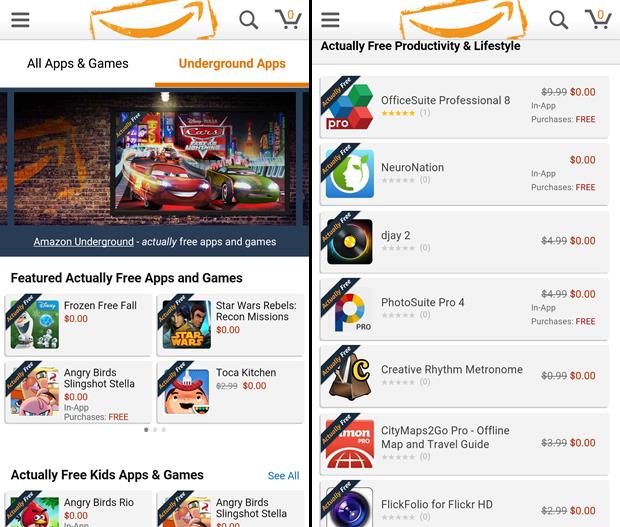 Here are some of the games that you can download from Underground: Star wars, Fruit ninja, Angry Birds Space etc. You can also download books and comics like - Charlie Brown Comics, Peanuts etc. You can expect more content by the second quarter of next year.

Is it worth downloading the app?

If you can't spend money on apps and books then Underground App can be a good source for you to consume content. It also has some of the interesting popular free games and learning apps. For most of the consumers such apps are more than enough for their needs. As Amazon is encouraging the App developers to publish for them, in future this platform is likely to earn more money for the app developers.

Why Amazon Underground is Free?

Amazon Underground is free because Amazon wants paying customers to stay on their platform. So they are making use of free content from Android store and using that content to get the customers. By offering free content, the customers are likely to stay longer on Amazon. The Freemium approach has worked earlier for Amazon when they offered Kindle reading via Unlimited program. Kindle Unlimited program not only helped book authors but also helped Amazon have more customers on their platform.

Developers who are making apps for Android Store can submit the apps only if their app is not subscription based. This way the developers immediately get their app approved. Though earlier releases are less likely to make consistent money. As this app captures more markets, the valuation that comes from the shared pool of creators will be more along the line.

At the time of writing this article, the App is yet to get any support in India. So you can expect the app to get into the Indian market by the end of the second quarter of 2016. And this app is likely to have some regional channels through which the content will be served. There are many small technical aspects yet to be executed on the India version of Amazon's business. So I am suspecting that this app too will be delayed unless the App creators are compensated for this region.

Amazon Underground is going to be a bigger marketplace where consumers and content developers both benefit from the deal. Mostly developers are going to get paid less but their content consumption from users will be more. And more consumption increases their earnings and keeps the users on Amazon. If you are a consumer trying to consume content by paying less then you benefit from such a deal.