Blender is probably the best open source 3D graphics software on the planet. It is suitable for indie graphics developers and small studios. It has the power to create virtually anything in the 3D domain. There are a plethora of tools in the latest release of Blender for 3D tasks like modeling, sculpting, rigging, simulation, rendering, compositing, motion tracking, video editing and game creation. For the advanced programmers and 3D enthusiasts it has got capabilities for injecting Python scripts to make automated tasks much simpler and efficient most of which are added to the future releases Blender. Since Blender is open source you can easily download the source code of this software and tweak it according to your needs if you are hardcore programmer. Enough of introduction, let's dive straight into the features of the this software. 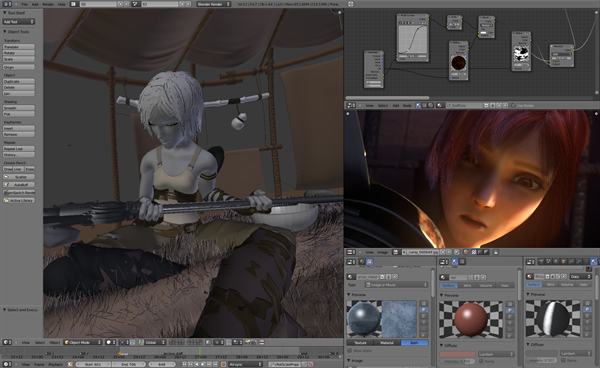 These are the features of Blender.

Blender is cross platform which will help users of different operating systems to use it to the fullest. Currently Blender supports Windows, OS X, Linux and FreeBSD which are the most popular operating systems of all time. Since it is written in C, C++ and Python, it can use most of the hardware architecture efficiently.

Blender now offers a powerful rendering engine called Cycles. It provides ultra-realistic rendering. Cycles offers realtime viewport preview which shows you the rendered image right on the viewport which helps you to save time by not having to render multiple times. It also offers GPU and CPU rendering which utilizes the power of CPU and Graphics card together to make the rendering process even more efficient. It also support HDR lighting for more enhanced video output altogether.

There are many capabilities of Blender modeling tool. It has keyboard shortcuts for pretty much anything in modeling for fast modeling. It also supports N-Gon which can be useful when working with shapes like cylinder. Python scripts can be added to improve the capability of the tool. Different add-ons are available online for free. You can also find many add-ons preinstalled in the software which you can activate by going to File, Preferences, Add-ons.

Rigging is an important feature in all 3D software. Blender provides some features to make rigging faster and easier. Mirror functionality is available which can be pretty handy if you have some symmetric shape to model (which is true in most case). You have to model just one side of the model and you can mirror it in any axis. It supports bone layers in which you can move different set of bones to different layers which can reduce confusion when you have a lot of bones in your model. Weight painting is also available you can paint body parts by selecting a bone.

Sculpting includes 20 different brush types. All these different brushes offer important sculpting modes. Using them creatively will help you sculpt anything out there. Mirrored sculpting helps you sculpt models which are symmetric. Just sculpt one axis and you can let Blender do the same for the opposite axis.

UV Unwrapping is used to wrap an image on a 3D object. Multiple UV layers are possible in Blender. You can also paint directly on the unwrapped image which will appear on the 3D object. You can also export the UV layout as .png file to continue working with other software as well.

There is also a game engine built right into Blender which supports OpenGL, dynamic lighting, toon shading, animated materials as well as Normal and Parallax Mapping. It also has a full bullet physics integration. You can port your 3D models right into the game engine and write scripts for the logic of the game. Playback of the game is possible in Blender without compiling or preprocessing.

You can import your raw video footage you have and can track any object or the camera movements and integrate your 3D space in Blender with it. You can get the real-time preview of your tracked footage. In this way you can be creative and create some amazing videos.

Blender also features the ability for you to edit your videos. This can be quite handy because video editing usually needs a separate software altogether for it. You have 32 tracks for adding your media (video, audio, images, etc) into the timeline. There are also features like speed control, adjustment layers, transitions, keyframes, filters and more.

To conclude, let me tell you that Blender is indeed a great tool for developing 3D content. Blender has been used in many TV commercials. It is used by NASA for publicly available 3D models. In fact NASA used Blender and Blend4Web to develop an interactive web application to celebrate the 3rd anniversary of the Curiosity rover landing on Mars. Other than that many short films were also created using Blender. So, with all these possibilities that Blender has there is no reason that you shouldn't give it a try. Okay, now head on to their official page and download the latest version of Blender and enjoy making 3D content for free.

Do they provide any tutorial guide with the software? That is, is it also for the newbies to try their hands with?

Yes, they provide online help. Just go to Help and click on Manual. It will open in a browser. Actually 3D tools are harder than most other software applications, but as a beginner you can find plenty of tutorials on YouTube. You can also check out blender basics on cgcookie.