Truly Google Now On Tap is one of the
best features that came with Android Marshmallow update. It scans your screen and presents quite useful and valuable information based on what you are doing.
It makes automatic guesses - and accurate enough at that - about what you' are searching on your device and presents the information even before you think of it. 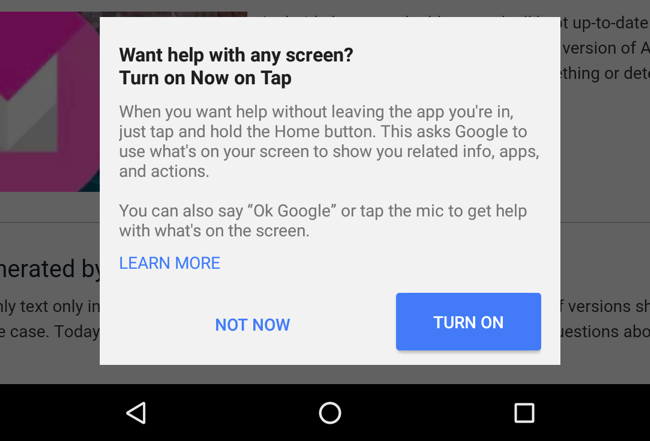 What is Google Now on Tap?

Google Now made its first appearance with Android 4.1 Jelly Bean. It was the first attempt by Google to become smarter. It can be accessed on any Android device by installing Google Now launcher from Play Store. You will be able to access Google Now by swiping to the leftmost home screen on your device. It gives you information in the forum of cards - any information that it thinks you are searching for. Right from tracking your online purchases based on the emails you receive to the weather at your location, or from directions to your home or work (depending on the time of the day) to scores from the sports you have been following. In short, it keeps track of all your activities with your smartphone and presents the cards based on your frequent tasks.
In fact, it was designed to compete with Siri on iOS and Cortana on Windows. It believes in providing you the information even before you ask for it. Just like what Cortana has always been doing and Siri has been planning with iOS 9.

Google Now on Tap takes it still further in terms of functionality. The search which was limited to Google services now extends to the apps as well. Whenever you "pull up" (how to do is what we will discuss later in the article) Google Now, it scans your screen and comes up with suggestions in the form of what Google calls Cards. To explain it, let me say you are listening to a song on your phone and pull up Google Now on Tap. It will come up with information on the artist or further information on the track you have been listening. You are having a chat with a friend and he mentions a movie, pulling up Google Now on Tap will suggest movies running nearby, options to book tickets or info on the cinemas playing the movie. Crux of the matter is - instead of searching for things manually, just pull up Google Now and it searches it for you.

Well, it is quite easy to get it to work for you. You can pull up Google Now on Tap from any screen. Just press and hold the Home Button and Google Now on Tap fires up. This used to open Google Now before, but after Android Marshmallow, the shortcut opens Google Now on Tap. The shortcut may differ on a few devices. Use the one that your device needs you to do. On opening it for the first time, you will be asked to switch the feature on.
Whichever app or screen you are on, just fire up the service and you will get the information on what you want. You may also open it by saying "OK Google".

How is the performance?

Well, the results are quite accurate most of the time. You can expect on the dot cards if the subject is clear enough. There are times when the service falters. For instance, it may not fetch correct results when you are discussing a movie on a chat app, but plus up accurate info when you are checking it on a movie website. However, it's just the beginning and we may need to wait to see the full functionality once the apps integrate the feature more deeper into themselves.
As of now, we can see the feature works just great when used with Google services. On a YouTube video, if you fire it up via "OK Google" and ask "Who's that artist?" - you will get the exact response. But the same thing may or may not work on a third party app even with the same video. Hopefully, Google will read into our feedback and come up with improvements in further releases.

I must say it is one of the best virtual assistants out there - even better than Apple's Siri or Windows's Cortana. It works flawlessly most of the time. Getting the information you wanted almost effortlessly and without any manual intervention is much needed functionality. There are instances wherein it falters, but I am sure Google will iron them out in the forthcoming updates. Be sure your Google Play Services and Google App are updated to be able to use the service. It's really quite impressive and handy too.