There are many browsers in the market serving specific type of user base. For example, Midori is a minimalist browser that serves users who wish to use less bloated browser. Chrome and Firefox are primarily targeted browsers towards those who want more control and improve their productivity. Some are still locked to internet explorer and Edge due to legacy support reasons for their work.

Where does Vivaldi stands in this? Vivaldi started as a fork of Opera 12 which had a number of good features like MyOpera which later sacked in future releases. The current focus of Vivaldi is towards serving the former Opera 12 power user community with the focus on productivity features.

Looking at the set of features that Vivaldi is offering, anyone can find this browser competitive and an alternative to popular browsers in the desktop market. Let's take a look at some of the new features of the Vivaldi browser. 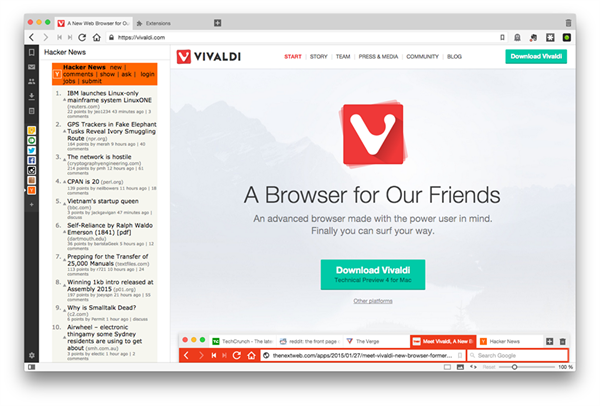 This feature allows more control over the browser using keyboard. You can literally navigate in between the links by holding down the shift button with arrow keys. The navigation system also lets you control where you want to see the tabs on the screen. It helps navigating in between the tabs more easier and you don't have to use the mouse more for browsing through stacked tabs.

Every browser these days allows you to create a profile and using that it syncs your browser bookmarks, history and settings on cloud server. I personally use Xmarks for the same operation as it helps me share the settings across different browsers. However, if you just want to use the Vivaldi browser from here onward then using their built in sync feature is helpful. It stores all your settings, bookmarks and shortcuts on cloud.

Vivaldi makes use of Blink rendering engine. The same engine used in Opera browser after they switched from presto rendering engine. As the blink is based on the fork of Chromium engine, you can expect the same rendering experience to that of Chrome browser. If you are automation tester then you may find that like Opera there is no official webdriver support for Vivaldi as of yet. They may support the selenium webdriver in near future but for now there is no official driver being released for the Vivaldi.

This feature is more like an enhancement that allows your browser to change color like a chameleon. For example, using twitter you get sky blue color around the tab whereas using Facebook gives your interface the navy blue color. Though I don't find any real use for this feature, however most of the time colors affect our user experience and for that reason this is a good feature.

Microsoft Edge offers built-in notes system and it also supports Microsoft Office Notes within it's interface. Vivaldi has also implemented a similar feature in the browser. It works by simply letting you capture the screenshot, add the notes and then save it for the later. If you compare this feature in between the browsers, you may find Vivaldi more effective.

Vivaldi has a built-in bookmark client that can be used to sync across multiple computers. Unlike Mozilla's sync which is broken on regular intervals, I found services like Xmarks more effective than browser based bookmarks. Vivaldi allows you to sync up the bookmarks, tag them and sort them on the cloud interface. This feature is handy especially if you are serious about storing bookmarks on your browsers.

Firefox and Chrome let you to stack your tabs in a single group. And then when you navigate each group, you get to access the tabs within that particular group. This way you don't have to maintain multiple browser instances. The same feature is implemented in Vivaldi as well with more controls. Compared to other browsers, it takes time to get used to new way of accessing tab stack in Vivaldi.

Most of the browsers don't include the email client embedded with their interface. Vivaldi approaches this problem a lot differently than the others. The preview version of this client is called M3. It is yet to make a final appearance in the browser. Once it releases in the final version, you'll be able to use single email client for all your mails. This saves a lot of time signing in to multiple email IDs and using an external client definitely saves the time.

Like any other browser, Vivaldi has yet to implement extension system in the final version of the browser. As the rendering engine is based on Blink, you can expect the extension to be similar to that of Chrome. Once the extension API is released, you can expect the Extension store to open within the browser. It may take time for your favorite extension to join Vivaldi but in future it is going to happen. You can still use the chrome web-store extension unofficially, and some of the add-ons will work just fine.

As of now the browser is released in a beta version, so there are going to be few bugs along the way. For now you can just test it out and only migrate to this browser once they release the final version.

Vivaldi is far from complete and there are plenty of features on which it can improve upon in future releases. This doesn't make the browser any less competitive though, as it is packed with the features that most of the popular browsers offer. For those who don't want to use bloated Firefox and Edge browser, Vivaldi is a good option once it releases the final version.