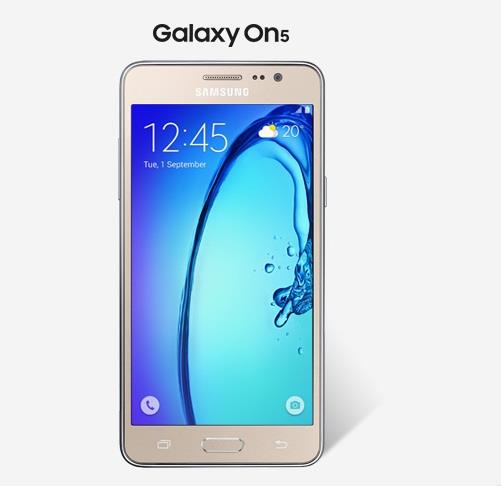 Samsung has never been into having fancy looks for its devices. The new Galaxy On5 just carries forward the traditional design we have come to see on Samsung devices. It does have a plastic rear cover, yet you feel the smartphone being quite premium with its rubberised finish. The texture aids in a better grip and thus the phone is comfortable in handling.
There are the usual physical Home button and the capacitive Back and Menu keys that flank it on either side. The power button sits on the right side, while the left edge houses the volume rockers. The side bezels in the front are quite slimmer, thus giving a more screen area.

The physical dimensions read 142.3x72.1x8.5mm. The phone tilts the scales at 149 grams. Bottom of the device appear a little broader than the top. You can buy the smartphone in Black and Gold color options. The Gold colored variant looks gorgeous and elegant.
In a departure from what has been observed in the Galaxy J5, the phone does not have a ambient light sensor. You need to adjust the brightness manually. All in all, the smartphone is quite sturdy and appears durable despite of being made from plastic.

It sports a 5.0 inch TFT capacitive display. The screen does have HD resolution at 720x1280 pixels. For those who may miss the AMOLED screens on the Samsung phones, the firm will stun you with what it has been able to do with a TFT display. If you play a YouTube video at 720p resolution on a high end smartphone and Galaxy On5, you will not be able to differentiate between the two. You really need to be a pixel peeper to find the differences.
The display offers you a 294 ppi pixel density which is good for a budget range device. The color reproduction is quite smooth. The screen is, however, a finger print magnet and it becomes more evident since the screen is more reflective. There is no protection of any sort for the display. So be careful while you handle your Galaxy On5.

Samsung seems to have ditched the Snapdragon processors in its entirety. The phone is powered by the in-house Exynos 3475 quadcore processor. The clock speed of the processor is 1.3 GHz which is satisfactory for a mid range smartphone. The processor is not the faster one, but it works fine on a budget device. If you are a heavy multitasker, the 1.5 GB onboard RAM may be insufficient. It becomes more of an issue in today's heavy apps. On a fresh boot, you will get around 500 MB RAM free. The device comes with 8 GB internal storage which is on quite a lower side when you have devices with minimum 16 GB internal memory. However, you have the memory expansion option. You can add an additional 128 GB of storage via microSD card.
As far as gaming is concerned, the smartphone does not much disappoint you. The HD display and the efficient Mali-T720 GPU render the graphics quite smoothly. Extremely high end games like Asphalt 8 face lags and frame drops, but you can have a better experience with the low quality mode.
Well, now coming to the issue of heating up - yes, the device does heat up a little when used for high end game play of more than 25 minutes or so. However, the temperatures do not rise up to the alarming levels as has been observed with some Snapdragon powered devices.

Samsung Galaxy On5 runs on Android Lollipop 5.1.1. The customisation is by TouchWiz as has been the standard case with a Samsung smartphone. TouchWiz has always drawn flak for its lags and slow transitions. However, the reinvented TouchWiz interface is now quite leaner. Emphasis has been on making the UI more performance friendly and snappy. Unlike tons of bloatware that came with earlier versions of TouchWiz UI, there has been a limited number now.
There are no gesture support as has been common with the current range of affordable devices.

The smartphone carries a 8 MP rear camera with LED flash support. The camera does perform better. It is really an improvement over the J series. You also have auto focus. The rear camera is capable of better performance than any other 8 MP snappers out there. The color saturation is quite impressive enough. However, there are instances of over saturation in some shots.
The camera app is quite similar to what has been offered on other Samsung devices. It offers you a wide range of modes and settings. The interface of the camera app is quite clean and user friendly. You have access to modes like Panorama, Auto, Manual and Continuous shots. It can record HD videos at 1080p. The device has Optical Image Stabilisation which could be a good thing for the people with shaky hands.
On the front, you have a 5 MP snapper. It does take decent snaps. It also has options like Wide Selfie and Interval Shots.

The Galaxy On5 packs in a 2600 mAh battery. Though it seems to be on the lower side, you could not have expected it to have higher capacity given its size. Moreover, the Exynos processor is stated to be efficient in optimal usage of battery capacity. You get two power saving modes on the device - Normal and Ultra. For all the practical purposes, it would be better to use the normal mode, leaving the Ultra mode for emergency conditions. Samsung has stated that the battery provides a standard talktime of 15 hours on 3G.
The phone offers you the dual SIM functionality. It does come with 4G support on both the SIMs. Other connectivity options include WiFi, GPS, Bluetooth 4.1 and microUSB. The device also supports USB OTG so that you can connect your external drives to the phone and access the files stored on them.

The Galaxy On5 has been made available exclusively on Flipkart. Aimed at the low price Chinese smartphones, Samsung has priced the new device at Rs. 8990.
Flipkat offers exchange offers as well. You get Rs. 4000 off on your existing devices in working condition with display being intact. EMI options are also available. If you have American Express card or Standard Chartered card, you will get additional 10% instant cash back on check out.

Maybe Samsung Galaxy On5 is not your favourite affordable device as you would be getting better options even at a lower price. But, coming from a well known brand that has a specialised niche in the premium segment - it could be a better buy. You have better alternatives in the form of a Coolpad Note 3 or a Honor Holly, however if you are looking for a renowned brand identity with a good after sales service network - then Galaxy On5 is better option.