OnePlus seems to be on the run to make India it's second home. They have released their third smartphone within a couple of months from launching the OnePlus Two. A true Made in India device as it is being manufactured in Hyderabad, India. Does it differ much from the OnePlus Two? The two phones appear to have almost similar looks and features, yet have subtle differences. Let us differentiate them based on a few key areas. 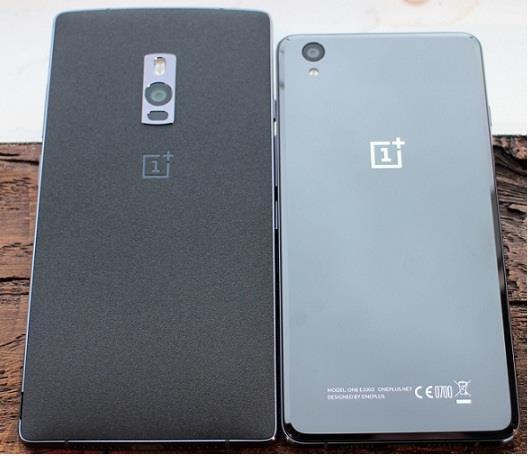 There is clear departure in terms of looks. OnePlus X is more premium-ish than its elder brother. It has a metal frame running around the body. The chamfered edges make it more high quality in looks. The OnePlus X has glass construction on both front and rear. You have Gorilla Glass 3 protection. Also there is a limited edition ceramic version coming up by the end of November.
On the other hand, OnePlus Two has more better and stronger Gorilla Glass 4 protection, but it lacks the glass on the rear side. However, it has swappable back covers.

The OnePlus X is more stylish than the OnePlus Two. It has a better build quality than the older device. Not that the OnePlus Two is ugly in any way, but when it comes to style and decency, OnePlus X scores over the elder sibling.

OnePlus X is more comfortable to handle with its smaller size. It sports a 5 inch full HD screen. OnePlus Two has a bigger 5.5 inch screen. It shares the same full HD resolution as on the newer device. Quite naturally, OnePlus X has a better pixel density, thanks to its smaller size. But, it doesn't mean a bigger difference though. The pixel density on OnePlus X reads 441 ppi, while that on OnePlus Two is 401 ppi. The display will be little more detailed on OnePlus X among the two.
The display technology, however, on both the devices differs, and that makes a huge difference. OnePlus X uses AMOLED technology, while OnePlus Two has a LCD display. The AMOLED screen offers you nice colors and rich contrast. It renders clear blacks and vivid colors. Besides, since AMOLED display is battery efficient, it will be much economical in terms of battery backup.

This is one area where OnePlus Two scores over the OnePlus X. One plus X is powered by Qualcomm Snapdragon 801 processor. It is a quad core processor running at 2.3 GHz clock speed. The graphics are handled by Adreno 330 GPU. It is easily outshone by the Qualcomm Snapdragon 810 octa core processor that has a 1.82 GHz clock speed. Besides that it has a Adreno 430 GPU.
It clearly means OnePlus Two has better processing speed and capable of handling resource hungry heavy apps quite effortlessly. The advaced GPU should mean better graphics. However, the Snapdragon 801 is not bad either. It's just that the older device has a better hardware in comparison.
The two devices are almost similar in terms of storage and RAM. OnePlus X has a whopping 3 GB RAM and 16 GB internal storage. OnePlus Two, on the other hand, has 3 GB RAM on 16 GB version and a mammoth 4 GB RAM on the 64 GB variant.
OnePlus X offers you memory expansion options wherein you can expand the storage by up to 128 GB, while OnePlus Two has no such feature. However, you will need to sacrifice the dual SIM compatibility as the second SIM slot doubles up as microSD card slot.
So, the basic model of OnePlus Two has almost same specifications as on OnePlus X. But, the high capacity variant makes OnePlus Two a winner in the performance section.

Both OnePlus X and OnePlus Two carry the same 13 MP rear camera. But there is a big difference in terms of the aperture. OnePlus X has a f/2.2 aperture, while you get a f/2.0 aperture on OnePlus Two. This difference translates into better low light photography on the OnePlus Two. The images shot on it look more sharper than those on OnePlus X.Apart from that, OnePlus Two has Laser Auto focus and Optical Image Stabilisation.
With reference to front camera standards, you get a 8 MP front snapper on the OnePlus X. One Plus Two lags behind with its 5 MP front camera. That is where the new gen phone takes a lead on the elder brother.
Having said that both the devices share the similar camera functionality, with the OnePlus Two taking a slight edge over the latest phone.

OnePlus definitely dwarfs the OnePlus X with its mammoth battery capacity. It offers you an exceptional 3300 mAh battery as compared to the 2525 mAh battery on OnePlus X. You may be able to save on battery usage on account of the AMOLED screen. The AMOLED display ensures lower battery usage by the screen as it needs to illuminate only the needed pixels rather than the whole screen. Also the low end quad core processor needs less power to run the phone as compared to the octa core processor on OnePlus Two.
OnePlus Two employs USB- C type connector in sharp contrast to the microUSB port on OnePlus X. The former ensures faster charging and better transfer speeds. It is quite strange to see microUSB connectivity on the new phone after launching the new technology on the OnePlus Two. However, OnePlus X supports Quick Charging which is not available on OnePlus Two.

OnePlus X is cheaper when compared to the OnePlus Two. You can get a OnePlus Two at Rs. 24999. The Onyx Black version is priced at Rs. 16999. Both the phones will be available exclusively on Amazon. The major issue with any OnePlus smartphone is the infamous invite system for purchase. You may get the device if you are lucky.

Both OnePlus Two and OnePlus X offer you a lot of similarities. Both are attractive in their own right. On the looks point of view, OnePlus X is more premium and has better build quality. If you want a better performer, OnePlus Two should be the primary choice. But, from the point of a pocketable and affordable device which can help you out with your basic tasks - then OnePlus X could be a great buy.