Last couple of months have witnessed a refreshing air for both Apple and Google fans. The iOS 9 was released in September, while October saw the launch of latest Android update - Android Marshmallow 6.0. With the two major platforms coming up with the latest updates almost simultaneously, I thought it would be great idea to compare them on a few important aspects. While you are set out to read this comparison, please bear in mind that this is not an attempt to move you away from either of these platforms.
In fact, both of them have been benefitting and taking cues from each other. Taking better ideas from each rivalling camp is always a good step from the consumer point of view. Let us set out on the journey to compare the two OSs. 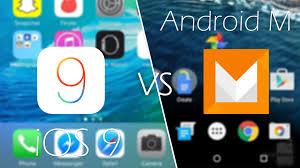 Apple has not made any major changes to the interface from the previous erosion. There is a change in font style and that's what ends at the design front. However, in terms of user benefits - there is now an "intelligent OS" at your service. Apple seems to have picked up the lead from what Google has done to Google Now. There are a few context sensitive optimisations which track your usage and location to optimise user experience. The iOS now has an embedded API that lets developers integrate their apps to the operating system. You are now free to check scores of your favourite game from the iOS search bar without having to go to the concerned app.

Android Marshmallow too keeps the same Material Design appearance from Android Lollipop. There are a couple of subtle changes like in the new clock app. The changes that came with Lollipop have been further refined and optimised in the latest iteration of the software. Homescreen can now be rotated. There are a few added improvements like better RAM manager. The RAM manager now lets you check app based RAM usage. It is highly useful for the developers to find the issues with their apps and rectify them.

The Google Now on Tap feature lets you get context based information at your fingertips. Almost on the similar lines as iOS, Android Marshmallow provides custom chrome tabs for the developers to help integrate their apps with the platform.

Both Google and Apple have taken a leaf out from each other's design book. It is a great bonhomie from the consumer point of view as it will help us get more from both of them.

The virtual assistant has always been a fierce battleground for almost all operating systems. Each of Google Now and Siri have something to be boastful about (there is a third player from Windows - Cortana who is promising enough as a competitor). Google Now On Tap is the smartest ever feature that comes with Android Marshmallow. Google Now will now understand the context of your query and come up with most relevant results. A long press on the Home button will now bring up the most contextual information on your screen based purely on what you have been doing. For instance, if you are in a chat with a friend on a movie program, Google Now will bring up the details of the movies playing nearby.
iOS too is making efforts providing such contextual information. Though not effective as on Android, yet it is quite innovative.

Well, this is what we always keep watching out for with each update. Android has paid much attention to preserving more of your battery juice. In addition to a few under the hood improvements, there is a feature named Doze which limits all your background processes whenever the phone is idle. You also have App Standby feature which will restrict the background processes of your app whenever the phone is in standby. The USB-C connectivity provides faster charging.

Arguably, the Doze feature on Android is quite better and reliable. It depends on the motion sensors on your phone to determine whether your phone is idle and accordingly powers your phone down. IOS is not quite capable of such feature.

Android is trying to catch up with Apple. After failing quite miserably with Google Wallet service, there is a new attempt at reviving the service by rebranding it as Android Pay. Google claims to have tied up with most of the credit card companies. Also the system will work by creating virtual accounts thereby making payments and transactions secure. The service will work with NFC. An added advantage is the finger print scanner support which makes the feature available on a wider range of devices.

Mobile payments are currently the the biggest positive for the iOS.

Android Marshmallow has brought a new dimension to the security feature. The revamped app permissions have an added security layer. You can grant permission to the apps to access your data or hardware on need basis. You can deny permission for a particular task and yet keep using the app as you would normally do. This is a feature Android has brought from Apple.

iOS gathers your personal information and tracks your phone usage. It also sends algorithms via your emails. However, Apple claims that all the information so collected is stored on your device.

In terms of security and privacy, iOS has always been numero uno, but it is good to see Android catching it up.

This is an area where Apple takes the lead. It is compatible with older devices. iOS 9 is supported on eight models of iPhone up to iPhone 4! This is something unheard of in Android arena. Google has a policy of supporting a device only up to 18 months after manufacture. So, you will not get Android Marshmallow if your device is more than two years old.

Both the updates are bringing in a few radical changes. It is quite evident to see the development of each OS borrowing the best features from each other. Not that these newly added features will make you switch sides so instantly. If you are an Android fan, you will probably remain so. The same goes for someone devoted to an Apple. However, it must be interesting to note that both the platforms are almost catching in on features thereby leaving little difference. A few years later, maybe we will all see two different OSs which are completely identical.