Asus launched their new range in tablets - Zenpad with the Zenpad 8.0 and Zenpad 7.0. As said before, they excelled with their Transformer range of devices. However, the later Phonepad and Memopad could not click much. Now buoyed by the success of the Zenfone series in smartphones - especially with Zenfone 2 - Asus has now extended the Zen branding to its tablets range as well. Zenpad 8.0 is one such endeavor. But, will it succeed in matching the performance shown by Zenfone? Here is an attempt at analysing the possibilities, or lack of it. 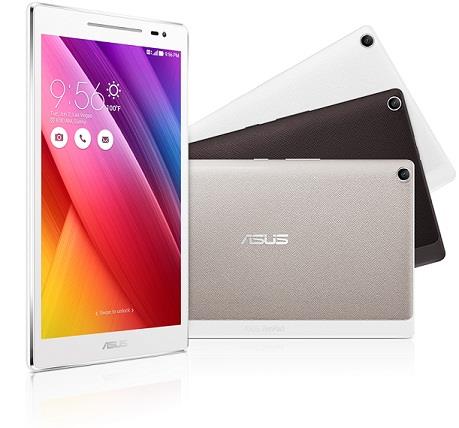 The look and feel

Though the Zenpad 8.0 carries the brand name Zen, the similarity with its smartphone sibling ends there. The device completely differs from the Zenfone branded smartphones. There is no concentric circle design as has been a regular feature of Zenfone range. There are no physical navigation buttons either.
The physical dimensions read 209x123x8.5 mm. It features embossed leather design. The screen occupies around 75% of the front. There is a metal strip running around the screen. The metal coated frame is made of NCVM - Non Conductive Vacuum Metalization technique. The tablet weighs 350 grams which should be comfortable from the tablet point of view.
The power button and volume rockers sit on the right side of the device, while the microUSB port and the audio jack find the position on the top. The removable back cover has a rough finish. Though it gives a rubber look from far, yet the quality of the material is not premium.
You have the options of three color variants viz Leather Black, Pearl White and Aurora Metallic. You can also add more beauty by using the Asus Zen Cases which are available in Black, White, Aurora Metallic, Blue and Orange color variants. A special attraction for the fair sex may be - you can use them to match your mood, or the dress on a particular day! Asus knows that people these days want a device that blends well with their personality.

The Asus Zenpad 8.0 sports a 8.0 inch WXGA display. The resolution reads 1280x800. The high definition IPS display has a 189 ppi pixel density. The resolution is quite low for such large screen size. Asus could have provided a full HD resolution. Given the fact that they offer full HD on their smartphones even at lesser price than what costs this tablet, it is quite surprising indeed.
The screen has a anti-fingerprint coating. You have 10 point multi touch support which could be a good news for the gamers out there. It has a 178 degree viewing angle which again is quite good for viewing videos.
The sunlight legibility is quite good. The tablet comes with Asus trademark TruVivid technology thereby ensuring better reading in sunlight.
Yes, you would not get the kind of experience that you would on a super AMOLED screen of a Samsung Tablet like Samsung Galaxy Tab S2 , but given the price you are paying for the device, there should be no reason to crib.

The Asus Zenpad 8.0 is powered by Qualcomm Snapdragon 615 octacore processor. The clock speed reads an impressive 1.4 GHz. You can safely say that it houses the best in class hardware at this price range. Coupled with 2 GB RAM, you can be sure of effective multitasking functionality.
The tablet has a 16 GB internal storage capacity. You can expand it up to another 64 GB with a microSD card.

The device performs well with regular Web browsing, watching movies or playing a couple of games. The 2 GB RAM helps in getting an almost lag free functioning. There is an issue with high end gaming though. The tablet tends to heat up which may have been because of the Snapdragon processor. Switching between multiple apps is quite lag free.
Bench marks for the device are a little low as has been reported by a couple of review sites. The call quality and general performance are in line with what has been observed in the devices using the Snapdragon processors. The graphics and normal operations are handled quite comfortably.

The Asus Zenpad 8.0 runs on Android Lollipop 5.0 with customisation by ZenUI. The interface looks similar to what we have observed in Asus smartphones. This being a tablet, you may need to make some adjustments from the Lollipop settings. The UI is easy to use and offers a good deal of customisations. So, you can set your tablet as per your needs.
However, ZenUI is notorious for its heavy dose of bloatware. There are many preinstalled apps which eat up your precious storage space, and the sad part is they cannot be uninstalled.
Apart from that, the UI has nothing more to be disturbed about. It does support gestures. You can specify up to six gestures for launching the apps. You can lock or unlock the screen with a double tap without any need to use the physical keys.
The software has a Kids Mode wherein parents can set which apps are visible to their kids. Rest of the apps and folders can be safeguarded using password.

Camera on a tablet - on any tablet, for that matter - has nothing much to write about. The device comes with a 8 MP rear camera. There is no flash. The images shot on it lack in detail. They are only good as backup photos.
The front snapper has a resolution of 2.1 MP. The quality of the selfie shots are not up to the mark. The front camera seems suitable for video chatting than for taking selfies.
The rear camera can record videos at 1080p while the front snapper is capable of a 720p video recording. But, the quality leaves a lot to be desired. The camera on this tablet is just a enhancement feature and just that. Period.

The tablet is powered by a 4000 mAh battery. Asus has always excelled in its choice of battery capacity on its devices. The battery provides you a full day backup even with a heavy usage. The video loop tests have shown that it could provide a backup of 12 hours. The results are quite good for a tablet.
The phone has usual connectivity features like Bluetooth 4.0, WiFi and GPS. You get 4G connectivity on the tablet.

Anything else worth noting?

Yes, definitely. The tablet comes with a unique accessory in the form of Audio Cover. Costing an additional Rs. 3000, it will enhance the quality and volume levels of the audio on your tablet. The additional cover will also double up as a case for your tablet. It also works a small a stand for the tablet using which you can watch your videos in a comfortable position. In fact, since it is an important accessory, I would be happy to get this cover as a standard accessory than a chargeable one.
The Asus Zenpad comes with Kindle App preinstalled. The good viewing quality of the display coupled with a large screen size should make your reading experience quite strain free.

The tablet has been priced at Rs. 14999 for the basic version. You may need to shell out another Rs. 3000 for the audio cover. As said before, since a tablet is normally used for media experience - it would have been a better strategy on the part of Asus to offer the cover as a standard accessory out of the box. Compared to the high end tabs, you can buy it for almost half the price.

The truth of the day is smartphones are becoming larger. The 5 inch screen has been turning to be the norm for smartphones of late. In such a scenario, tablets are losing their identity. Asus seems to be not giving up as yet. The Zenpad 8.0 could be a good bargain given its robust processor, good audio quality and mammoth battery capacity. The only drawbacks are the low resolution display and cheaper looking back cover.
If you are not much interested in camera and high end gaming performance, the Asus Zenpad 8.0 is worth the buy.