The Dazen Note 3 is probably the best effort as of now from Coolpad. Being the first and only device with the fingerprint scanner at this price segment, it seems to be a strong attempt at garnering a better market share. What could make this phone tick in the already crowded budget range smartphone market? That is exactly what we are planning to get to know about in the following paragraphs.

With physical dimensions of 151x77x9.3 mm, the phone has a traditional look. It weighs 155 grams. The design elements do not differ from what we have been seeing on most of the devices out there. The bottom end of the screen features the regular capacitive buttons for Home, Back and options.
Coolpad has made an attempt at keeping a large screen to body ratio by thinning out the bezels. There is a chrome frame running around the body. The edges are curved towards the rear side. This is what we call innovation. Though it looks a simple design element, you will notice that it gives you a better grip. On the left side sits the volume rocker while the right side is the home for power button. Bottom edge houses the microUSB port and the top edge positions the audio jack.
Rear side of the phone will show you the camera and an LED flash. And then here comes the USP of the phone - the finger print scanner. It is in fact a unique addition at this price point.
The phone does not feel bulky and heavy. It has more to do with the thoughtful design on the part of the manufacturer. The phone is quite comfortable while handling despite its bigger screen size.

The Coolpad Note 3 sports a 5.5 inch display at a HD resolution. The screen resolution reads 720x 1280. The IPS display renders better viewing angles. You also get a better sunlight legibility. There is the usual Gorilla Glass 3 protection against scratches and damages. But the screen is a finger print magnet. It does catch a lot of smudges. Lack of full HD is a concern for some of us. But given that the smartphone has been made available at the budget range of pricing, the HD screen should not be something you ought to cry about.

The colors on the screen appear quite vibrant and vivid. Though the display is capable of good outdoor legibility, the screen tends to be a little more reflective.

Coolpad Note 3 is powered by MediaTek MT6753 Octa core processor. The 1.3 GHz clock speed ensures a reasonably good performance. The processor is 64 bit compatible. It makes it an efficient taskmaster with improved operational ability. You also get increased RAM management capabilities. Though the clock speed is not as high as some of its competitors, still the octacore processor manages the everyday tasks quite smoothly. Coupled with it, the 3 GB RAM helps you get a superb multitasking experience. That is one of the best features you have on a device at this price band.

Graphics are handled by Mali T720 MP2 GPU. The phone has a good boot up time. The device has gathered good benchmark points in several tests by review sites.

As said before, the finger print scanner is a welcome addition at this price point. It has been positioned inside a hollow recess on the rear side. This again a thoughtful design indeed which effectively prevents accidental activations. The scanner does work flawlessly and is quite impressive with its performance. The initial scanning and further logins are much faster.

The smartphone has a 16 GB inbuilt memory. Of this, you can use 10.9 GB while the rest goes for the system use. You have expandable memory support using microSD card. You can add up another 64 GB of storage space.

The phone carries a 13 MP rear camera. You can shoot good images in bright light. The images snapped have a lot of detail. The colors appear quite vibrant and vivid. The low light images are quite good with controlled noise levels. The f/2.0 aperture takes in just a reasonable amount of light to provide the images with quite comfortable clarity.

The images in low light appear a little washed out. Poorly lit shots are average in quality. The shadowy areas get completely lost at times.

The camera app offers you a few effects and modes like HDR. There is a PRO mode which lets you change the settings for white balance, exposure and ISO. The camera is capable of HD video recording abilities.

The 5 MP front camera is capable of decent selfies. There are beauty shot modes available which applies some effects to the shots taken to make them look better. You can use the finger print scanner to take selfies.

The device runs on Android Lollipop 5.1. Customisation is provided by what Coolpad calls Cool UI. The software performs smoothly enough. There is a feature named Multitask which is akin to what we have seen in Samsung Galaxy series where it is called Multiwindow. You can use two apps simultaneously on a single screen. However, it gives rise to some lag while you use it.

The UI does seem to resemble iOS. The software lacks app drawer. The apps are arranged in a grid on the home screen itself. Some of us may not like it as it completely differs from what we have been used on our Droids. However, you can install third party launchers of your preference to change the UI as per your liking. There are not many pre installed apps. Some useful and now necessary apps like Facebook, WhatsApp and Amazon along with certain other apps like WeChat, Xplore and WPS Office. There are a couple of Coolpad branded apps like Cool Store and Cool Services. The Cool Service is an app that lists all service outlets of Coolpad based on the location. It also provides you Google Maps integration. The Cool Store is just a customised app store which serves nothing more than Play Store.

The software has support for gestures. You can open certain apps using gestures on the lock screen itself. In a nutshell, the software is quite light and good to use.

Battery and other other features

Coolpad Note 3 is powered by a 3000 mAh massive powerhouse. A normal usage should give you a day's backup. Battery tests have revealed a good standby time. It has been observed to have almost 10 days standby time under normal conditions. The video loop tests have given a satisfactory result of around 8 hours.

The phone has two charging modes - Efficient which is nothing but a Quick Charging mode and Common. The battery takes a bit longer to charge itself. It has been observed to take around 3 to 4 hours to charge the battery fully.

In terms connectivity, well - it is a dual SIM device. There is 4G compatibility which has become a standard for the budget range devices now. Other connectivity options include WiFi, GPS, Blue tooth and microUSB. There is no NFC though which could be a reason to be disappointed about. As a sign of relief, however, you get USB OTG support which is much in demand of late. 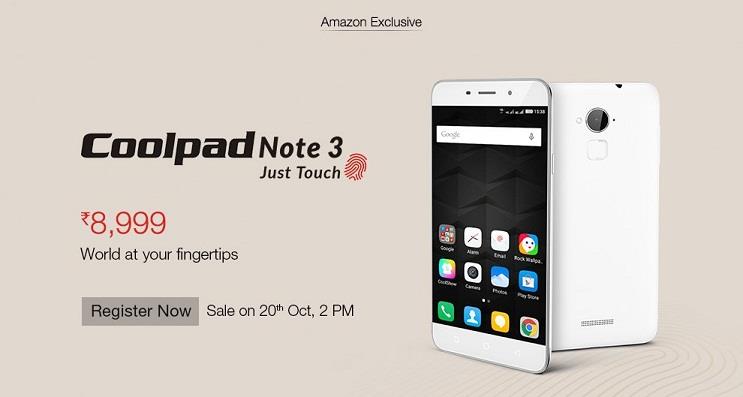 The all powerful smartphone is priced at an amazing Rs. 8999. Coolpad has an exclusive tie up with Amazon India. The device will go on sale on October 20. The registrations have already begun.

Well, I must say that the Coolpad Note 3 does fare in the face of competition quite well. It has great design, a good camera and satisfactory performance. It is the first and probably the only smartphone to feature fingerprint scanner at this price point. To be frank, Coolpad does offer a stiff competition to the rivals like Lenovo K3 Note, Xiaomi Mi4i and Meizu M2 a good run for the it money.

If you want to buy a good smartphone with fingerprint scanner, better and larger display and a good camera, but have a tight budget - then Coolpad Note 3 is definitely worth buying.