Gionee was one of the first earliest Chinese manufacturers to enter India. They have always engaged themselves in being the glamour guys with their offerings. The Gionee Elife S5.1 was touted as the slimmest smartphone in the world.
Now, as a first one to come out in the new fashion range of smartphones from the company, Gionee F103 just plans to excel in the crowded sub 10K price band with its unique features. Here is an attempt in finding out the innards of this new phone. 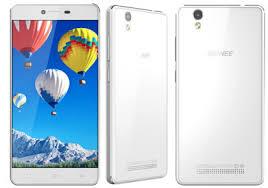 The 5 inch screen used to be treated as a big screen just a couple of months ago. Nowadays, we have been seeing a large numbers of devices coming up with screen sizes beyond 5 inch. Looks wise, the phone does not appear much elegant as we have come to expect from Gionee. As far as handling comfort is concerned, I would be forced to say that the phone features sharp edges. Looking at how the phone looks, I would not treat it being fashionable.

The back cover is made of plastic. Power button and volume rockers sit at the right edge, while the bottom edge has a place for the microUSB. The audio jack is positioned at the top edge.

In essence, the phone does not impress much with its look and feel. It hurts, especially when the device is positioned as a fashion series phone.

Gionee F103 sports a 5 inch HD screen. The resolution of the screen reads 1280x720. You get an average pixel density of just 294 ppi. It should be a worth noting fact that the competing phones like Yu Yureka Plus have full HD screens, yet are priced lower than Gionee offering. Obviously, it results in good chunk of prospective buyers shying away from the phone.

There are reports of stuttering when it comes to animations.

The Gionee F103 comes with a 8 MP rear camera. The rear camera features an LED flash. I would have to add that the camera performance is not that great. The default camera app is simple and works fine. The shots however, lack detail. There is much noise in the images. There are no manual settings. 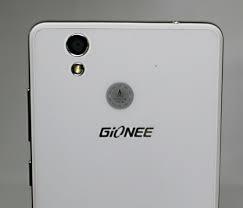 There are certain issues with the focusing properly. At times, the focusing fails miserably with the loss of details. Close ups are not worthy at all. If this is a software related issue, we just hope that Gionee soon comes with a fix. The rear camera is capable of HD video recording at 1080p.

The phone has a 5 MP front snapper. It performs quite flawlessly in your needs of selfies. It can record HD videos at 720p.

In short, if you are photography centred, and are in the habit of pulling out your smartphone at every available instant, I would advice you not to go for Gionee F103. It is definitely not for camera buffs.

The Gionee F103 is powered by MediaTek MT6735 quad core processor. The clock speed is a good 1.3 GHz. The GPU on the phone Mali- T720 does show good performance in rendering satisfactory graphics. The processor is 64 bit compatible, which makes the phone kind of future proof. You will get better computational abilities and improved performance. It also helps you get efficient resource management.

The Gionee F103 assures a good multitasking experience with its 2 GB on board RAM. The internal storage on the device is 16 GB, out of which around 10 GB is available to user. You can expand the memory by another 32 GB using a microSD card.
When it comes to performance, well - the phone is quite a satisfactory performer on tune with most of the devices below its price range. But, there are certain shortcomings when compared to the smartphones in its own price bracket. The phone suffers from heat issues and lags when playing resource hungry games like Angry Birds 2. Not that the performance is totally bad, yet comparisons become inevitable as you get better performers equipped with Snapdragon 615 which undoubtedly, is one of the top notch processors. And you get better performance at the same price! High end apps have also been observed to have severe battery drain issues on Gionee F 103.
Well,I will conclude that the phone does not offer much in terms of being a great performer, but yes - it is not bad either.

The Gionee F103 runs on Amigo OS 3.0 - it's own operating system. Though based on Android Lollipop, the interface is not that exciting. There is too much customisation which leaves one yearning for true Android feeling. Most of the settings and functioning of Android functions have been altered considerably. There are some transitions which tend to be laggy.
There is a certain amount of bloat ware that comes pre installed, but fortunately - you can unintelligible them if you feel you do not need them. There is much emphasis on themes it seems. There is one aspect I liked - the appearance and look. They are quite appealing, keeping itself in tune with the launch of the device in the fashion series.
The OS consumes almost 50 to 60% of RAM. It clearly is an indication that Gionee needs to fine tune it's Amigo OS. Heavy usage of RAM by the firmware results in lags and stuttering while using resource heavy apps.

The Gionee F103 does have a 2400 mAh battery which is claimed to have better backup. However, it has been observed that the battery drains up quite faster while playing some heavy games. This could have to do with the inefficiency of the processor. The video loop tests have shown a backup of around 10 hours. It means the battery may not be able to meet a full day backup under normal circumstances.

The Gionee F103 offers you a dual SIM functionality. You get 4G compatibility on both the SIMs. One of the best part with the device is you do not need to sacrifice the dual SIM functionality if you want expandable memory (we have come to experience such a tendency of late). Apart from that, you have access to all other regular connectivity options like WiFi, GPS, Bluetooth and microUSB. You also get the USB OTG functionality on the phone which is an added advantage. It will help you connect your external drives to your phone to view the files stored on those drives.

The device has been made available at Rs. 9999. As a gesture of luring more. Unstone rs into its fold, Gionee is offering additional accessories with the phone. You get a screen guard, a plastic cover and a OTG cable inside the box. It is really a great offer from consumer point of view as most of the manufacturers have been drastically reducing the box contents.

The on-paper specifications match with practically thousands of devices available in its price band. The Gionee does not offer anything special with the F103. Actually, except the better size and looks - nothing really excels. Camera, as said before, is not a upto the mark. Photography fans would better stay away from the phone. There are heat issues observed while working with resource hungry apps. I would advice you to opt for other better options like Yu Yureka Plus and Asus Zenfone 2.