Motorola has always been enthusiastic with the X branding. The newest entrants in the X range of smartphones from the Motorola stable are Moto X Play and Moto X Style. While Moto X Style has been launched in the premium segment, the Moto X Play has been marketed as a midrange budget device. Positioned in the same gang of great flagships like One Plus Two. One Plus Two - incidentally is labelled as the " flagship killer of 2016". Which one among the two is worthy of being referred to as a real flagship? We will make an attempt at understanding the rivals. 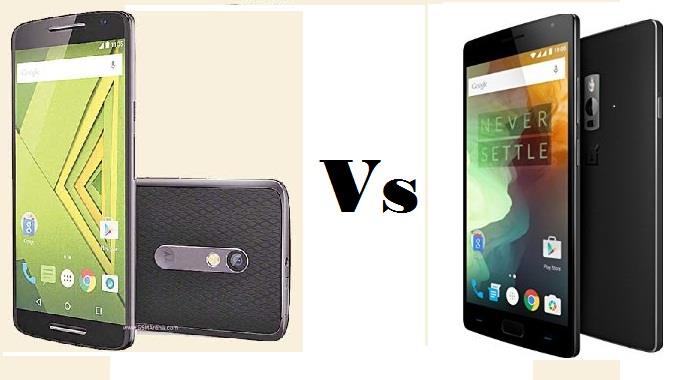 One Plus Two carries forward the design language initiated by One Plus One. By default, the device comes in the Sandstone back cover. Apart from it, you can get the phone in a multiple options of back covers. You may opt for Bamboo, Black Apricot, Rosewood and Kevlar. It has capacitive menu buttons which go off when not in use. The physical dimensions of One Plus Two reads 151.8x 74.9 x9.85 mm while it weighs 175 grams.

Moto X Play is also quite great in terms of looks. Its edges have metallic finish. Back cover has a awesome pattern. The physical dimensions read 148x75x10.9mm. It tilts the scales at 169 grams. So, that makes One Plus Two slightly larger and heavier in comparison to Moto X Play.

Moto X features IP57 level water repellent screen. Though it lacks the water resistance feature provided on Moto G 3rd Gen, you get a little relief from water related damages. The One Plus Two does not have any such feature. One Plus Two has a unique feature named Alert Slider. The slider switch on the phone lets you choose between three notification options - All Notifications, Favourite notifications and No Notifications. You can change between the different modes just by flicking the slider without having to waking up or unlocking the phone. Another feature that sets One Plus Two apart from Moto X Play is the finger print scanner.

I do not think I can pinpoint any one of them to be good looking than the other. One Plus Two excels with its swap covers, Moto X Play has great looks in its own right.

The Moto X Play sports a 5.5 inch IPS display. You get a full HD screen at 1920x1080 resolution. The phone has an excellent pixel density of 403 ppi. Motorola has provided the Corning Gorilla Glass protection for the screen.

One Plus Two, on the other hand comes with the same 5.5 inch screen at the similar full HD resolution of 1920x1080. But, it has LTPS screen. The protection is provided by the latest Corning Gorilla Glass 4 as compared to the Gorilla Glass 3 on Moto X Play. It gives a slight edge to One Plus Two over the latest iteration of Moto X.

The Heart and Soul

One Plus Two is powered by the latest Qualcomm Snapdragon 810. It is an octa core processor that is 64 bit compatible. The operating frequency of the processor is 1.8 GHz. The phone offers you an excellent performance. The 4 GB on board RAM should be more than enough for an efficient multitasking capability. It offers you a mammoth 64 GB internal memory which should suffice most of your requirements. But, surprisingly and sadly enough, you won't be able to expand the storage any further because it does not come with memory expansion options.

Moto X Play too has an octa core processor which is 64 bit compatible. But, it uses the slightly low end Qualcomm Snapdragon 615 processor. The clock speed measures slightly lower at 1.7 GHz. The device carries just 2 GB of RAM. It should be enough for an effective multitasking experience, but still you may face a few lags compared to One Plus Two with its 4 GB RAM. The phone comes in two different arias in terms of internal storage. You can either go for a 16 GB version or a 32 GB version. But, given a minor price difference between the two variants, I really doubt the logic behind two versions. You can expand the memory further by another 128 GB.

So, I would conclude - if you are a power user who needs a lot of processing power, you will be happy with One Plus Two. While if you are one of those who uses the phone a big lot of personal files, I would advice you to opt for the Moto X Play.

One Plus Two runs on its own Oxygen OS which is based on Android Lollipop. It is one of those leaner skins in sharp contrast to what we have been witnessing on the Chinese flagships of late. It too gives you a near stock Android feel.

The Moto X series has always received bad reviews for its camera quality. Motorola has however taken the lead and introduced a 21 MP rear camera with dual tone flash. It comes with a f/2.0 aperture apart from other features like geo tagging, HDR and Panorama. The camera is capable of high definition video recording at 1080p. You can also record slow motion videos at 450p. The phone also has a 5 MP front snapper that shoots images that are quite satisfactory.

There are reports about some issues with proper focusing. The problem is more pronounced while shooting some close up snaps.

One Plus Two carries a 13 MP rear camera with dual LED flash. The camera has a 6 element lens and laser auto focus. It can record 4K videos unlike Moto X Play. You also have slow motion video recording capability at 720p. There is a 5 MP front snapper which works satisfactorily. There are some problems with focusing, but One Plus has stated that they are coming up with software updates to fix the issues (In fact, the updates have already arrived).

One Plus Two has a 3300 mAh battery that should obviously provide you more than a days backup. Moto X Play comes with a massive 3630 mAh capacity battery. The battery is non removable. You should be able to get more than a day's backup with it too. Motorola claims that you can continue using the phone for two days on a single charge. Though, it may appear a little exaggerated statement, several battery tests have proved a backup of almost 13 hours with heavy usage.

One Plus Two offers you 4G compatibility. That apart, you also get the regular connectivity options like WiFi, Bluetooth 4.1, GPS and DLNA. One of the unique features provided by One Plus Two is the USB-C connector. The connector has its own set of advantages. You can connect it either ways. It provides you faster data transfer speeds. However, it comes with a catch that you will not be able to to use the regular microUSB chargers available in the market.
Moto X Play offers 4G connectivity. It also has the similar connectivity options like dual SIM compatibility, WiFi, Bluetooth 4.1, GPS and microUSB.

The One plus Two is priced at Rs. 24999. One Plus has an exclusive tie up with Amazon India and will be available only by invite. Motorola has come up with a fierce marketing strategy to compete with the rivals. It is available at Rs. 18499 for the 16 GB variant while 32 GB version will be available at Rs. 19999. Looking at the minor price difference between the two versions, it would be a better option to go for the higher memory. Moto X Play is available exclusively on Flipkart.

Well, Moto X Play is not really a flagship, it's a budget smartphone catering to mid Le el price bracket. It doe not call itself a flagship either. One Plus Two is much better placed than the Moto offering. It excels in processing power and RAM. On the other hand, Moto X Play offers you more storage and better camera. Moto X Play is expected to come up with timely software updates. Decision is dependent on what you would prefer.