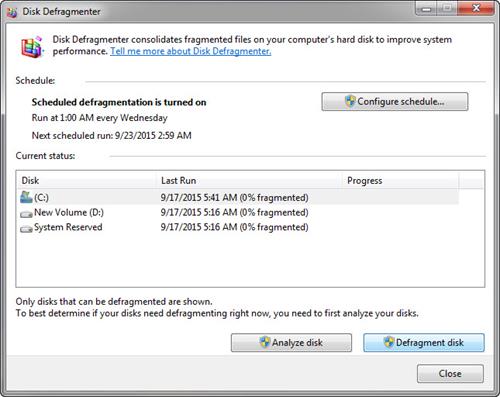 In this article we going to review some of the defragmentation tools that you can use in Windows 10.

Windows 10 still has the default built-in app to defrag the system. However like most of the built in apps from Microsoft, this app isn't very effective. The default app doesn't have any advanced features however it can get the job done for the most basic disk defragmentation. The app is also good to use if you want to run it automatically using Scheduler option. It's not very effective in terms of performance improvement and file access speed. However, if you don't trust any ad supported defragment tool, then use the built-in defragmentation tool instead.

This is one of the fastest defrag app out there for Windows. It helps speed up startup and file opening. Compared to most of the apps out there, it takes less time to defrag the drives. You can also schedule the defragment process. File copying will also be faster once the defragmentation process is finished. You'll also find performance improvement after running the tool. You can test the performance by launching large size file or simply opening a system heavy game. It is free of cost and there are no features locked out on this software. If you are unsure about which disk defragment tool to choose, then choose Smart defrag.

MyDefrag is not your typical defragment app. Apart from GUI interface for defragment tool, it offers you a way to create scripts that can do the work for you. It also comes up with various defrag scripts that you can use right away. While running this tool you are supposed to keep the computer idle. The defragment process is comparatively slow. However after finishing the process you'll find performance improvement. It also has a command line version and screensaver that you can use while running defrag process on your hard disk. The best part is that this app is free to download and use.

Auslogics' defrag tool is relatively quicker to process files compared to other files. You can also feel the improvement while handling large files. It can run as per schedule and you don't have to worry about performing file scan. Though the defragment process isn't quick, it does a much better job at improving the performance. I found the usage of this app more effective compared to any other apps. There is also a premium version available with more features.

This defragment tool is from the makers of the app CCleaner. This tool is also free of cost for basic usage. There is a feature called quick defrag that lets you quickly defrag files for quicker access. You don't require full system scan before running this tool. Like most of the Piriform tools, this app is also portable and you can run it from a USB device. You can also schedule the file defragmenter or let the tool run in the background to complete the process.

When it comes to disk defragmentation you have plenty of apps to choose from. You can test the above apps and see which one suits best to your needs. Regardless of which app you choose, you may find improvement in your Windows performance after completing the defragment process.